As Microsoft snaps up Activision Blizzard for $68.7 billion to shore up its streaming platform, and Netflix also enters the sector, Sony — or even Disney — may be next to strike a deal.

In May 2016, Disney sent shock waves through the video game sector when it ended its stint as a publisher of console titles to, it said, “transition exclusively to a licensing model.” It later replicated that move in the mobile games space and let outside studios create projects built on its intellectual property like Star Wars, Marvel and Pixar. “We are good at making movies and television shows and theme parks and cruise ships and the like,” then-CEO Bob Iger said in 2019. “We have just never managed to demonstrate much skill on the publishing side of games.”

Most Hollywood giants have similarly retreated from video game ambitions. NBCUniversal shut down its game studio in 2019, before its current CEO, Jeff Shell, took over. And Discovery chief David Zaslav hasn’t detailed plans for Warner Bros. Interactive Entertainment once the company closes its mega-merger with WarnerMedia, currently led by CEO Jason Kilar, beyond saying it won’t require any asset sales to hit its debt-reduction targets. Some say it will take a bigger gaming footprint. Warners’ “Mortal Kombat is great IP, which has good value; the rest of what makes money is licensed product,” MKM Partners analyst Eric Handler says, adding that the gaming unit will be “a sub-scale business as part of Discovery/Warner.”

But some Wall Street observers question whether the rise of streaming video game services and a gaming M&A wave could sweep Hollywood players into the sector in a bigger way by motivating them to double down on their offerings or, alternatively, exit it for a lack of scale. As the old adage suggests, go big or go home. That has been true for the broader gaming sector. Three weeks into 2022, two gaming megadeals have put Wall Street focus squarely on what increasingly feels like an M&A free-for-all. Microsoft unveiled a $68.7 billion takeover of gaming publisher Activision Blizzard on Jan. 18, eight days after Take-Two Interactive’s $12.7 billion deal to acquire mobile game powerhouse Zynga (Words With Friends). Microsoft’s biggest deal ever, targeted to close in 2023, will bring together the Satya Nadella-led tech giant’s Xbox game platform and Xbox Game Studios with such Activision franchises as Call of Duty, Warcraft and Tony Hawk, creating one of the world’s biggest gaming companies.

The Activision megadeal is, among other pluses, seen as helping Microsoft’s growing Xbox Game Pass subscription service that costs $10 or $15 a month, depending on the tier, as it looks to become the Netflix of gaming. Meanwhile, Chinese conglomerate Tencent has online portal WeGame, while Sony’s PlayStation division is expected to launch a new, untitled service to compete later in 2022. And Netflix itself is trying to become a rival in the same space.

Netflix COO Greg Peters said Jan. 20 that the streamer was very focused on creating games based on its own franchises like Stranger Things but was also “open to licensing, accessing large game IP that people will recognize” starting this year. Asked why Netflix wasn’t making big gaming acquisitions, Peters sidestepped, calling all the recent deal activity “exciting,” adding, “To some degree, it is an endorsement of the core thesis that we have around subscription being a great model to connect consumers around the world with games and gaming experiences.”

On the M&A front, Sony is one name that has gotten a lot of attention, given its video game business accounts for more profit ($3.1 billion annually) than its film unit ($762 million). Sony lost $20 billion in market value after news of the Activision Blizzard deal but has said that it expects Microsoft to keep key Activision franchises available on its PlayStation. Wedbush analyst Michael Pachter argued in a Jan. 18 note that it was “likely that regulators will restrict the terms of the combination and require Microsoft to continue to offer Activision Blizzard (and perhaps other) games to Sony under substantially the same terms as it has been offered in the past.”

But others worry. “Is there any other way to look at this than Microsoft desiring exclusivity for Call of Duty, Overwatch and Diablo?” Cowen’s Doug Creutz asked in a Jan. 18 report. “We don’t think so.” Saying, “Sony’s response will be the one to watch,” MoffettNathanson’s Clay Griffin wrote: “Sony’s portfolio of exclusive intellectual property (Spider-Man, God of War, Horizon Forbidden West, etc.) has been hugely helpful to Sony’s platform, but a Microsoft-Activision combination significantly ups the ante.”

But tech giants beyond Microsoft are also in focus as potential buyers. “It’s not an unreasonable position to claim that game publishers are attractive M&A candidates for big tech companies that have the financial brawn to make the metaverse happen, but perhaps don’t have ready-made IP or core competency in producing gaming content that will be required for mass market acceptance,” wrote Griffin. “The balance sheets of Big Tech, all else equal, wouldn’t even notice acquiring these companies.”

Some wonder whether a big Sony buy is the answer but also note that recent deals have driven up several targets’ market values, such as Electronic Arts, maker of the Madden, FIFA, NHL and Medal of Honor franchises, and Ubisoft, the Assassin’s Creed and Just Dance home. Take-Two, publisher of Grand Theft Auto, could also be attractive if Sony wants to join the M&A tussle. For Sony, “EA is likely to be the favorite,” a team of analysts at Enders Analysis argued Jan. 19. But with EA’s market value at about $37 billion, Ubisoft and Take-Two may be “far cheaper” to buy, Enders concluded. 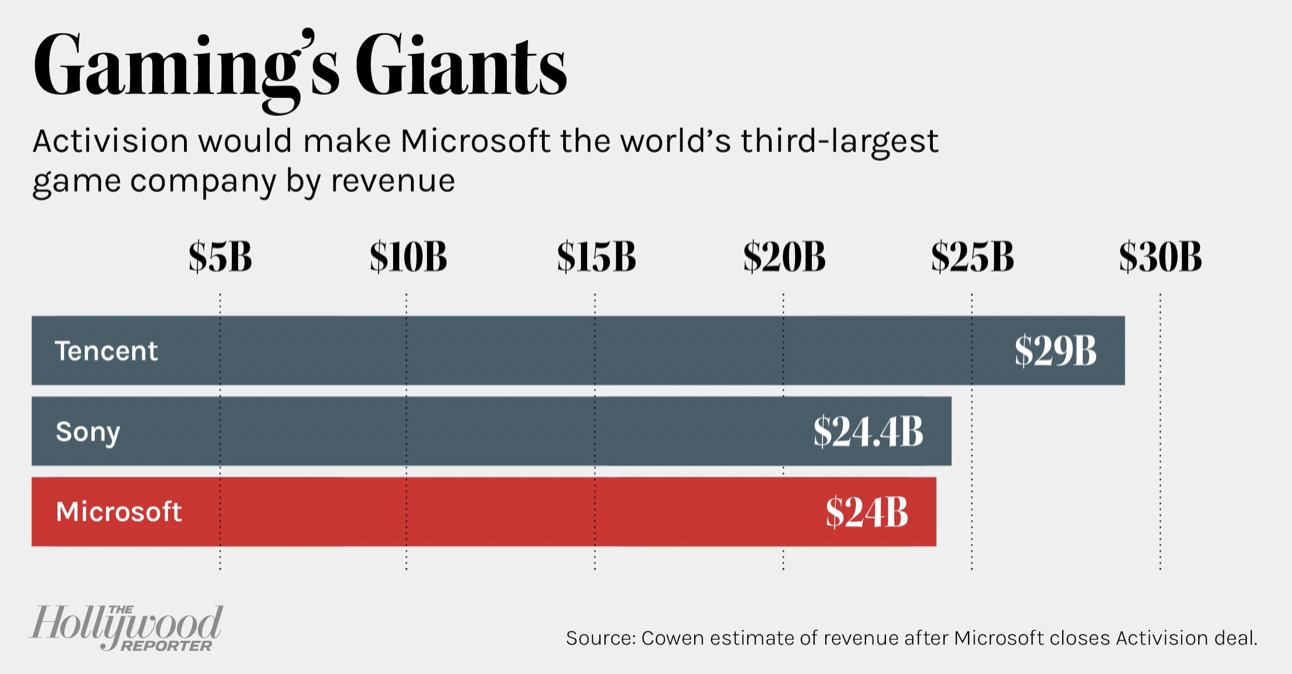 Meanwhile, Handler sees EA as a possible bold play for the Bob Chapek-led era at Disney, which has focused on licensed games rather than creating them in-house. “A great way for Disney to build upon its digital future and for Bob Chapek to step outside Bob Iger’s shadow would be to buy EA,” says Handler. “Combining EA Sports with ESPN could create a lot of unique opportunities, like a real sports metaverse.” While such a game-changing deal would mark a change of strategy for the company, Handler argues that it comes down to a bigger question: “Does Disney want to be old or new media? Video games is a $200 billion global industry and growing.”