The annual countdown starts at 6 p.m. ET when the ball is raised atop One Times Square — here’s how to watch the event for free.

If you purchase an independently reviewed product or service through a link on our website, The Hollywood Reporter may receive an affiliate commission. Note that prices and deals are accurate as of press time but may be subject to change.

After closing last year’s event to the public, Times Square is inviting masked and vaccinated revelers back for the 2022 New Year’s Eve ball drop in Manhattan. The annual New York spectacular is among the best 2022 celebrations that can be live-streamed online.

The ceremony kicks off at 3 p.m. PT/6 p.m. ET when the 12-foot geodesic sphere — which is covered in 2,688 Waterford Crystal triangles — will be raised at the top of One Times Square. The Christmas House star Jonathan Bennett returns to co-host the event alongside regular Times Square New Year’s Eve correspondent Jeremy Hassel. Pre-midnight festivities will include interviews with stars, hourly countdowns, backstage access and live musical performances. The free webcast ends at 12:15 a.m. ET.

This year’s headliner is Grammy-nominated artist KT Tunstall, who will perform her hits including “Black Horse and the Cherry Tree” and “Suddenly I See,” Tom Petty’s “I Won’t Back Down” and the tradition of John Lennon’s “Imagine.” The USO Show Troupe will perform “Stand by You,” “Empire State of Mind” and “A Military Salute.” Dance performances will include a “fitacular” routine by social media star and Boo! actress Liza Koshy (who has appeared on the YouTube channels of Kevin Hart and Zac Efron) on the Planet Fitness stage and a Chinese cultural dance showcase presented by the Sino-American Friendship Association. 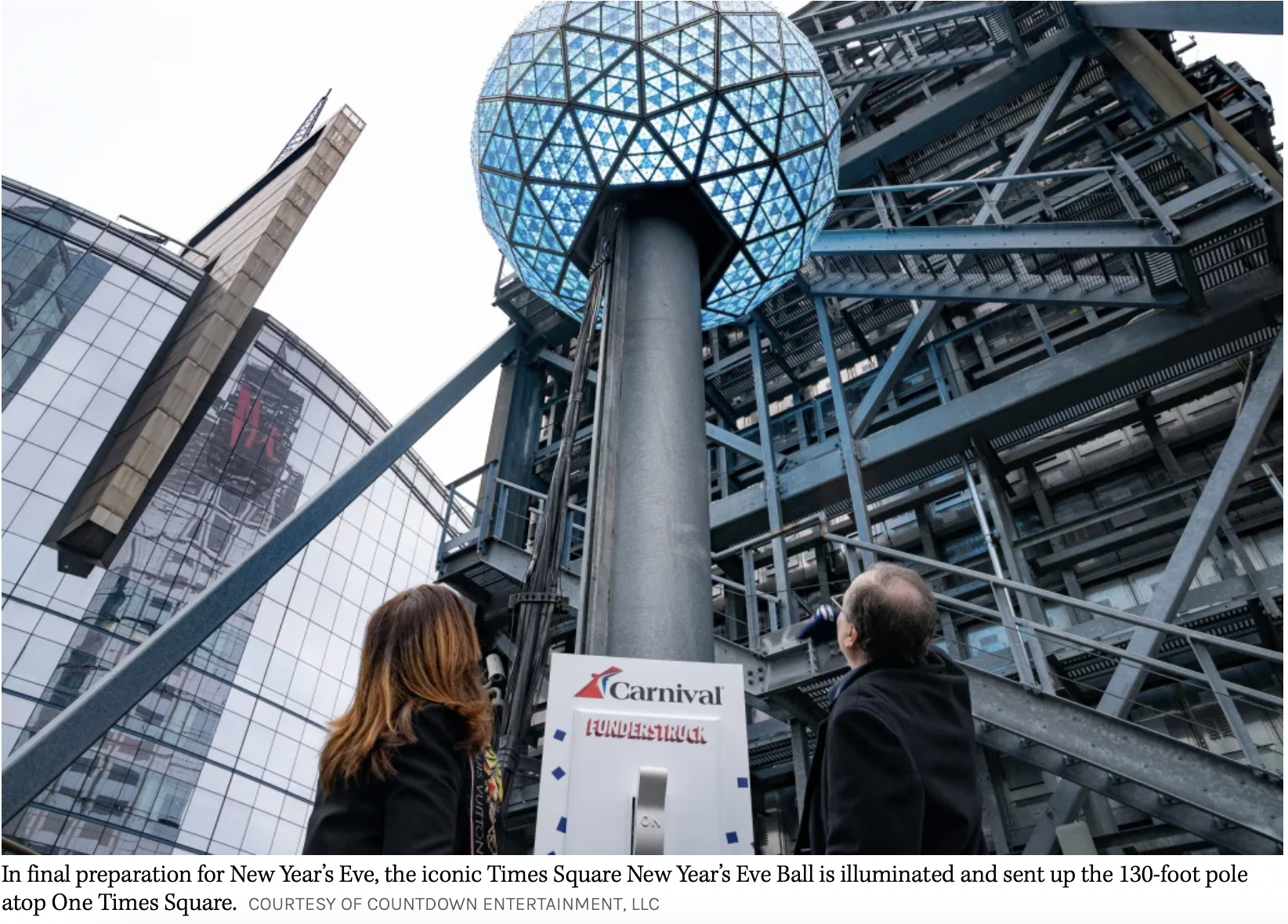 The Associated Press will also share a year-in-review newsreel of 2021’s most memorable headlines and the New York City Football Club will join the 11 p.m. hourly countdown with its first-ever MLS Cup trophy in tow.

Just like last year, audiences at home can attend the 2022 New Year’s Eve event through VNYE, which will host a commercial-free interactive experience with art, games and music. Viewers can select from multiple camera feeds and watch behind-the-scenes coverage and countdowns from around the world. The event can also be watched at Times Square’s website or VNYE.com.

Those who prefer to watch on a bigger screen can cast or screen mirror their web browser to a smart TV using Airplay, Amazon Fire TV, Google Chromecast or Roku, among other options.

Other performances at Times Square will include Chloë, Journey and Karol G at ABC’s Dick Clark’s New Year’s Rockin’ Eve hosted by Ryan Seacrest. (LL Cool J canceled his scheduled performance after testing positive for COVID-19.) CNN’s New Year’s Eve Live From Times Square co-hosted by Anderson Cooper and Andy Cohen will also air from the iconic intersection. Both events will air live starting at 5 p.m. PT/8 p.m. ET and can be viewed with cable or video-on-demand subscriptions, including Hulu with Live TV; ABC is also available on FuboTV, while DirectTV Stream and Sling TV offers access to CNN.