UPDATE 11/17/21: This story has been updated with new information about the turbo three-cylinder engine and pricing.

The 2022 Nissan Rogue, which was fully redesigned for the previous model year, is already getting an engine swap. Out is the naturally aspirated 2.5-liter inline-four, and in is a turbocharged 1.5-liter three-cylinder with innovative variable-compression-ratio tech.

Despite its smaller size, the turbocharged three packs a bigger punch than its four-pot predecessor. The 1.5-liter produces 201 horsepower and 225 pound-feet of torque compared with the 2.5-liter’s 181 horses and 181 pound-feet. Equipped with the latter powertrain, an all-wheel-drive Rogue we tested hit 60 mph in a class-competitive, albeit unremarkable, 8.2 seconds. We expect the new setup to trim about a half-second off that mark.

The debut of the new, smaller engine for the Rogue’s 2022 model year coincides with the introduction of Nissan’s latest Xtronic continuously variable automatic transmission (CVT). Its wider gear-ratio spread, reduced friction, and twin oil pump system are among the updates that are designed to increase fuel economy and improve shift responsiveness during aggressive driving.

The new powertrain in the 2022 Rogue makes the compact SUV feel considerably peppier, as we experienced during our first driving impressions. However, the switch to a variable-compression ratio is also intended to boost fuel-economy numbers. While Nissan is still awaiting final approval from the EPA for the ’22 Rogue’s city and highway estimates, the company says front-wheel-drive models will earn up to 33 mpg combined. That’s 3 mpg higher than the thriftiest 2021 Rogue. Likewise, nonhybrid rivals such as the Honda CR-V and Toyota RAV4both top out at 30 mpg combined. 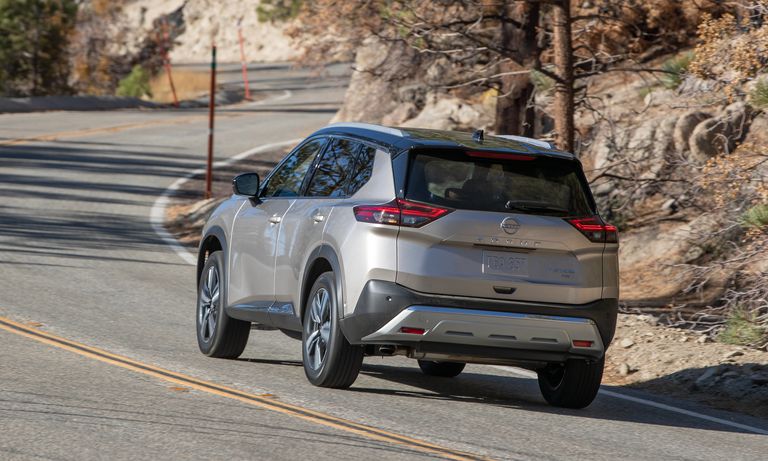 The 2022 Rogue family is expected to go on sale in January. Even though a new, more powerful powertrain is now part of the deal, the price increase is incremental. Front-drive models see a $650 uptick across the board and all-wheel-drive variants see a $750 surcharge. That equals a range of starting prices that span from $27,875 for the base S model to $39,155 for the top-of-the-line Platinum.