The 11th-generation Honda Civic breaks free from its predecessor’s design but keeps the good stuff.

The outgoing 10th-generation Honda Civic left a mark. Nimble, engaging, affordable, and efficient, that Civic had everything an entry-level car shopper could want. For those looking beyond entry level and toward performance, the Civic’s performance-minded siblings, the Civic Si and Type R offered even more excellence for not much more money. Now a new generation is here, and it has all of the things that made us love the last one, wrapped in a package that is a departure from its polarizing predecessor.

When we say the new car has all of the things that we loved about the last one, we mean that (almost) literally. Although the 2022 Civic is entering its 11th generation, the machinery is largely carried over from the 2021 model. Base versions are still powered by a 158-hp 2.0-liter four-cylinder, but the optional turbocharged 1.5-liter four-cylinder engine (tested here) gains 6 horsepower and 15 more pound-feet of torque compared to the last Civic, for a total of 180 hp and 177 pound-feet. 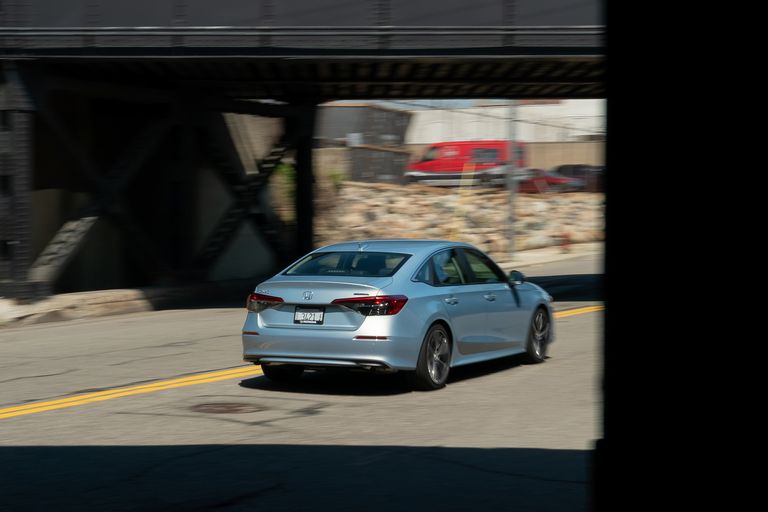 Both engines still come bolted to a continuously variable automatic transmission (CVT). Manual buyers are out of luck and will have to look to the performance-oriented models in the wings. The CVT and engines receive light changes to boost efficiency and minimize vibration. The fuel economy gains vary by trim level. The EPA estimates the 2.0-liter engine’s efficiency will improve by 1 mpg in the city and 2 mpg on the highway in the base LX trim—that’s 31 mpg city and 40 mpg highway for the new car. The 1.5-liter turbo engine has bumped up its EPA rating by 1 mpg in the city in both the EX and Touring trims for 33 and 31 mpg, respectively.

Our test of a 2022 Civic Touring suggests that those efficiency tweaks may have affected acceleration. With the turbo engine, the new Civic needs 7.5 seconds to accelerate to 60 mph and 15.8 seconds to cross the quarter-mile mark. We wrung out plenty of previous-gen Civics with the 1.5-liter turbo and a CVT, and they were all in the neighborhood of a 6.8-second sprint to 60 and a 15.2-second quarter-mile. The new car carries 130 more pounds, possibly gained in the interest of greater structural rigidity, but we’d expect that sort of weight gain to add just a tenth to 60-mph acceleration times. 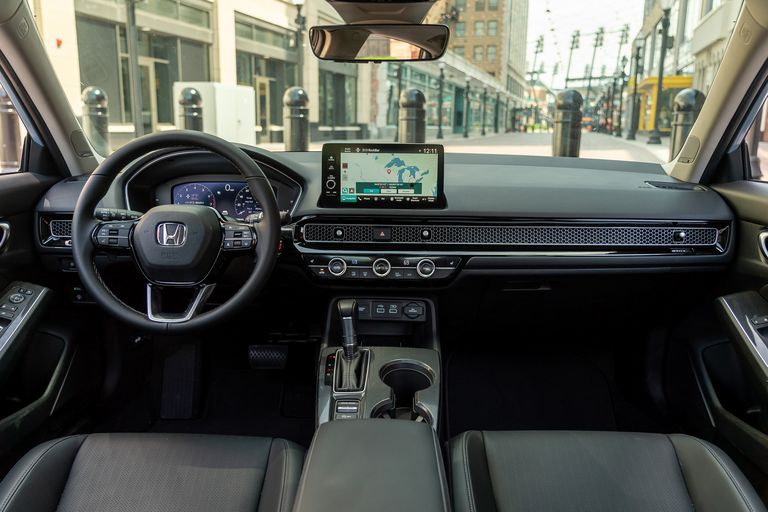 LOWS: Unexpectedly slower than before, the pulse-pounding models aren’t out yet, best content reserved for top trim.

Honda assures us that its internal tests showed only a 0.1- or 0.2-second gap between the old car and the new one, but our test car was slower in nearly every metric. Its rolling-start 5-to-60-mph figure slipped by 0.6 second, and while it matched the previous-generation car’s 4.0-second 30–50-mph passing time, the 50–70-mph time was worse by 0.2 second. We’re working on testing a second Civic, so we’ll have to see if our low-mile test car is an outlier or representative of the new model.

Given the mechanical similarities between the generations, the rest of the new Civic’s numbers line up almost exactly with the old car’s. A respectable skidpad grip result of 0.83 g on the Touring’s 18-inch all-season tires is no surprise, given that we already knew the Civic had stable and secure handling. The braking distance from 70 mph has shrunk by 4 feet to 174 feet in the 2022 model. The steering is just as light and accurate as it was in the previous-generation Civic. The basics of Honda’s entry-level sedan haven’t changed, and aside from slower-than-expected acceleration from our test car, we don’t mind. 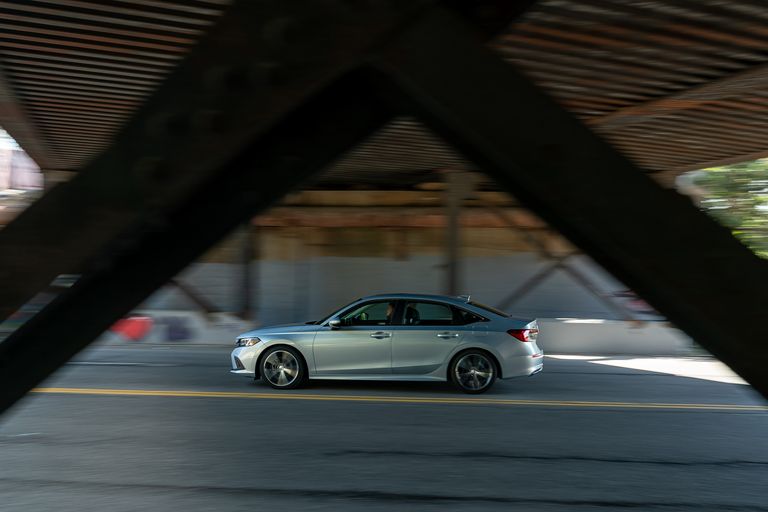 But that’s all prologue to what has changed about the Civic. Its looks have been totally overhauled, inside and out. Gone are the various cutlines and fake vents, replaced by a design that borrows heavily from the Accord and appears more premium and mature than the previous Civic.

Inside, the new Civic is comfortable and well thought out. A 1.4-inch longer wheelbase goes primarily toward the comfort of rear-seat passengers. Front seats are wider in the shoulders to fit bigger people more comfortably, and after several hours in them we emerged happy. The center console area is covered with a textured and attractive material instead of the currently trendy piano-black trim that looks great until it’s covered in fingerprints. At 70 mph, the new car registered 69 decibels, a significant 2 decibels below its predecessor. 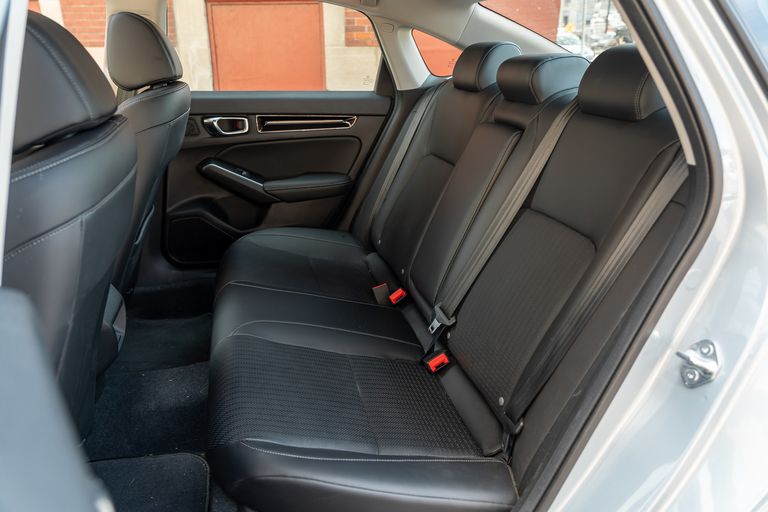 Some of the best features are reserved for top Touring models like our test car. The Touring has an easy-to-use 9.0-inch touchscreen infotainment system with a convenient ledge to rest your hand on while engaging with the screen. All models get a real and easy-to-use volume knob. There’s a Bose-branded audio system—a first for a Civic—plus a wireless charging pad.

More mature and upscale than its predecessor and much of its competition, Honda is largely holding the line on pricing. Base LX models will start at $22,695, which is $450 more than in 2021. The Touring trim costs $29,295, the same as the outgoing model. Perhaps the best news of all is that our favorite Civics are still awaiting the 11th-generation treatment. The Civic hatchback, which will be available with a manual transmission, is due to be revealed next week, and we’re expecting performance-oriented Si and Type R models in the months ahead. If those models look as good as this one does, we’ll all be in for a treat.