‘Harley Quinn’ co-creator Justin Halpern claims this scene was nixed by DC, and the internet has thoughts.

Batman can beat criminals to a pulp, take on supervillains and live a double life as a billionaire playboy and caped crusader … but he can’t, apparently, go downtown — not downtown Gotham City, he can, obviously, certainly go there, but he can’t go to, you know … the other downtown.

In a rather surprising revelation, the co-creator of the R-rated Harley Quinnanimated series told Variety that DC blocked the inclusion of a scene from the upcoming third season of the show where Batman was going to perform oral sex on Catwoman.

That alone is pretty eyebrow-raising. But what really set off fans Monday is the alleged reason the scene wasn’t included.

“In this third season of Harley [coming to HBO Max] we had a moment where Batman was going down on Catwoman,” Justin Halpern said. “And DC was like, ‘You can’t do that. You absolutely cannot do that.’ They’re like, ‘Heroes don’t do that.’”

Continued Halpern: “So, we said, ‘Are you saying heroes are just selfish lovers?’ They were like, ‘No, it’s that we sell consumer toys for heroes. It’s hard to sell a toy if Batman is also going down on someone.’”

Halpern made the comment in the context of noting how much creative freedom he’s otherwise enjoyed on the show. Superhero content creators are generally expected to abide by certain rules governing character behavior in order to protect the franchise and consumer products sales. That said, Bruce Wayne has seduced and discarded supermodels and Russian ballerinas like disposable props, in movie after movie, decade after decade, and that behavior apparently isn’t frowned upon. And Harley Quinn is considered a graphic show for adults. So in that context, objecting to giving a woman pleasure has struck some fans as a bit wrongheaded.

Social media is having some fun with this. 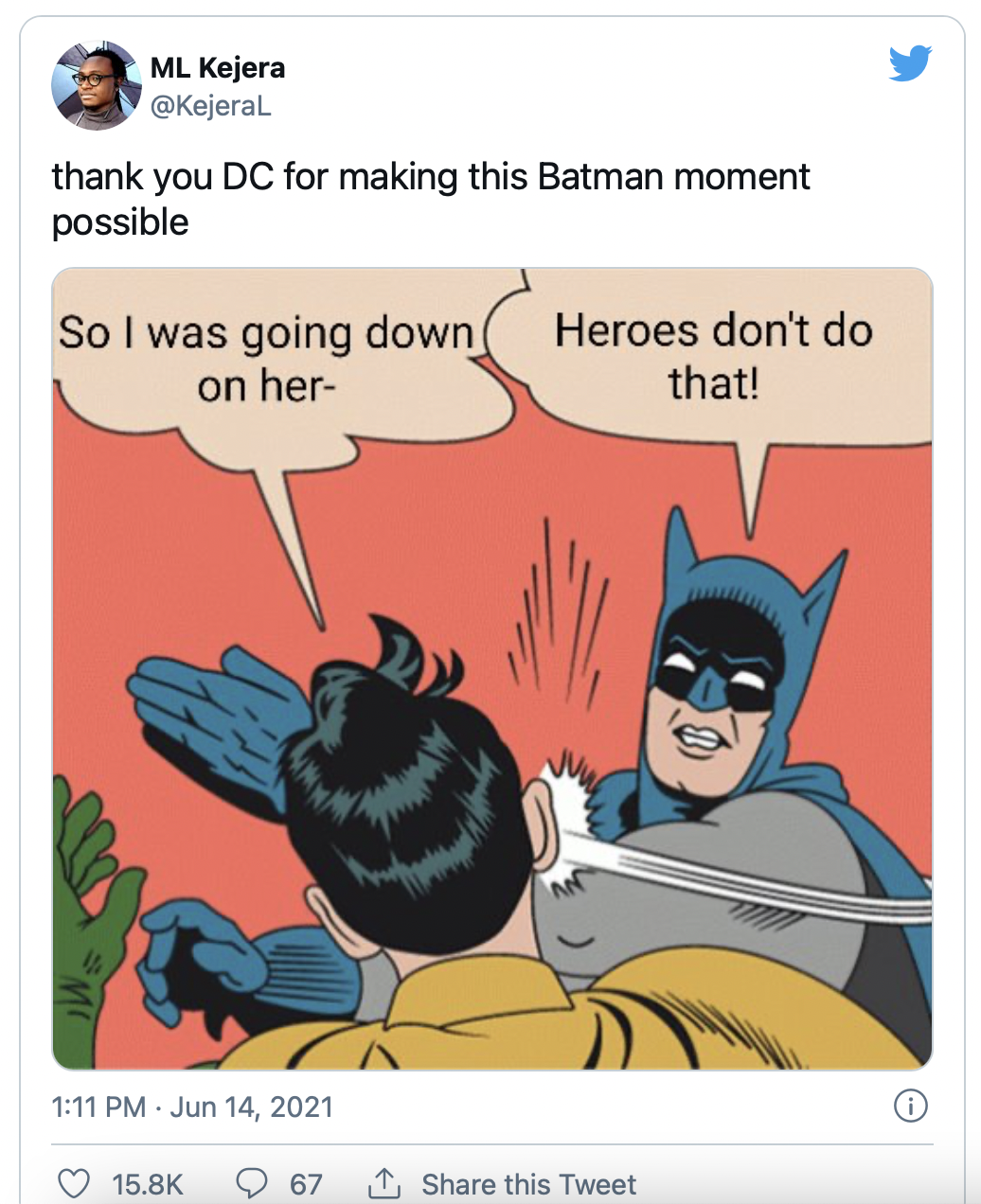 Harley Quinn aired its first two seasons on the DC Universe streaming series and is moving to HBO Max for season three. WarnerMedia and DC had no immediate comment.

DC is at least open to the idea of expressing a romantic side to its characters whereas rival Marvel is considered extremely chaste. In this week’s episode of The Hollywood Reporter’s ‘TV’s Top 5’ podcast, Loki writer Michael Waldron was asked about Marvel’s prudishness and whether the character Vision even has genitals. “Marvel can be a vessel to discuss just about anything,” Waldron replied. “It’s the biggest piece of entertainment in the world right now that encompasses such a large spectrum of fans and age ranges when you get into sexuality. Kids watching, questions of Vision’s genitals …  How much do you want to go into that stuff? That’s something you have to figure out and keep defining.”