The couple paid $8.4M for the nearly 3,000-square-foot house, which the late Universal Pictures chairman Tom Pollock once owned.

When the pregnancy rumors become too tedious or selecting those 10 wedding dresses for her upcoming nuptials becomes too stressful, Paris Hilton can now escape from her longtime Beverly Hills stronghold to the more laidback beach community of Malibu. Records reveal America’s favorite hotel heiress-turned-socialite-turned-business mogul and her fiancée Carter Reum — a venture capitalist and son of the late tycoon Robert Reum — have plunked down $8.4 million for an oceanfront house on desirable La Costa Beach.

Hilton, ever the crafty entrepreneur, has already filmed a promo video for her new Netflix show “Cooking With Paris” in the Malibu home’s kitchen. But when the cameras are off and she doesn’t feel like whipping up a plate of her famous lasagna, she can rest assured the house lies only a five minute drive to longtime celebrity hotspot Nobu Malibu.

Tax records say the roughly 3,000-square-foot house was built in 1955, but the place clearly underwent a big cosmetic overhaul sometime in the ’90s. While contemporary, the interiors also feel vintage in a way that’s only now just beginning to come back en vogue, with salmon-colored travertine and rounded-edge granite kitchen countertops galore. Naturally, there are also massive walls of glass and plenty of beachside deck space to absorb those spectacular ocean views.

While the $8.4 million price tag may seem like a lot of money — and it is — the seller’s side actually took a loss on the property. Records show the place last transferred way back in 2007 for the exact same $8.4 million amount to Tom Pollock, the now-deceased former chairman of Universal Pictures. With 14 years of carrying costs and hefty realtor commissions, the on-paper loss certainly ran into the hundreds of thousands.

Though it’s sited right atop bustling Pacific Coast Highway, the blocky contemporary home is nicely fortified from the street behind a navy blue wall. Naturally, there are also cameras and a sophisticated security system.

Behind the wall, a courtyard is landscaped simply for maintenance-free peace of mind. Per the listing, the courtyard has “room for yoga” or a “writing table.” Squint your eyes and the home’s stark white exterior might almost look like Mykonos. 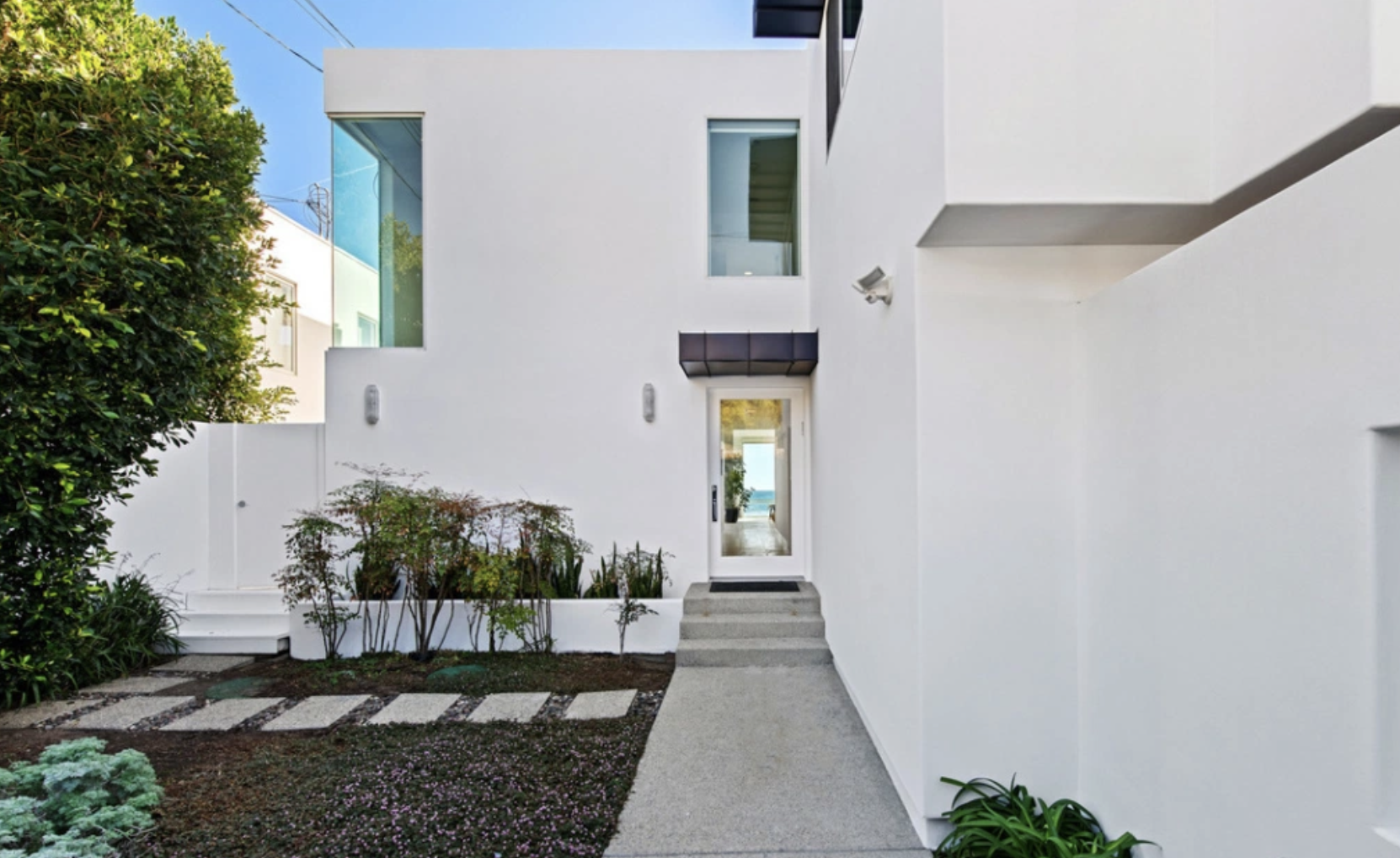 Outside, a concrete deck has room for a BBQ center, al fresco dining or casual lounging.

Undoubtedly Hilton’s favorite room of the house is the kitchen, which is perfect for her with its vaguely vintage, ’90s-meets-early-2000s vibe. High-grade stainless appliances and plenty of granite countertop space can accommodate any pro chef.

Salmon-colored tile stairs lead upstairs, where all three of the home’s bedrooms are located. The floors change to hardwood in the ocean-view master, which has its own balcony and fireplace. Lavish and lovably dated, the master bath offers a built-in soaking tub, glassy shower and dual vanities.

Stairs from the deck lead down to La Costa’s sandy beach. The property also includes a convenient outdoor shower.

Other amenities include an outdoor jacuzzi and two-car garage with “work station,” per the listing. And if they’re feeling neighborly, Hilton and Reum now share a beach with financial heavy hitters like Candy Spelling, Fashion Nova CEO Richard Saghian and Bosch creator Michael Connelly.

Besides the couple’s new Malibu digs, Hilton still owns her longtime primary residence in L.A.’s Mulholland Estates gated community, a Mediterranean-style mansion she picked up way back in 2007 for about $5.9 million. She’s also got a penthouse in one of New York City’s prewar boutique buildings, acquired in 2014 for $4.9 million.