Wonder what it’s like to see the world from a “left-handed” point of view?

On International Lefthanders Day, August 13, you get to explore that world for a day. Did you know Presidents Ronald Reagan, Bill Clinton and Barack Obama were all left-handed?  Rock out with Paul McCartney or Jimi Hendrix, the world’s greatest left-handed guitarist.  (Stevie Ray Vaughan, born right-handed, learned to play a left-handed guitar like his hero, Hendrix). There’s also Oprah Winfrey,  Julia Roberts and Lady Gaga, left-handers all.  In baseball, there were the legendary “southpaws,  Babe Ruth and Sandy Koufax.

International Lefthanders Day 2021 will be observed on the 13th of August to celebrate the differences and distinctiveness of left handed individuals.

This day day was first celebrated by Dean R. Campbell, founder of the Lefthanders International, Inc in 1976.

So, if you’re left-handed, grab your left-handed cup and make a toast to all left-handers, everywhere!

In a world dominated by right-handers, International Lefthanders Day on August 13 celebrates lefties and raises awareness on the issues faced by left-handers in their daily lives. The day was first observed by the founder of Lefthanders International, Inc. — Dean R. Campbell, in 1976. and has been celebrated every year since. From the 1600s, when left-handed people were thought of as being in cahoots with the devil, to the present day, they continue to face difficulties and challenges in accomplishing tasks.

The Left-Handers Club was founded in 1990 with the mission statement to keep members up to date with developments and to serve as a bridge between the views of left-handers and manufacturers. The club also provides help and assistance to those who require it, and they continuously conduct research on left-handedness and new items that can offer lefties increased ease of use. The number of members has been increasing with participants from all over the world since the club’s formation. As of now, the club is highly regarded and revered as a pressure group representing all left-handers.

Continuing the tradition created by Campbell, the Left-Handers Club launched International Lefthanders Day as a part of their organization on August 13, 1992. The aim was to create awareness of the advantages and disadvantages of left-handedness. The holiday is now celebrated worldwide, with 20 regional events taking place in the U.K. alone to commemorate the day, including sports matches and parties. Some of the greatest people in history were/are left-handed, like Mother Teresa, Barack Obama, Walt Disney, Bill Gates, Charlie Chaplin, Mark Zuckerberg, and Albert Einstein, to name a few.

TRADITIONS OF THE DAY

Right-handers also take part in the day’s celebrations, just as much as left-handed people, and try their best to cater to the requirements of lefties. It’s the little things like purchasing scissors and kitchen items that are easier for lefties to use and making adjustments to handles and knobs that make life easier and increases convenience for left-handers.

Left-handers explain their needs and the difficulties they face to peers and educate them on the importance of creating items that serve them better. There are even some left-handed children who are bullied, so people are encouraged to recognize that being a leftie is a normal and natural occurrence. 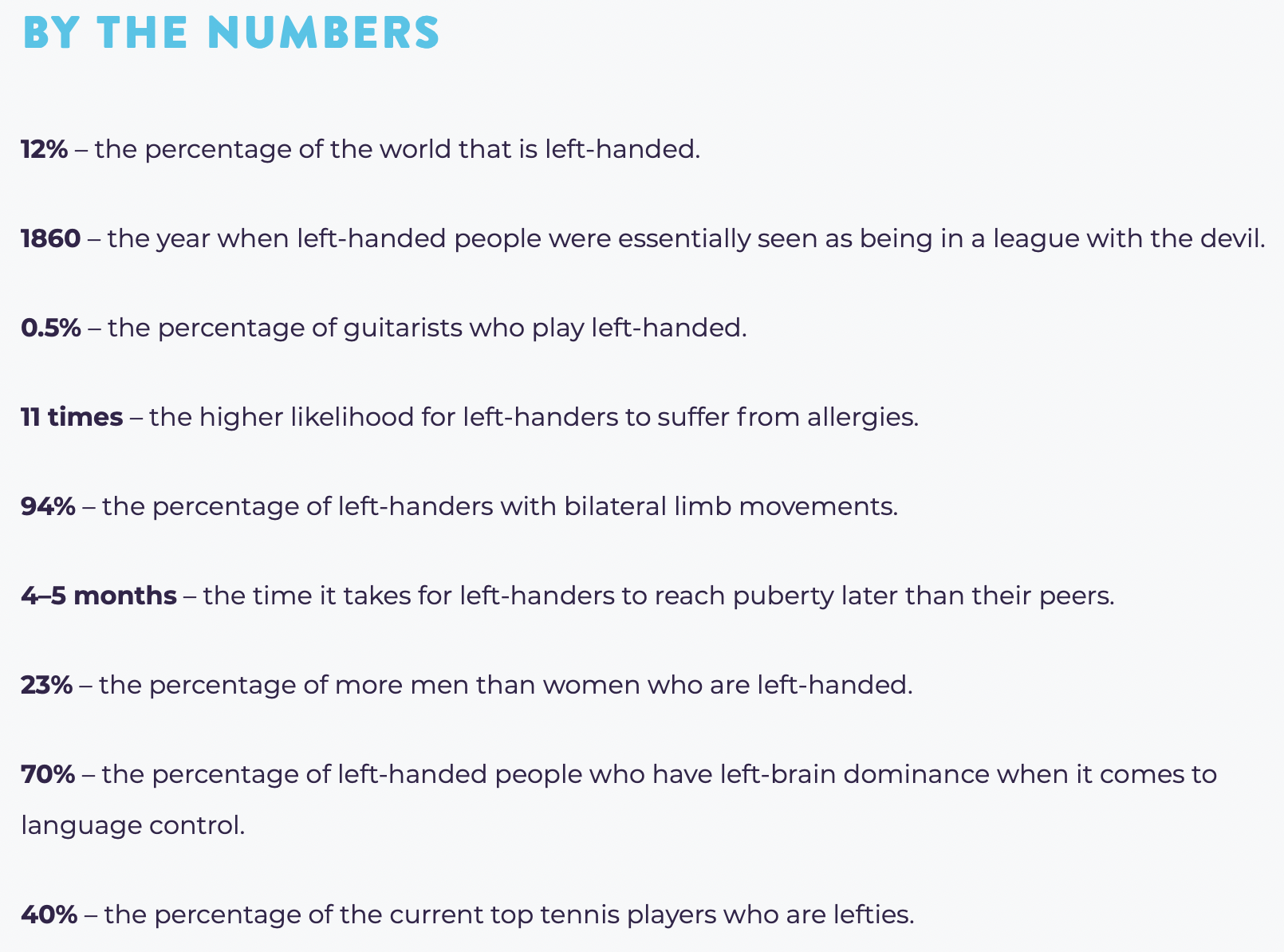 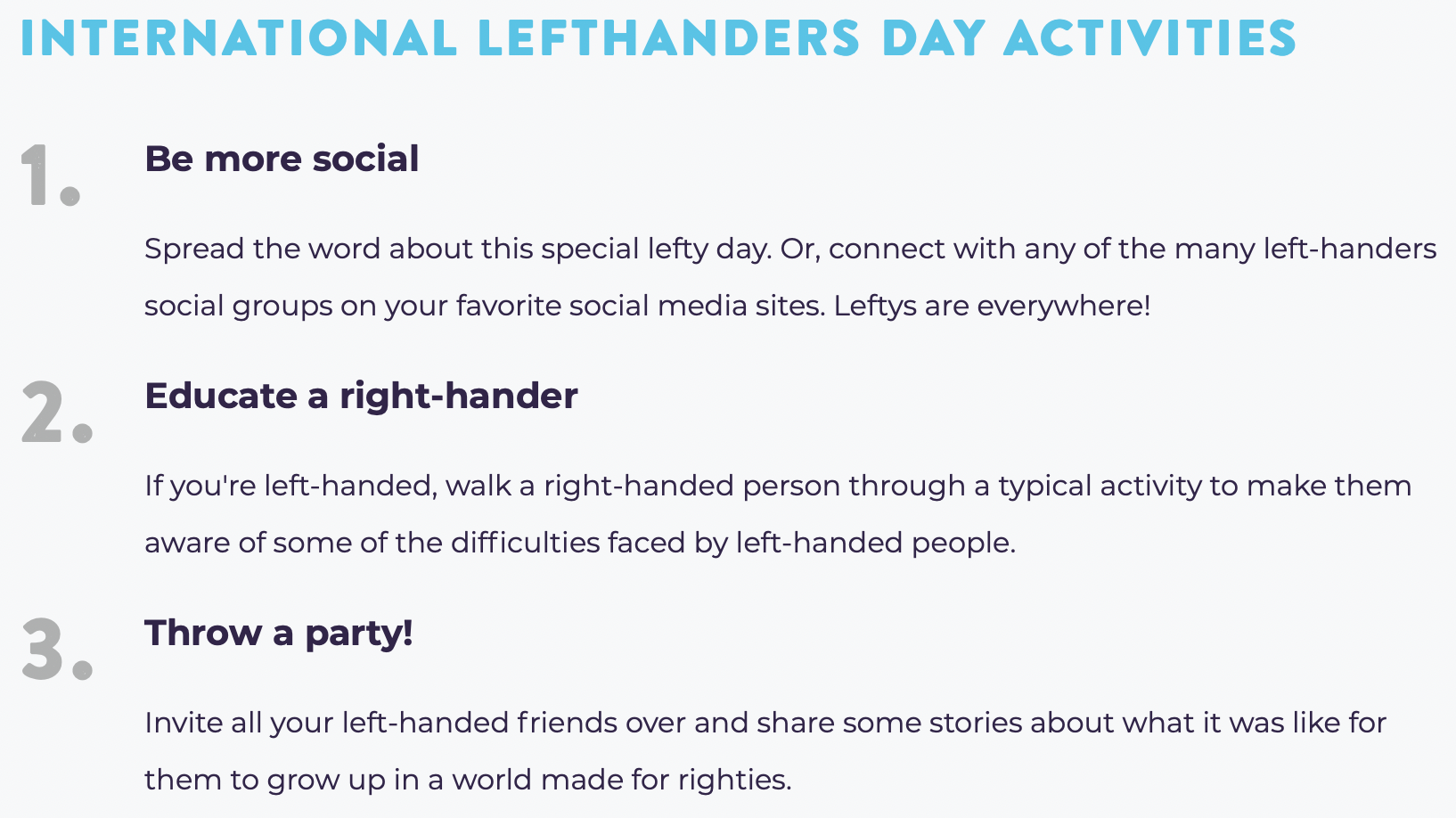