Travelers’ priorities have shifted heavily after more than a year spent in lockdowns, and fettered by both domestic and international travel restrictions.

The results of new research conducted by leading data and analytics company GlobalData suggest that people’s desire to reconnect, in person, with family and friends is potentially even greater than their pent-up longing for leisure getaways. Its findings suggest that ‘visiting friends and relatives’ (VFR) trips are destined to be a major driving force in the global travel industry’s recovery, and tourism providers should not underestimate their influence.

“GlobalData’s forecasts suggest that visiting friends and relatives (VFR) travel will experience higher growth, with a 17-percent compound annual growth rate (CAGR) between 2021-25, compared to leisure, growing at a 16.4-percent increase between the same time period,” said Johanna Bonhill-Smith, Travel & Tourism Analyst at GlobalData. “While VFR will not surpass the number of international leisure getaways, it will play a vital role in travel’s recovery, with 242 million international departures expected to be taken for this purpose by 2025.”

In 2019, VFR was the second-most typically taken travel type (46 percent) by global respondents, according to GlobalData’s Q3 2019 consumer survey—beaten out solely by ‘sun and beach getaways’ (58 percent).

While we might expect that, after spending 18 months hunkered down at home and tethered to the mundane, travelers would use their first opportunity to escape to the sea-and-sand destinations they’ve felt deprived of for so long. But, reuniting with friends and family whom travel restrictions may have kept them apart from is likely to be more of a priority for many people, GlobalData says.

The degree to which VFR dominates the travel landscape also depends upon the source market. In the U.S., 53 percent of travelers are making this type of trip their first priority. In Australia, 52 percent of respondents indicated the same, and the same figure came in at 49 percent in Canada, 64 percent in India and 60 percent in Saudi Arabia. 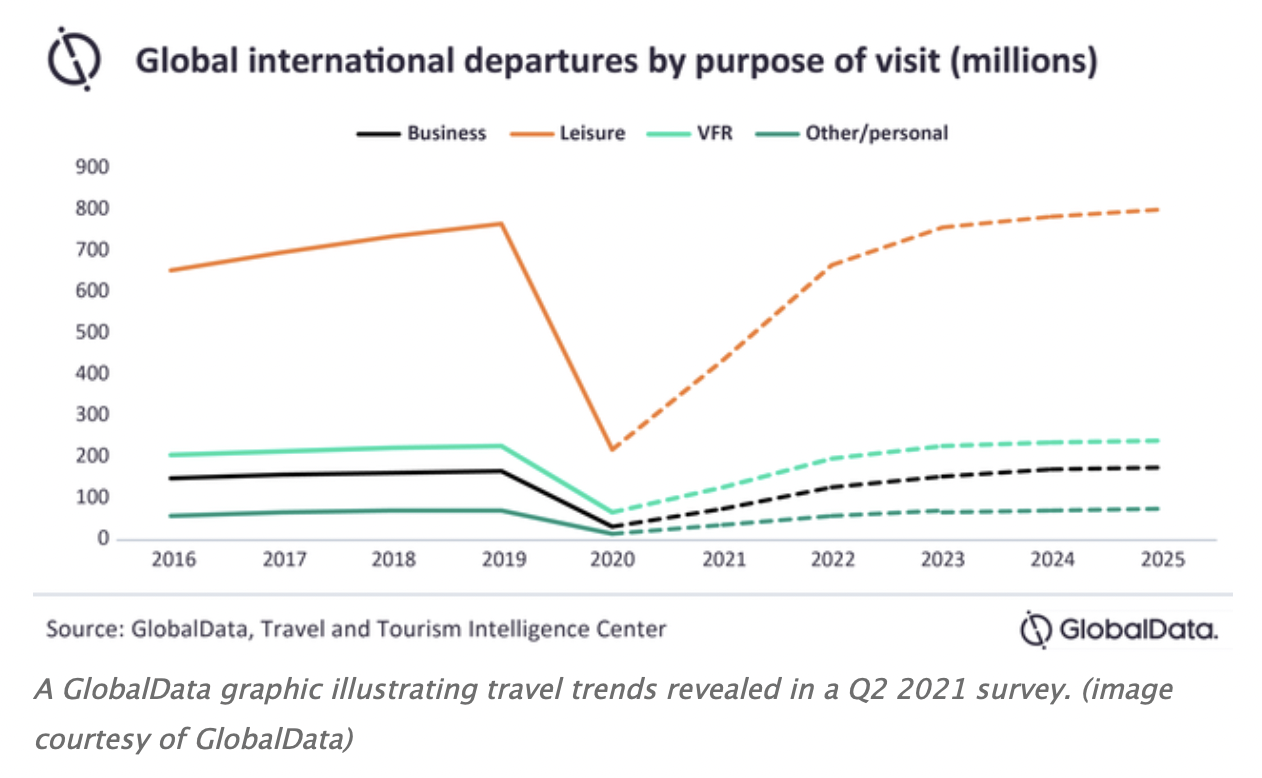 “A more recent GlobalData survey revealed that 83 percent of global respondents were ‘extremely’, ‘quite’, or ‘slightly’ concerned about restrictions on socializing with friends and family,” said Bonhill-Smith, referencing GlobalData’s Q2 2021 consumer survey. “Platforms such as Zoom, Facebook and WhatsApp have given consumers an opportunity to meet virtually, but this still isn’t quite the same as embracing a family member or properly sitting down together,” she added.

Its findings through this study led GlobalData to advise that worldwide destinations, tourism bodies and travel-related businesses looking to re-attract visitors should focus on helping to reunite loved ones. Bonhill-Smith offered some examples of how they might do so: “Destinations can issue special visas or requirements that will make it easier for families to reunite. Airlines can ensure popular VFR routes are some of the first to be restored, hospitality businesses and attraction operators could offer incentives and discounts for families. All industries across the travel sector could be better informed to have a greater understanding of this tourism market.”