David Ayer Blasts ‘Suicide Squad’: “The Studio Cut Is Not My Movie”

“I made something amazing … a handful of people have seen it,” the director writes in scathing open letter.

Suicide Squad director David Ayer is taking his criticism of the released version of his comic book film to a new level.

“I put my life into Suicide Squad,” Ayer wrote in a lengthy tweet titled “My Turn.” “I made something amazing. My cut is intricate and emotional journey with some bad people who are shit on and discarded (a theme that resonates in my soul). The studio cut is not my movie. Read that again. And my cut is not the 10 week director’s cut — it’s a fully mature edit by Lee Smith standing on the incredible work by John Gilroy. It’s all Steven Price’s brilliant score, with not a single radio song in the whole thing. It has traditional character arcs, amazing performances, a solid third-act resolution. A handful of people have seen it.”

That said, Ayer added, “I never told my side of the story and never will … I’m old school like that. So I kept my mouth shut and took the tsunami of sometimes shocking personal criticism.”

The director concluded by saying he is “so proud” of Gunn and “I support WB and am thrilled the franchise is getting the legs it needs … James’ brilliant work will be the miracles of miracles,” and that, “I will no longer speak publicly on the matter.” 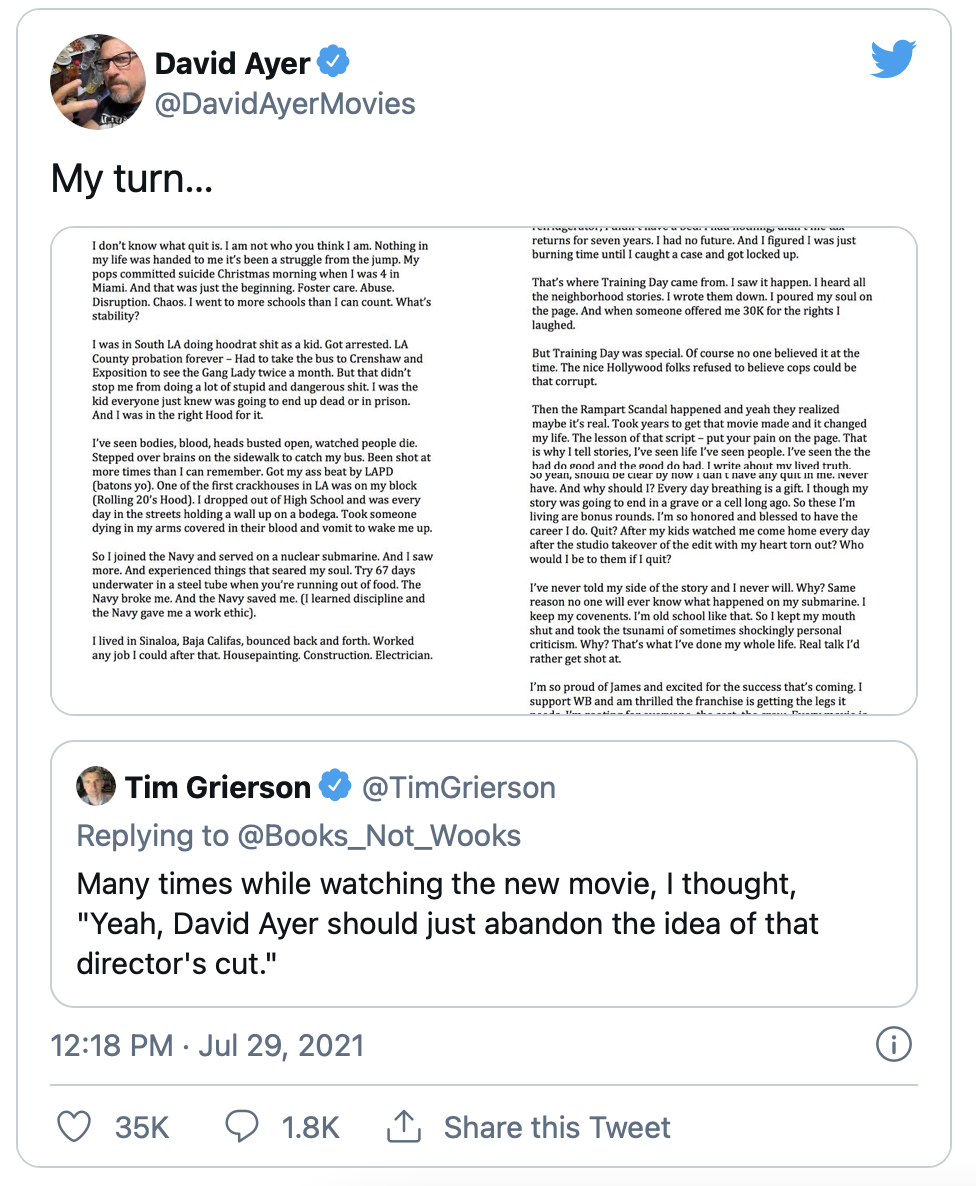 Before Suicide Squad‘s release, Warner Bros. took the unusual step of commissioning multiple cuts of the film by multiple editors. Gilroy was credited on the theatrical version. At the time, Warner Bros. issued a statement admitting the film had “a lot of experimentation and collaboration along the way” but said, “we are very proud of the result … this is a David Ayer film.”

Since then, Warner Bros. underwent an extensive regime change across 2019 and 2020 that included Ann Sarnoff being named CEO of WarnerMedia. In wake of Zack Snyder getting to release a director’s cut of Justice League in March, some have asked for an Ayer Cut of Suicide Squad. Yet the studio has shot down the idea, with Sarnoff telling Variety in March, “We won’t be developing David Ayer’s cut.” When the story was published, Ayer tweeted, “Why?”