National Cheesecake Day is the creamiest and yummiest holiday held on July 30 where America samples and indulges in some of the most delicious cheesecakes ever!

Separately, cheese and cake are beloved all over the world. But taken together, they attract a veritable cult following. Cheesecake is thought to have originated in ancient Greece, as evidenced by its earliest mention in Greek physician, Aegimus’, a book on the art of making cheesecakes. Since then, cheesecake has been passed down through the generations and entered into the fabric of numerous cultures.

Weirdly enough, the origins of the Cheesecakes are not known to us but it can be traced as early as back to ancient Greece. The recipe used back then only consisted of the most basic ingredients such as cheese, flour, and honey. Interestingly, cheesecake was fed to the greek athletes during the Olympics held back in 776 B.C. It was not until when the Romans conquered ancient Greece that eggs and proper baking methods were introduced.

As time went by, the recipe was modified several times to get that perfect ratio of smooth to creamy consistency, and this led us to the American cheesecake that we all know and love! In 1872, New York dairyman William Lawrence unintentionally came up with cream cheese while he was trying to replicate a French cheese called the Neufchatel. Talk about luck, right! Cream cheese became so popular and the demand for it became so high that it was packaged and distributed to all the local stores in the area.

Time went by, and an immigrant named Arnold Reuben from Germany, who lived in New York, was once served cheese pie at an event he attended. He was so fascinated and intrigued by the dessert, that he decided to experiment with the recipe until he came up with what we know today as the New York Cheesecake.

The popularity of the New York Cheesecake increased so much that different cities came up with their own versions, for example, the Chicago cheesecake, the Pennsylvanian cheesecake, etc. It became such an important part of American culture, that in 1985, it was decided that on July 30 every year National Cheesecake Day would be celebrated. 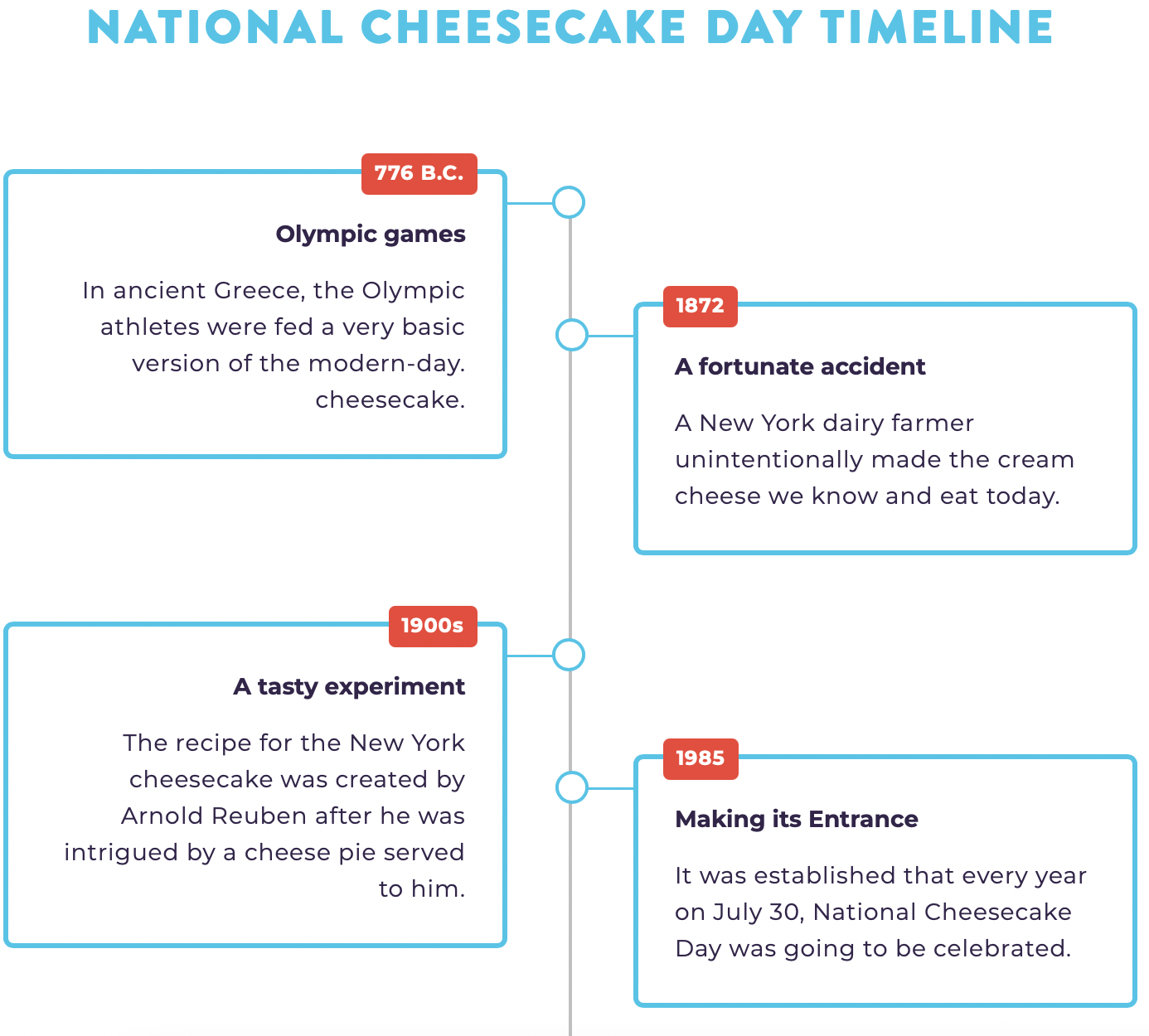 Around the world through cheesecake

Why get on a plane when you can travel the world through your mouth? Taste test regional variations of cheesecake by visiting your local Italian, Russian, German, Polish or French bakeries.

Indulge in the most famous cheesecake on earth

You can’t celebrate National Cheesecake Day without celebrating one of America’s proudest exports: New York-Style Cheesecake. Unlike other cheesecakes, New York-Style uses heavy cream, eggs and loads of rich, cream cheese. This cheesecake has a dense, smooth, velvety consistency. Chances are, when you think of cheesecake, you’re thinking of New York-Style.

Don’t be fooled by that rich, complex taste—cheesecake is actually super easy to make. Treat your friends and family (and yourself, of course) to a homemade cheesecake that’s fresh out of the oven. With an endless array of toppings, garnishes, spices and flavorings; your creation is sure to be one-of-a-kind.

Use #NationalCheeseCakeDay in social media.