Catholic officials on edge after reports of priests using Grindr

The reports hit the Roman Catholic Church in rapid succession: Analyses of cellphone data obtained by a conservative Catholic blog seemed to show priests at multiple levels of the Catholic hierarchy in both the United States and the Vatican using the gay hookup app Grindr.

The first report, published late last month, led to the resignation of Monsignor Jeffrey Burrill, the former general secretary of the U.S. bishops’ conference. The second, posted online days later, made claims about the use of Grindr by unnamed people in unspecified rectories in the Archdiocese of Newark, New Jersey. The third, published days after that, claimed that in 2018 at least 32 mobile devices emitted dating app data signals from within areas of Vatican City that are off limits to tourists.

The reports by the blog, The Pillar, have unnerved the leadership of the American Catholic Church and have introduced a potentially powerful new weapon into the culture war between supporters of Pope Francis and his conservative critics: cellphone data, which many users assume to be unavailable to the general public.

“When there is reporting out there that claims to expose activity like this in parishes around the country and also on Vatican grounds, that is a five-alarm fire for church officials, there is no doubt about it,” said John Gehring, the Catholic program director at Faith in Public Life, a progressive advocacy group.

The reports have put church officials in an awkward position: Priests take a vow of celibacy that is in no way flexible, and the downloading or use of dating apps by clergy members is inconsistent with that vow. But officials are also deeply uncomfortable with the use of cellphone data to publicly police priests’ behavior. Vatican officials said they met with representatives from the blog in June but would not publicly respond to its reports.

“If someone who has made promise of celibacy or a vow of chastity has a dating app on his or her phone, that is asking for trouble,” said Cardinal Joseph W. Tobin of Newark at a Zoom panel organized by Georgetown University. (He declined to be interviewed for this article.)

“I would also say that I think there are very questionable ethics around the collection of this data of people who allegedly may have broken their promises,” he said.

The reports have raised a host of questions: How did The Pillar obtain the cellphone data? How did it analyze the data, which is commercially available in an anonymous form, to identify individual app users? How widespread is the use of dating apps among Catholic priests, and how much has The Pillar been able to learn about specific individuals? 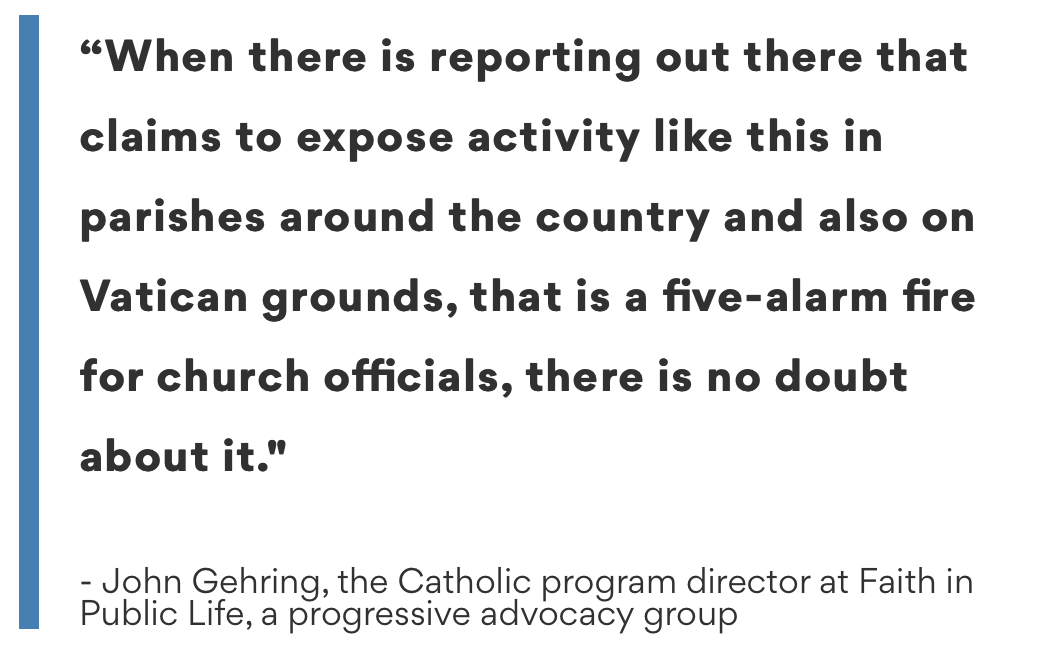 The editors of The Pillar, J.D. Flynn and Ed Condon, have refused to answer any of those questions and did not respond to a request seeking comment for this story. They have also declined interview requests from other news media.

In a podcast, Flynn and Condon said their work was motivated by a desire to expose a secretive culture of wrongdoing within the church.

“Immoral and illicit sexual behavior on the part of clerics who are bound to celibacy, but also on the part of other church leaders, could lead to a broad sense of tolerance for any number or kinds of sexual sins,” Flynn said on the podcast.

They said Newark was the only American diocese they wrote about because it was once led by former Cardinal Theodore McCarrick, who was defrocked in 2019 and charged last month with sexually assaulting a child in Massachusetts in 1974.

But their decision to investigate the use of a gay dating app in suburban New Jersey, instead of a city with a large gay population, has raised suspicion that their real goal may have been to undermine Tobin, an ally of Pope Francis.

Flynn and Condon’s former employer, the conservative Catholic News Agency, published a report the day before the first post on The Pillar that said it had been approached in 2018 by “a person concerned with reforming the Catholic clergy.”

That person offered them similar cellphone data and also provided specific information about a nationally prominent priest who was not Burrill, the executive editor of the agency, Alejandro Bermudez, said. He declined to name that priest.

At that time, Flynn and Condon were both editors at the agency, but Bermudez said he did not discuss the offer with them.

Bermudez said he thought the data was accurate but he ultimately declined to accept it because he thought it had been gathered in a “sketchy” way. He also said he thought using it to expose the private lives of priests would not be an effective or ethical way to reform the church.

The Pillar’s reports have been based on what it describes as “a very large data set” derived from data signals from multiple smartphone apps that were collected over two 26-week periods, one in 2018, and one in late 2019 and early 2020.

Until 2020, Grindr routinely provided user location data to freewheeling online ad exchanges, where it could be harvested by data brokers.

In January, Grindr was fined $11.7 million by the Norwegian Data Protection Authority for its history of providing user data, including precise locations, to advertising companies that later shared it with potentially more than 100 other entities.

In a statement, Grindr said it was trying to determine how The Pillar had acquired its user data. But it said those efforts were complicated by the writers’ “vague and incomplete descriptions of their work.”

“What is clear is that this work involved much more than just a small blog,” Grindr said in its statement.

The complexity and size of the data set makes it likely that The Pillar’s source had money and analytical skills, said Ashkan Soltani, a former technology adviser to the White House and the Federal Trade Commission.

Cellphone app data is often purchased from data brokers by corporations and political groups who analyze it to determine patterns of behavior. They can also use location filters to find users of a certain app in a certain location, like Grindr users within the compact borders of Vatican City.

Some firms specialize in de-anonymizing cellphone data, and a user’s identity can sometimes be determined by following their movements, Soltani said. That may be how The Pillar identified Burrill, who the blog said it tracked to his home and office as well as to gay bars and a bathhouse.

“This is a cottage industry, and all of this stuff is really available out there,” Soltani said. “There is a risk for anyone who uses these apps. This could potentially happen to anyone.”

The reports have set the Catholic Church on edge.

Matteo Bruni, a Vatican spokesperson, said that Vatican officials, including the powerful secretary of state, Cardinal Pietro Parolin, met with “representatives from The Pillar” on June 17.

But he said the Vatican had decided not to respond to the report and did not say whether it planned to investigate the claims. It is unclear how church officials might punish the use of a cellphone app, if The Pillar’s reports were to be confirmed.

In Newark, church officials instructed priests not to speak to journalists. Several who spoke, on condition of anonymity, expressed dismay at the use of cellphone data to track priests. Even lay leaders were reluctant to discuss the controversy on the record, although not many parishioners appear to be aware of it.

The Pillar has not said whether it plans to publish more reports using cellphone data, but priests in other dioceses have waited anxiously to see whether it would publish anything about their communities.

Father Bob Bonnot, executive director of the Association of U.S. Catholic Priests, said the use of cellphone data to track the movement of Burrill had deepened a sense of vulnerability many priests feel.

“It can be terribly threatening,” he said. “It can make all priests uncomfortable and worried.”