Disney+ and Netflix’s Next Challenge: Shaking Off Slower Streaming Growth

Amid reopenings, the same signs that are making movie theater owners optimistic for this summer are spelling concern for digital executives as major platforms miss subscriber expectations.

A funny thing happened in the first half of 2021: The insatiable appetite of consumers for streaming video content began to slow down.

“We had those 10 years where we were growing smooth as silk, and then it just got a little wobbly,” said Netflix co-CEO Reed Hastings in an April 20 video for the company’s first-quarter earnings after the company missed its own modest subscriber estimates.

And it wasn’t just Netflix. Disney+ also missed Wall Street expectations, delivering 103.6 million subscribers at the end of the last quarter, well below the 110 million that had been anticipated. Given the explosive growth of Disney+, and the reliable, steady growth of Netflix, the misses drew consternation from analysts and executives, who posited three pandemic-driven theories for the slowdown: the subscriber pull-forward, the content squeeze, and the reopening.

The pull-forward suggests that while the COVID-19 pandemic accelerated streaming trends — to the benefit of Netflix and Disney+ in 2020 — it is now coming back to bite them. Consumers who may have been on the fence about subscribing were enticed to buy in as lockdowns were put in place last year.

“It really boils down to COVID, frankly,” said Netflix CFO Spencer Neumann in the company’s earnings video. “We had this huge pull-forward in 2020 in terms of our subscriber additions, nearly 40 million paid net adds in 2020.” That left a smaller pool of potential customers this year.

“With 95 million Disney+ net adds in its first five quarters, momentum was bound to decelerate at some point,” wrote Wells Fargo analyst Steven Cahall in a report May 14. 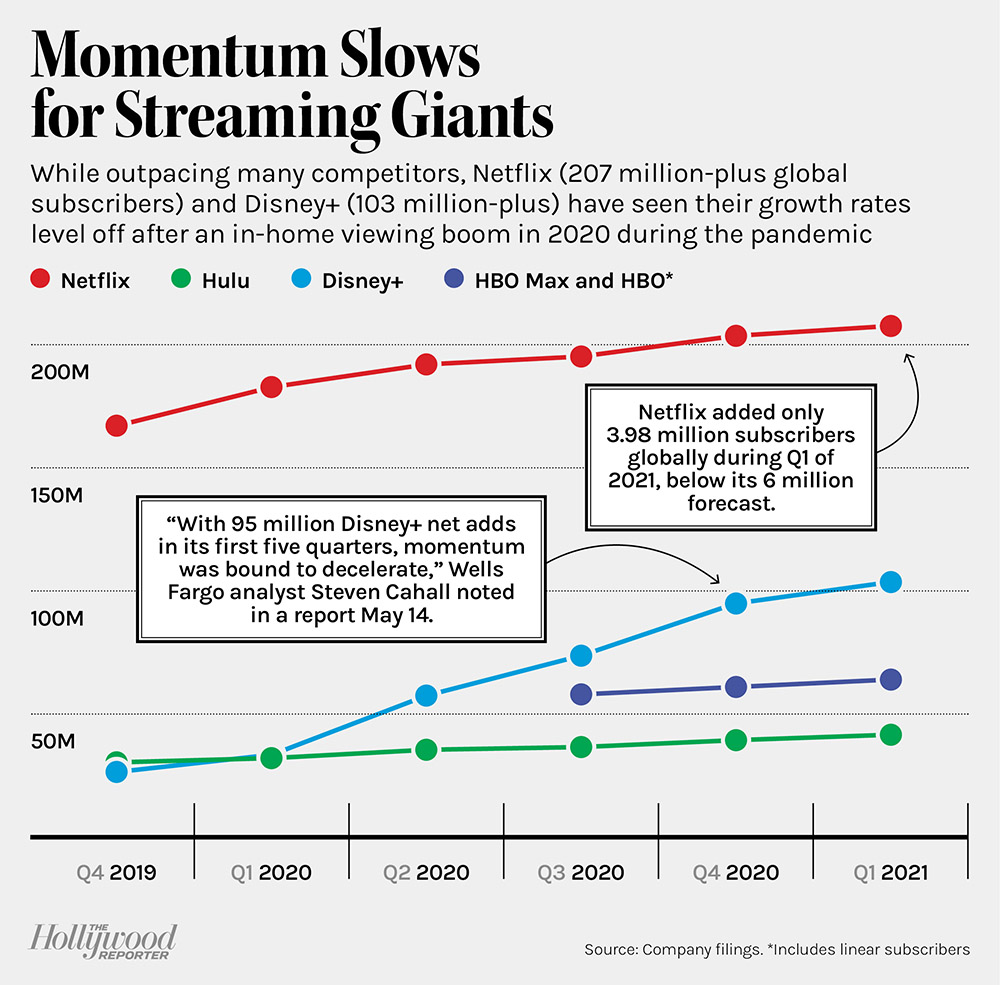 In the case of the re-opening, the same signs that are making movie theater owners optimistic for this summer are spelling concern for streaming executives. With the content squeeze, the industry faced its own version of the chip shortage that is hurting the auto industry, or the lumber shortage that jacked up the price of home renovations and film and TV set materials.

But instead of a physical commodity in short supply, it was new programming. “A lot of the projects we had hoped to come out earlier did get pushed because of the postproduction delays and the COVID delays in production,” Hastings said.

Executives are betting that fresh, original, must-see content will be their ticket back to reliable subscriber growth. And with production back in full swing, there is an expectation that the latter half of the year could mark a return of something closer to normal, with a “clear catalyst to a reacceleration of growth toward that backend of the year,” said Netflix co-CEO Ted Sarandos.

“Content has been sort of stymied in the supply chain because of the shutdown of production,” said Disney CEO Bob Chapek at a JPMorgan conference May 24. “Now that we’re pretty much up to full production, we expect to have full content flow by FY2022 or FY2023, when we’re really in the kind of cadence that we want to have going forward.”

Multiple streaming services are also trying to chart a path to growth with strategies that may deliver raw subscriber numbers in the near term, but risk delivering lower average revenue per user (ARPU). Paramount+ and HBO Max are betting that less expensive ad-supported tiers can bring in subscribers that may be feeling the pinch of having too many premium video options. HBO Max With Ads launched June 4 at $9.99 per month, a $5 discount. Paramount+, meanwhile, lowered the price of its ad-backed tier by $1 to $4.99 per month.

“Ad-supported streaming is now foundational,” says Andre Swanston, CEO of the TransUnion-owned streaming data and measurement firm Tru Optik. “I think it was almost a business imperative. My biggest surprise is that Netflix still hasn’t pivoted to do the same.”

“It goes to the heart of the value exchange question,” adds Eric John, vp of the Interactive Advertising Bureau’s Media Center. “If you talk to the folks at Hulu, they would tell you that growth has always continued to be in the ad-supported, less expensive tier.”

Indeed, the goal is, in the words of WarnerMedia CEO Jason Kilar, to be “economically indifferent” as to which tier consumers buy. According to Disney’s second quarter financial report, thanks to advertising, the average Hulu subscriber brought in just over $12 per month in revenue, despite most subscribers paying for the $5.99 ad-supported tier.

There is also another strategy being adopted to drive subscriber growth: international expansion. The problem: Streaming services are learning that the markets that juice subscriber counts don’t deliver the revenue that the U.S. and Europe do. This month HBO Max launched in some 39 territories across Latin America. The price? Three dollars to $6 per month. “If we want to reach the 100 million households, the first thing we have to do is to ask how much these homes can pay,” said HBO Max Latin America GM Luis Duran at a launch event that was streamed.

WarnerMedia took its lead from Netflix and Disney+, which have added tens of millions of international subscribers by offering less expensive plans around the world.

But that growth comes at a price. In its last quarterly earnings report, Disney noted that the ARPU for Disney+ fell by 30 percent, because the price for Disney+ Hotstar in India and Southeast Asia “is significantly lower” than in other markets. Netflix, too, reports that its revenue per user in the Asia-Pacific and Latin America regions is about 30 percent lower than in North America and Europe.

Disney is also plotting a growth strategy of its own, one that Netflix, ViacomCBS and WarnerMedia can’t replicate: Bringing together what Chapek calls “our original direct-to-consumer business,” Disney’s theme parks, and Disney+. “We’ve got a tremendous amount of information on our consumers from our Parks business. What would happen if we married that, and actually mined that data to help people subscribe to Disney+ knowing what we know?”

But the efforts by all may be worthwhile: There is a first-mover advantage in streaming, as Netflix proved in the U.S. Once dominant, the price can rise.

As Disney+ and Netflix seek to return to subscriber growth, and as Paramount+, HBO Max, and others try to carve off large pieces of the pie for themselves, the second half of 2021 feels like it could mark a decisive moment in the streaming wars as everyone fights for subscribers.

“This is a foot race right now for who builds the kind of scale on the new generation of distribution of media,” AT&T CEO John Stankey said at a Discovery Inc. employee town hall May 19. “I don’t think this window is open for very long.”