It’s been a mixed bag recently for Jeep Grand Cherokee aficionados. A new three-row Grand Cherokee L debuted for the 2021 model year to much fanfare, but the GC’s two-row fourth-generation variant has soldiered on unchanged, despite being on the market for 11 long years. A redesigned two-row Grand Cherokee has been eagerly anticipated, and our initial experience with the 2022 model tells us that the patience of its fan base will be rewarded—if they’re willing to pay for more than a decade’s worth of catch-up.

The new standard two-row Grand Cherokee is some 11.4 inches shorter than its three-row L counterpart. More to the point, it’s 3.7 inches longer, an inch wider, and has a lower roofline than the outgoing model. It rides on a 116.7-inch wheelbase that’s exactly two inches longer than before, and the track width is up 1.4 inches. The result is a subtle swelling that’s almost undetectable because its proportions remain pure Grand Cherokee. There’s a certain fireplug stoutness to its shape, with its straight character lines, tented greenhouse, trapezoidal wheel arches, and a tapered D-pillar that tips forward a bit more than the boxier three-row L’s. This time out the hood is a bit longer, and the nose and requisite seven-slot grille are canted slightly forward, à la Jeep J-series. Consider yourself forgiven if you didn’t notice that the side glass extends nearly a half inch lower, improving visibility. 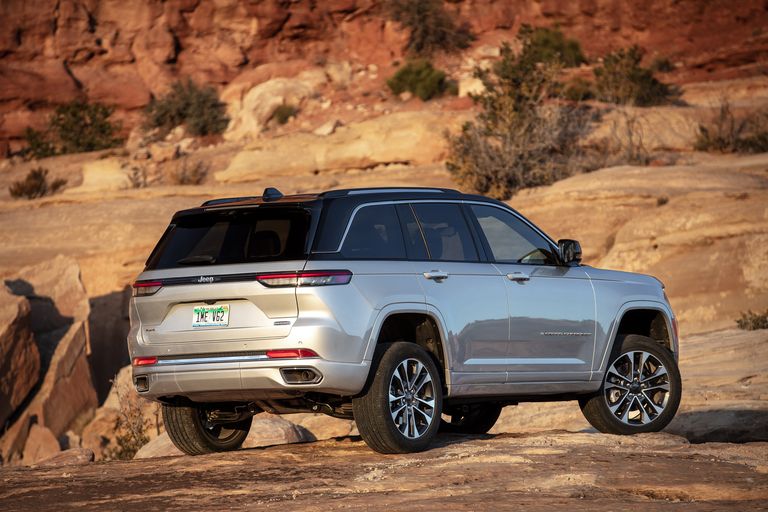 Despite its growth, Jeep says the new Grand Cherokee weighs about 250 pounds less than before. You can’t point to just one change to explain this, as it derives from numerous advancements. The unibody structure now contains more high-strength steel, there’s more aluminum in the upper body, and the rear liftgate is made from a combination of aluminum and composite materials. The front subframe cradle is now made of aluminum, as are nearly all of the front and rear suspension pieces. The front axle shafts on four-wheel-drive models are hollow, and they run through the oil pan so the engine can sit about 1.5 inches lower.

The available engines—a standard 293-hp 3.6-liter V-6 and an optional 357-hp 5.7-liter V-8—largely carry over. Both remain paired with an eight-speed automatic transmission, though minor tweaks have added 1 mpg to the EPA combined estimate for V-6 models, now to 22 mpg. V-8 models continue to carry a federal combined score of 17 mpg yet gain a shorter final-drive ratio that helps them get off the line a little better than before. Maximum towing capacities remain unchanged at 6200 pounds for the V-6 and 7200 pounds for the V-8. 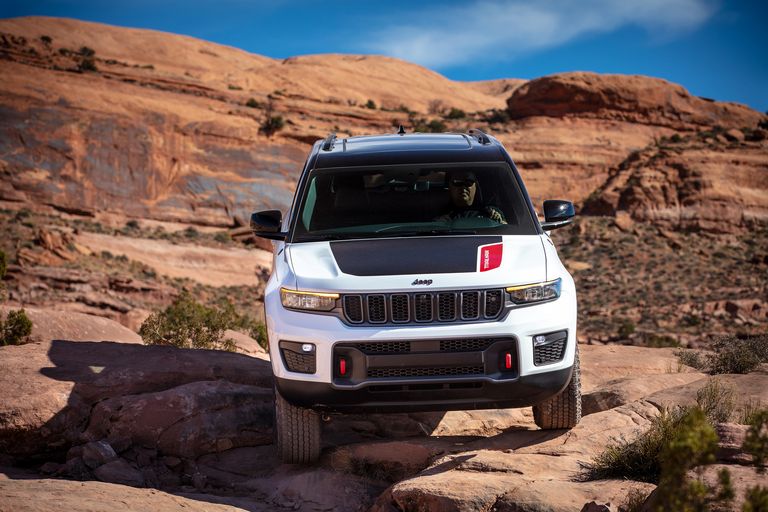 Less weight and an engine mounted lower in the chassis can aid handling, but the new Grand Cherokee also employs revised multilink front and rear suspension, which contribute to its pleasantly direct steering, steady cornering attitude, and its ability to soak up bumps like never before. The vehicles we drove were fitted with optional air springs and adaptive dampers, a combination that delivered impressive composure and admirable isolation over neglected asphalt, even when riding on the Summit Reserve model’s 21-inch wheels. We also sampled a more rugged Overland model with 18-inch wheels on gnarled dirt roads and came away equally impressed.

As before, the Trailhawk model is the real off-road star of the lineup. It starts with standard air springs, which can now deliver 11.3 inches of ground clearance in their highest setting, plus a reshaped front fascia that helps boost the approach angle from a previous 30 degrees to 36. Breakover and departure angles also have been improved, while an electronically disconnecting front anti-roll bar translates to more than five additional inches of suspension droop in frame-twisting situations, as well as considerably less head toss when traversing uneven terrain. The Trailhawk also comes with the top Quadra-Drive II four-wheel-drive system, which combines the lesser Quadra-Trac II system’s two-speed transfer case and 2.72:1 low-range gearing with a limited-slip differential. Add in 18-inch Goodyear Wrangler Territory AT tires, a forward-looking off-road camera that can peek over crests, and an automatic crawl control system, and you’ve got a great turnkey off-road SUV that’s still impressively civilized on asphalt. 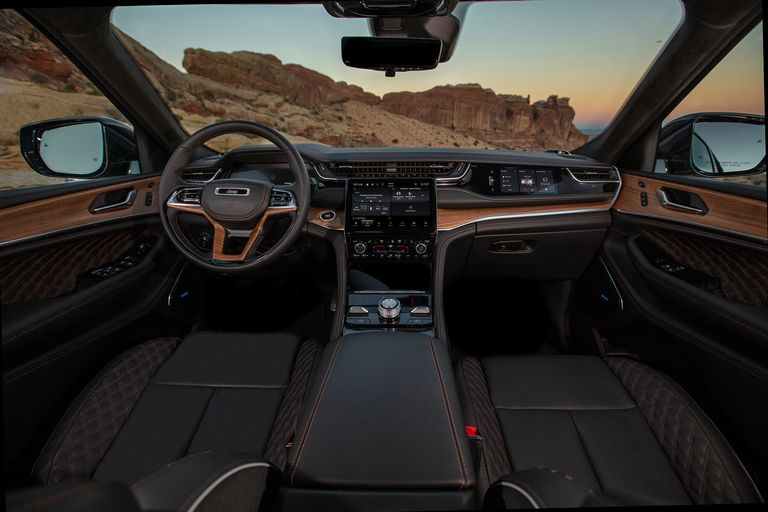 Most people will never push their Grand Cherokees to the max off-road, but occupants will be massively impressed with the new model’s refined interior design and upgraded materials. Standard equipment across all trim levels includes dual-zone automatic climate control, a 10.3-inch digital gauge cluster, and a meaty tilt-and-telescope steering wheel that simply feels good in the hands. Rear-seat legroom is solid and a smidge better than before, but those seeking cavernous interior appointments likely are already eyeballing the three-row L model.

Techwise, the GC has come a long way. A responsive Uconnect 5 infotainment system is standard and features wireless Apple CarPlay and Android connectivity. An 8.5-inch touchscreen is included on most trims, with a 10.1-inch setup available on Limited trims and above. An interactive front-passenger display also is available in the Trailhawk on up, and it’s angled away from the driver so the passenger can watch movies via Amazon Fire accounts without distracting the pilot. The person riding shotgun also can play DJ, seek out map destinations and port them to the main display, or see what the kids are watching on the optional Fire TV–enabled back-seat screens. Meanwhile, the driver can gaze out through the optional head-up display while sampling the optional 950-watt, 19-speaker McIntosh audio system. In the background, all Grand Cherokees come with adaptive cruise control, automated emergency braking, lane-keeping assistance, blind-spot monitoring, rear cross-path detection, rear park-assist sensors, and more. 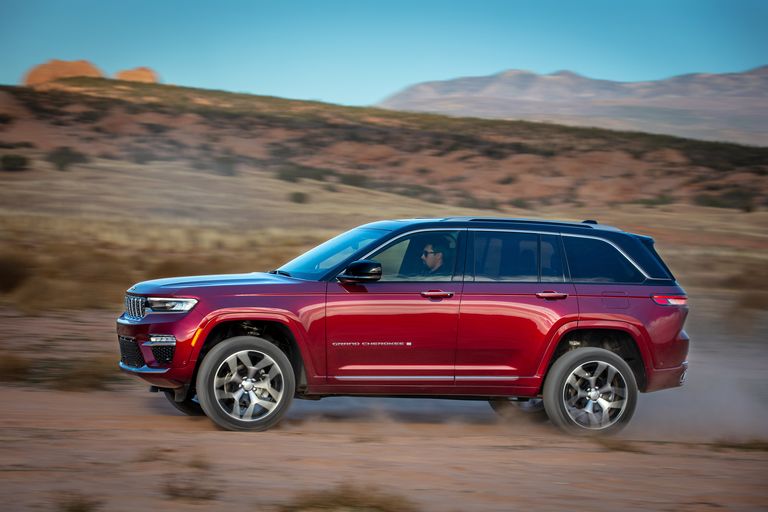 Production is set to kick off in late November, with some trickling into dealerships before the end of the year. Technically, there are five trim levels: Laredo, Limited, Trailhawk, Overland, and Summit. You may see mention of the Altitude trim, but it’s actually a $4555 package on the Laredo. Likewise, the Summit Reserve is really a $4000 option bundle atop the regular Summit. Pricing for rear-drive models starts at $39,185 for the Laredo and extends to $59,160 for the Summit. Four-wheel drive is an additional $2000 on anything but the Trailhawk, where it’s standard, and the V-8 adds another $3295 to the Trailhawk, Overland, and Summit. There will be a 4xe plug-in hybrid powertrain in the near future, but its pricing hasn’t been finalized. For now, the top of the heap is the four-wheel-drive Summit Reserve with the V-8 at $68,455 to start. What this boils down to is roughly a $3000 increase for most models compared to the outgoing versions—except for Trailhawk and Overland, which are up by $5000 or so.

That increase probably doesn’t matter, though. The latest Ram 1500 and Jeep Wrangler brought upcharges when they debuted, yet their overall success has shown that customers are apt to gloss over price hikes if there also are meaningful upticks in interior quality and feature content. The new Grand Cherokee brings all that and more, including significant improvements to its chassis. Jeep’s iconic luxury SUV doesn’t just look like it costs more, it drives like it too. 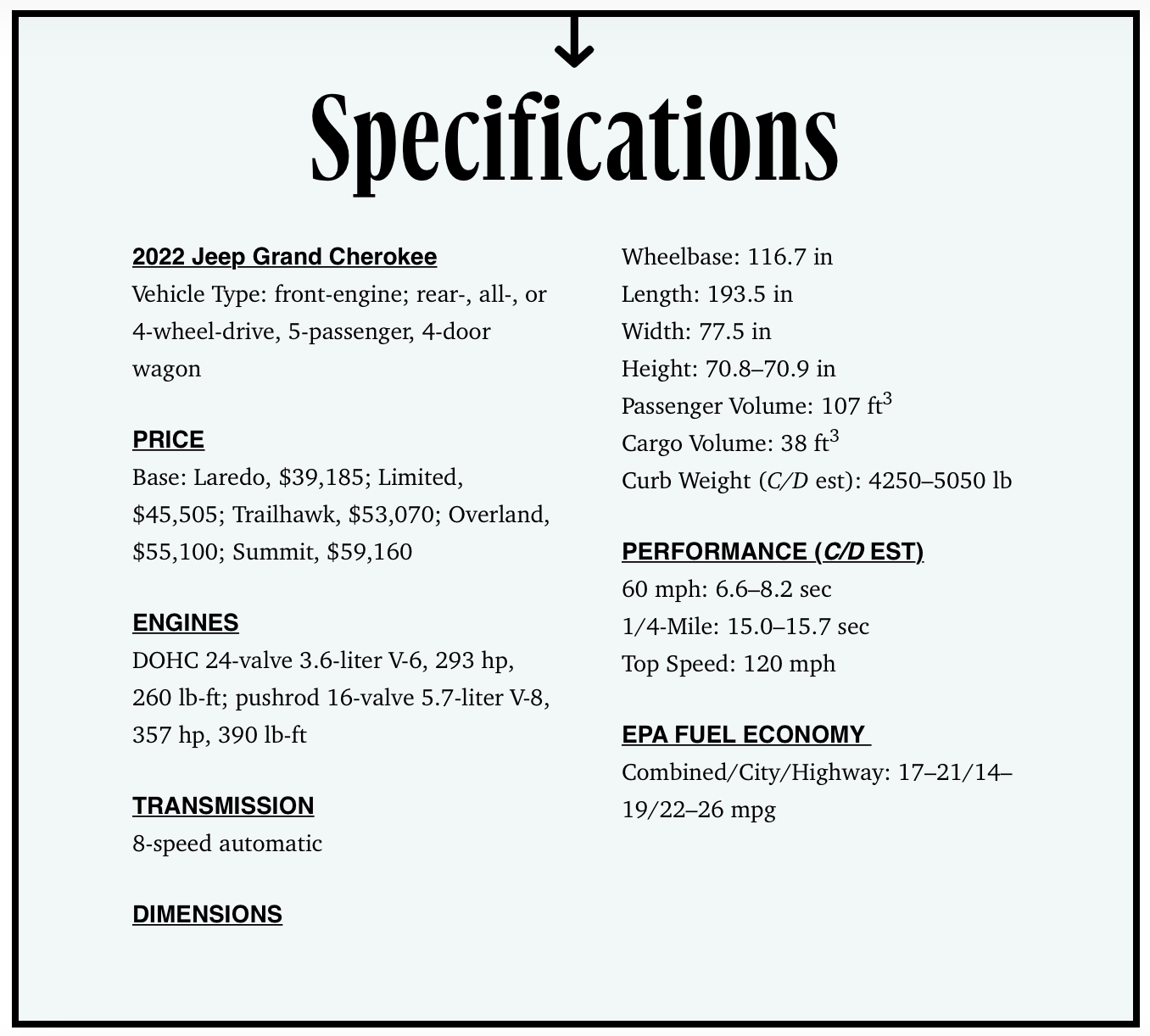