North Carolina’s storied state fruit will sting your lips and sweeten your soul.

For two centuries, tobacco was king in the Carolinas. Alongside textiles, it ruled the agricultural industry, but as the production of these items slowly moved overseas or was reduced significantly, growing fields lay bare. New industry rose and the big-little grape that could, did. Scuppernong is a funny word to say, and it comes with a fun and varied history. Every state in the union has a vineyard or a winery, but only six species of grapes are indigenous to North America and the muscadine is one of them. That’s where we get scuppernongs.

The name “scuppernong” is rooted to the Algonquian word “askuponong” meaning “the place of the sweet bay tree,” and it’s shared with the Scuppernong River that winds through Tyrrell and Washington counties to empty into the Albemarle Sound in coastal North Carolina. A scuppernong’s skin is mottled with spots of brown, with varying shades of hazel to light green, like a white grape. This skin is thick and bitter, but if you bite the stem end, it splits and easily comes off the pulp inside. Juice from scuppernongs is cloyingly sweet, sweeter than the sweetest sweet tea and not unlike liquid candy. Even after fermentation and bottling, the brix level is still so high, I believe it really is just grape juice for adults.

In season from late July to October, scuppernongs can be found in the southeastern U.S., but North Carolina is their true home. The scuppernong was the first grape cultivated in the United States and is the official fruit of North Carolina — so tied to the region’s identity that it’s part of the official state toast. 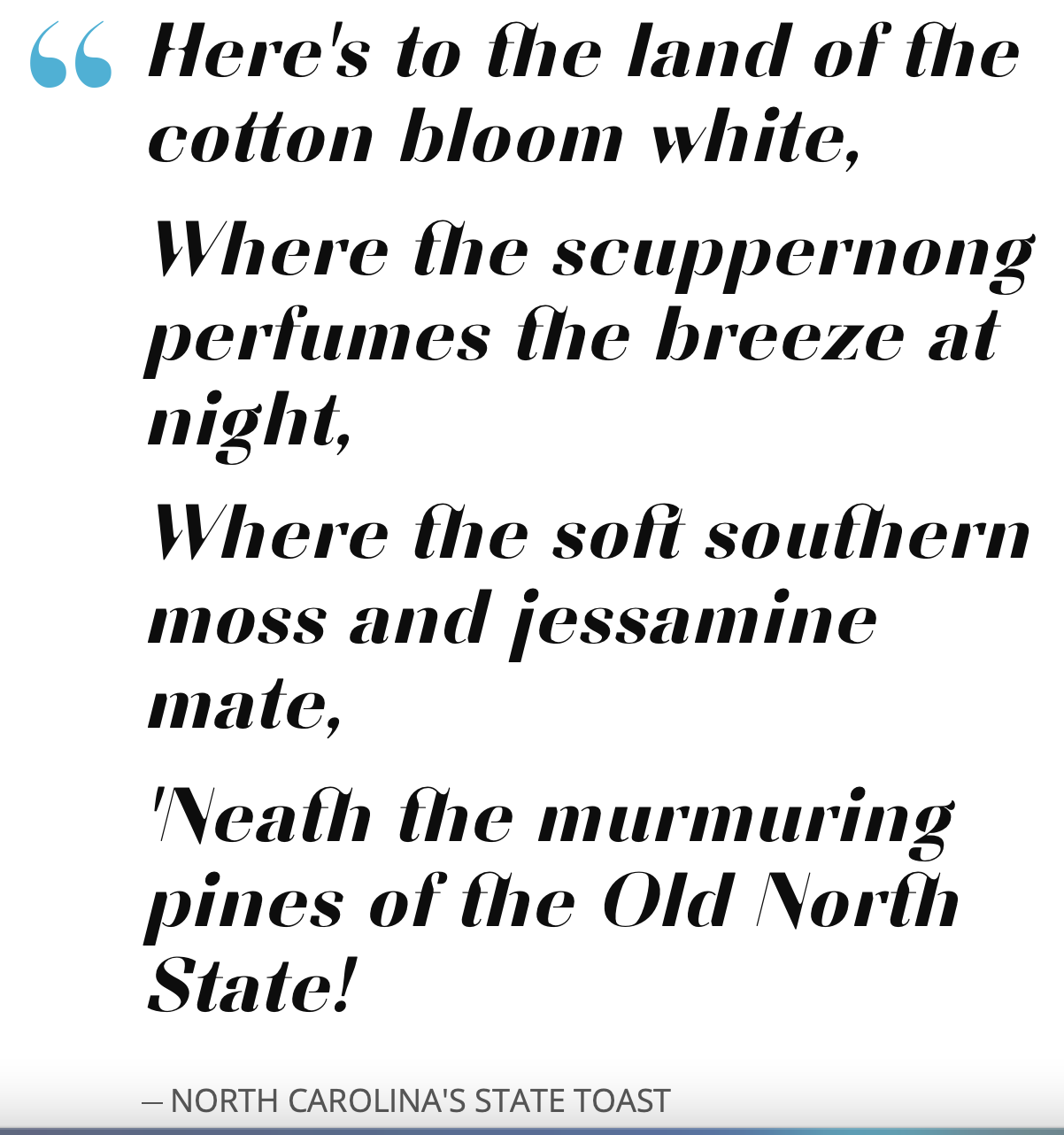 The 400-plus-years-old scuppernong Mother Vine lives in Manteo on Roanoke Island and is the oldest known cultivated grape vine in the country, and one of the oldest in the world. This is the vine from which all scuppernongs originally come. Part folklore and part history, it’s said that this vine was one that Sir Walter Raleigh’s first expedition to the New World encountered. On a reconnaissance of the North American coast from their native England in 1584, his servants Captain Philip Amadas and Master Arthur Barlowe wrote that the land was “so full of grapes as the very beating and surge of the seas overflowed them.”

The progeny of this vine live on in every scuppernong ever consumed, will be consumed or used in agricultural products. The most senior winery in North Carolina, Duplin, is only 46 years old but it leads the state in production of muscadine and scuppernong-based wine.

All scuppernongs are muscadines but not all muscadines are scuppernongs. The muscadine is actually a native American grape, Vitis rotundifolia, and scuppernongs are a variety of muscadine. The loamy sand and saltwater of the coastal plains region — which is responsible for keeping the mother vine looking youthful — is no match for this hearty fruit. Every corner of the Tar Heel state is an ode to the scuppernong. Immortalized in the form of jams, jellies, fruit butter, pies, juice, wine, and even in an independent bookstore named for the grape located in Greensboro, the state loves this hearty, tough grape.

The grapes themselves look otherworldly with their thick skins, bringing to mind the way lizards and amphibians have been able to survive for centuries. After you get through the vegetal exoskeleton, the grape looks similar to the aqueous humour of an eyeball. Large, bitter seeds rest inside.

The juice of a scuppernong is very sweet but the skins are acidic and will destroy your taste buds and your skin, if you let them. My grandmother would coat her lips and chin with petroleum jelly before embarking on a snack of muscadines, still warm from the garden sun. I remember watching her tuck her jeans into her Naturalizers designated for yard work, walking behind a gas-powered tiller in our backyard garden. With a wide-brimmed straw hat on her head and a long-sleeved buttoned-down shirt with the sleeves rolled up halfway her forearms, she’d be out in the blistering sun tending garden and futzing with the scuppernongs growing on the backside of the garden near the edge of our property line. The vines twisted and curled around stakes fashioned from old wooden broomstick handles, metal bed rails and store-bought metal rods for the purpose of gardening. Disposable pie tins affixed to the tops of the stakes with twine would shine and bounce in the breeze to keep away the birds and other small creatures looking for a snack.

We couldn’t eat or give away the grapes fast enough, so to use up the season’s bounty, my grandma would make scuppernong wine. Special guests of drinking age would be offered a sip or two of wine after dinner. It was very potent; I could smell it from across the room. Honored guests and family members were allowed to take small jars home as parting gifts. More often than not, the grapes intended for wine would turn into vinegar. That vinegar would be used to dress collard greens or be poured down the drain in the kitchen sink in order to try again. My grandmother would keep glass decanters and jars of it on top of our china cabinet in the dining room. Once I got brave and took a step stool to try to get up high enough to grab a bottle to taste it. The fear of getting in trouble outweighed my curiosity, so I never tried it.

My experience with the fruit lies in the memories of running my hands over the twisted vines and watching the baskets of grapes bounce on my grandmother’s hip as she walked to the house from the garden. As a young adult, I eschewed the ancient grape for more thin-skinned, sleek and seedless varietals that required less work to eat and frankly, didn’t require an ablution ritual before snack time. Now that I’m older, I revel in the evocation of my scuppernong history. I seek out the wine, dress up the juice in cooking with gastriques and beurre blancs. I have not upgraded to home winemaking status, but that day is coming soon. The grapes will persist until I am ready.