2022 Infiniti QX60 Is Redesigned with Family Luxury in Mind

Exterior and interior redesigns bring the 2022 QX60 back in fashion and make for a useful family hauler.

Infiniti has been teasing out the launch of the redesigned 2022 QX60 for more than six months with peeks at a fashionable leather interior, promises of a geared transmission to replace the CVT, and an elegant concept build—the QX60 Monograph—that made it clear the incoming QX60 would be wider and more imposing than the outgoing model. The tease continues, as we still haven’t driven Infiniti’s mid-size family hauler, but now that we’ve seen it in the sheetmetal, we can report that fans of the previous QX60 will find the new version more comfortable and more stylish, with lots of clever details, both aesthetic and useful. 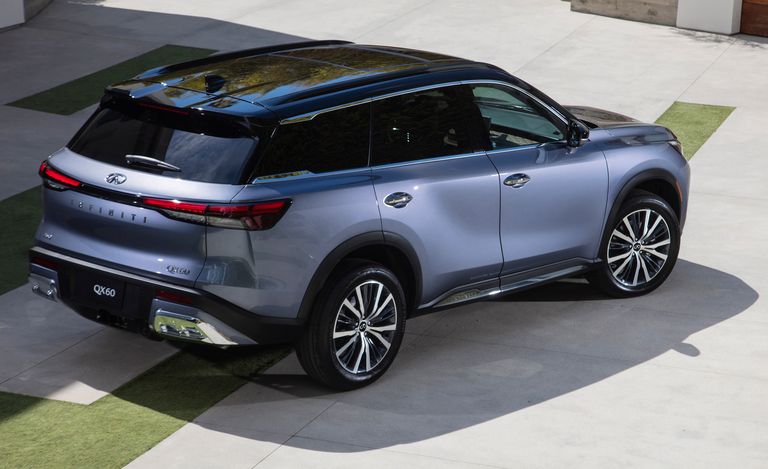 If you liked the tall, square looks of the Monograph and its floating two-tone roof, you’re in luck, because the high fenders, large grille, slim lights, and blacked-out roof supports all make an appearance in the 2022 QX60, even though only the top Autograph trim will get the two-tone paint.

The exterior rewards an attentive walkaround. There are some neat little details, from the twists in the grille to the hatched silver trim plate inside the headlights. The production QX60 doesn’t get the flush door handles of the concept, but it does have the taillights with individual LEDs in a thin band that give the back of the SUV the look of a quickly departing spaceship. The only misstep we see in the exterior is the chrome faux exhaust tips at the bottom of the rear fascia. They don’t do anything, and why are they so shiny? Ah well, subjective.

What isn’t subjective is that the 2022 QX60 doesn’t just look like it has a more aggressive stance; it’s measurable. The tires, 255/50-20 Bridgestones, are wider by 0.8 inch than before. The QX60’s track width measures 66.9 inches, 1.2 inches wider, and the overall height also gains 1.1 inches while losing 1.4 inches in length, resulting in a broad-shouldered machine that will still fit in a small garage.

Under the big hood is the same naturally aspirated 3.5-liter V-6 from the previous QX60, making 295 horsepower. Only now, instead of a continuously variable automatic transmission (CVT), it’s backed by a nine-speed automatic transmission. Tim Franklin, director of product planning for Infiniti Americas, says the move to a geared transmission reflects customer feedback, but also Infiniti’s goals of reaching a broader audience with the new QX60. “It’s a luxury vehicle, and people expect certain things,” he said, adding that the change also means that a properly equipped AWD QX60 is now rated to tow up to 6000 pounds, an increase of 1000 pounds over the last version. The QX60 is still built on a front-wheel-drive platform, but all-wheel drive that can automatically send up to half the power to the rear wheels will be available on every trim level. 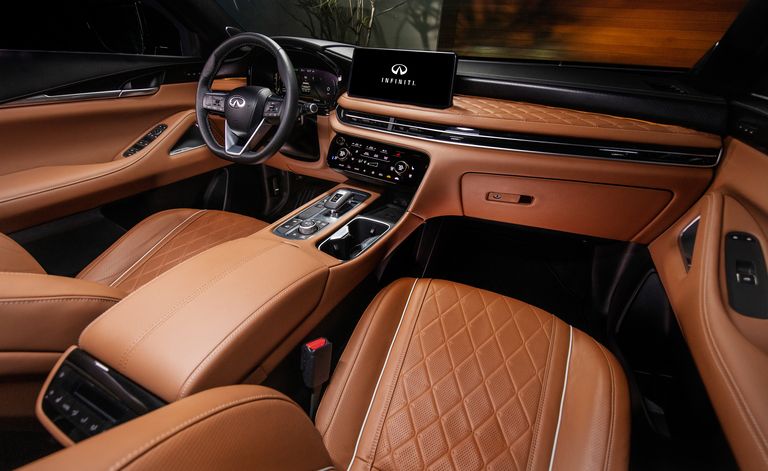 The exterior is dramatically new design for Infiniti, but the real changes come when you step inside. There might be one person who thinks the new interior isn’t an improvement over the old one, but we’d bet there aren’t two. Everything, from the shape of the dash with its sweeping, integrated console to the contrast piping around the seats, is more attractive and more comfortable. The available digital dash is clear and customizable. A 12.3-inch touchscreen sits surrounded by quilted leather, ready to display all your nav and infotainment needs, including Android Auto and wireless Apple CarPlay capability. And, as is sensible when offering wireless connectivity, there’s an optional wireless charging pad. Below the touchscreen, climate controls and massaging seat options are controlled through a backlit capacitive touchscreen, with hard knobs for power and temperature. If you don’t feel like cleaning smudges off the glossy displays, there are redundant physical button and rotary knob controls next to the cupholders, in front of a thick, padded armrest. 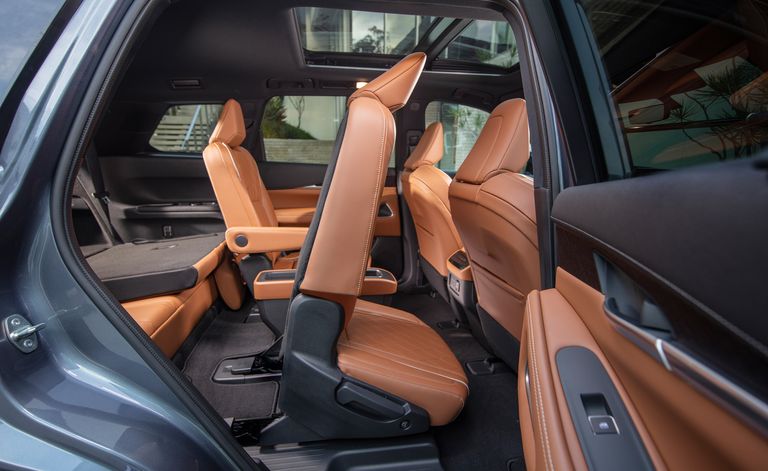 The second row offers an option of bench seat, making the QX60 a seven-passenger hauler, or captain’s chairs with a removable center console. Both versions feature one-touch buttons to tilt and slide the seats forward so third-row passengers can get in or out easily, even if there are child-safety seats in the second row. The seats fold quickly, and entrance to the third row requires no gymnastics, although the uncovered rails of the second row make third-row foot space uneven and messy. Visibility from the third row is good because of the QX60’s stepped-up seating design, which raises each row slightly above the one before it. The standard moonroof makes for even lighting throughout the cabin, but even though it isn’t a dreary back seat, it’s a cramped ride back there, best left to the small and flexible. If you’re carrying cargo that can’t complain, both rows fold nearly flat, offering 41.6 cubic feet of storage. There’s also a large underfloor cargo area, occupying space that was formerly taken up by subwoofers—which are now in the rear panels.

The QX60, sibling to the Nissan Pathfinder, has been a popular vehicle for Infiniti. This redesign addresses criticisms of the dull interior and transmission which, if the price is right, should put it back in competition in the mid-size SUV segment where it squares off the Genesis GV80, BMW X5, and Volvo XC90, among others. The most recent QX60 was the 2020 model, which currently starts in the $45,000-to-$50,000 range, albeit with fewer trim levels. For the 2022 models, Infiniti has yet to release details of available trims, pricing, or EPA ratings, all of which are expected by the end of summer 2021. We hope by then we’ll be driving one.