ORLANDO, Fla. — Except for riding in a cart instead of walking, Tiger Woods at times looked just like he did a year ago in the PNC Championship on Saturday. Just not very often.

The fact he could play alongside 12-year-old son Charlie was enough of a success considering the injuries to his right leg from a car crash 10 months ago in Los Angeles. Woods has said doctors discussed amputation. For three months, he said he was immobilized in a makeshift hospital bed at his home in Florida.

He and Charlie combined for a 62 in the scramble format, tied for fifth, three shots behind Stewart and Reagan Cink. 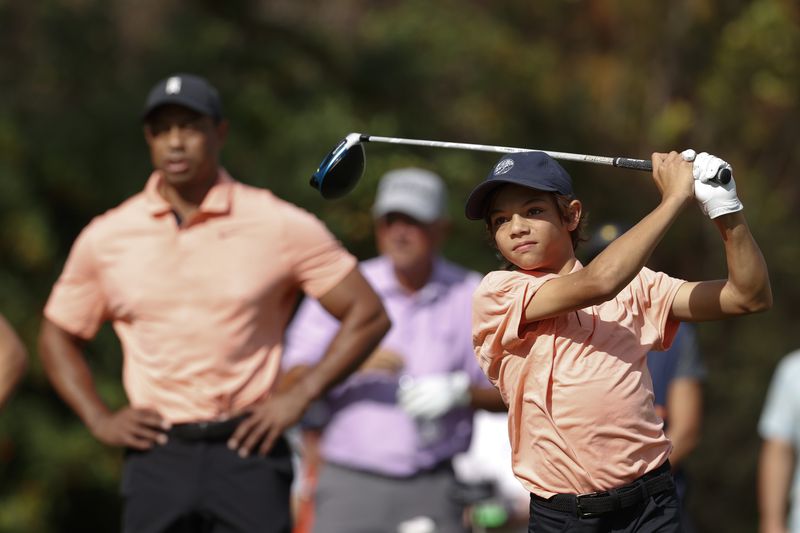 What he got out of this remarkable return had more to do with camaraderie than competition.

“We had so much fun out there,” Woods.

One of those shots that stood out to Woods was on the par-5 third hole, where he hit 4-iron from 220 yards that drew slight back toward the flag and settled 8 feet behind the hole. That was shot he saw in his head and then in the air.

“That was just ridiculous,” Justin Thomas said. “I looked at him and as soon as he sat in the cart, he just kind of looked at me and smiled. And I knew exactly that’s the kind of shots that he hits when he’s healthy.” 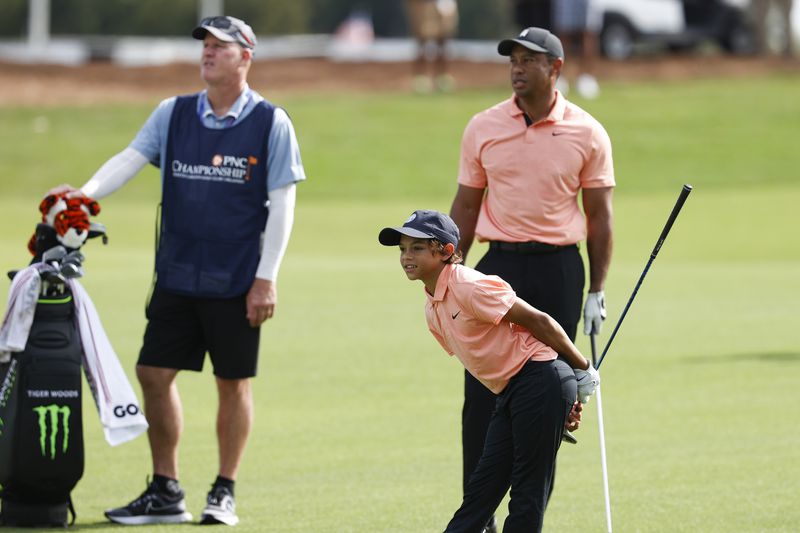 “I don’t have endurance. I haven’t played,” said Woods, whose last competition was the PNC Championship a year ago when he and his son finished seventh against a 20-team field.

Woods also mentioned the fairway metal he hit onto the green at the par-5 14th, and a 7-iron he smoked into the par-3 17th, unsure he could get there.

“It was one of my old shots,” Woods said. 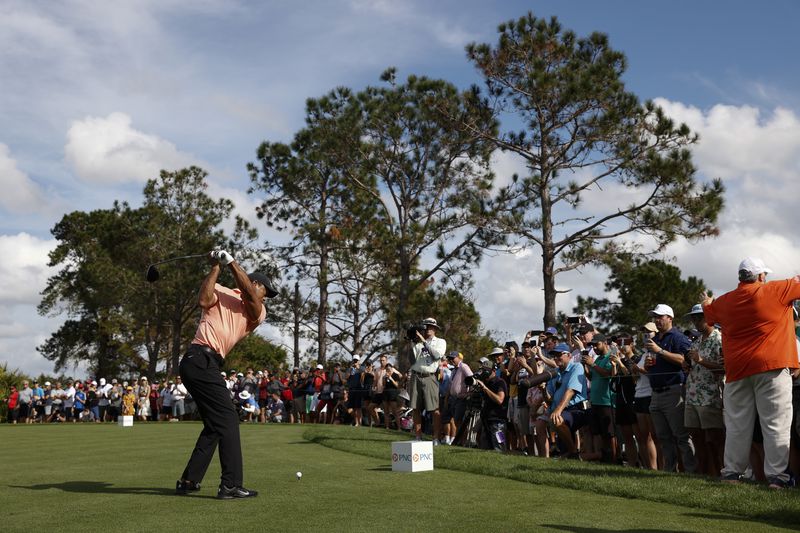 Thomas would have picked another shot. He was determined that Woods, who turns 46 at the end of the month and still walks gingerly from the broken bones in right leg and ankle, not hit a drive past him. That changed on the 11th hole.

“I hit it pretty good and as soon as his ball took that big bounce we looked at each other and I was like, ‘If it’s going to happen, it’s going to be this one because I think it just launched.’ And yeah, that was a shot to the ego,” Thomas said with a grin.

Woods showed the effects of his injuries in the way he walked, labored at times. The toughest walk belonged to Mike Thomas, the 62-year-old club professional with a bulging disk in his back that had been grimacing often.

“Definitely calling it a success both my dad and Tiger made it 18 holes,” Justin Thomas said.

The competitive side in Woods showed in how proud he was that his team managed to keep bogeys off their card for a third consecutive 62 at the Ritz-Carlton Golf Club Orlando.

Thomas and his father shot 60 and were one shot behind along with John Daly and his son. Vijay Singh and his son were another behind. Woods and son were among six teams at 62, which included the oldest player (Gary Player at 86) and youngest player (Karl Stenson, the 11-year-old son of Henrik Stenson) in the field. 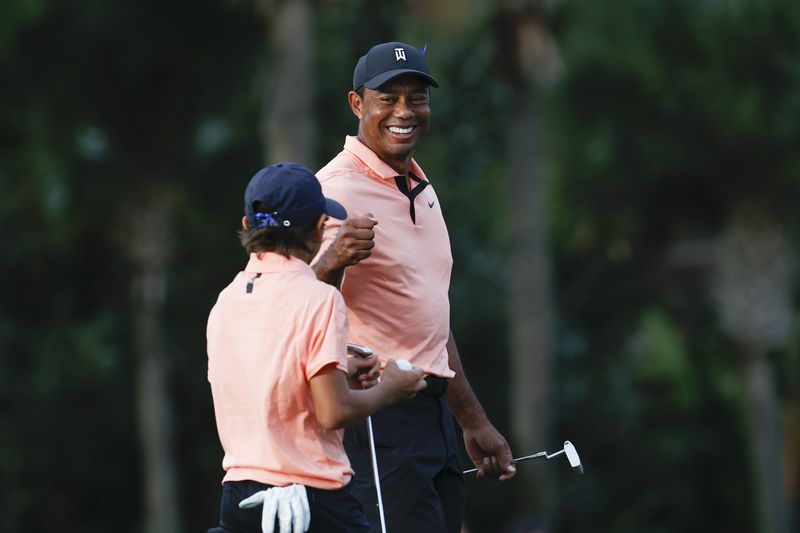 But this network TV show was all about Woods, the biggest attraction in sport, especially now when scenes and reports from his Feb. 23 car crash made it appear it would be a long time, if ever, that he could play at any tournament.

“It’s pretty amazing, isn’t it?” Nick Faldo said. “To go from fearing that you can’t use your foot to standing, he’s gone through every stage and ticking every box with sheer hard work and amazing determination. Maybe this was a goal. This was a great goal for him to come and play with his boy.”

The tournament was a sellout, limited to about 3,000 spectators, most of them chasing around Woods and his son, who delivered his share of good shots. Just like last year, Woods didn’t bother hitting drives on the seventh and ninth holes because Charlie plays from a forward set of tees and pops it out there with plenty of distance.

“I was hoping that Charlie would drive it as well as he did today so I didn’t have to hit as many, save me for the short shots,” Woods said. “I can still hit short irons and I can still putt. That has not left me. The speed and some of the shots — the longer stuff — has.” 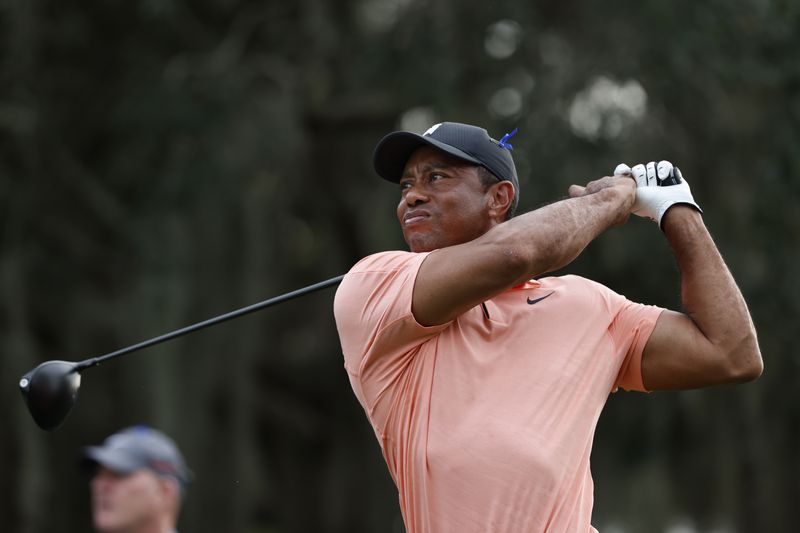 The toughest part for Woods was being in a cart, which was necessary for him play. Woods had said he would never consider applying to use a cart in a PGA Tour event; if that was the only way to play, then he wouldn’t.

“In terms of hitting shots, he’s not that far away,” Thomas said. “But in terms of being able to compete and walk 72 holes multiple weeks in a row, yeah, that’s a different story and he’s the only one who can answer that.”

For Woods, this was fun golf, not the real thing. For now, it was good enough.