COVID-19, Editors Picks, In The News

A new study of hundreds of white-tailed deer infected with the coronavirus in Iowa has found that the animals probably are contracting the virus from humans and then rapidly spreading it among one another, according to researchers.

Up to 80% of deer sampled from April 2020 through January 2021 in the state were infected, the study indicated.

Scientists said the findings pose worrisome implications for the spread of the coronavirus, although they were not able to identify how the deer might have contracted the virus from humans. There is no evidence that deer have passed the virus back to humans.

Researchers and outside experts characterized the study’s findings as a troubling development in the course of the pandemic. Widespread infection among North America’s most ubiquitous game species could make eradicating the pathogen even more difficult, especially if they became a reservoir for mutations that eventually spilled back over to humans. 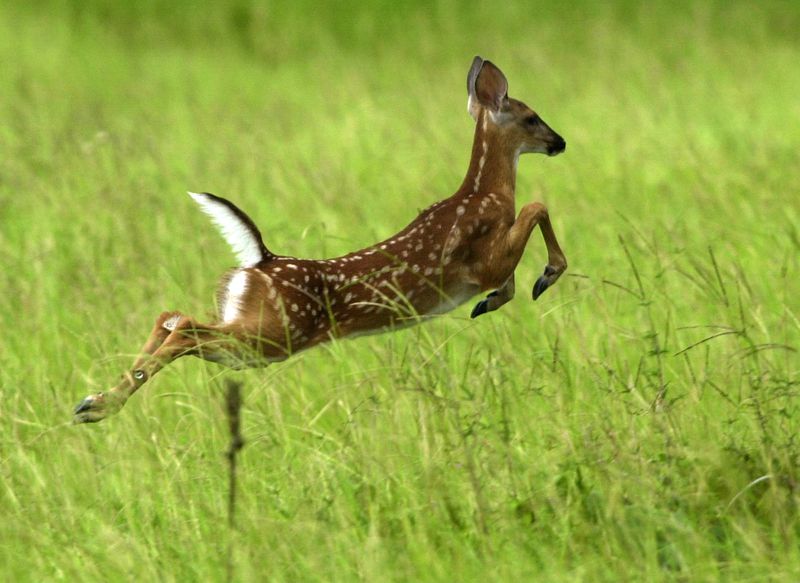 The study has not been published in a peer-reviewed science journal yet, but its authors at Penn State University and wildlife officials in Iowa found the results so disturbing that they are alerting deer hunters and others who handle deer to take precautions to avoid transmission.

Earlier this year, a multistate survey of white-tailed deer by the U.S. Department of Agriculture’s Animal and Plant Health Inspection Service turned up antibodies for the virus among less than half the deer in four states, but that study confirmed exposure, not infection. (Antibodies could mean the deer fought off infection.)

This new analysis — conducted by examining the lymph nodes of samples from roadkill and from those felled by hunters — showed active infections, the researchers said. The veterinary microbiologists who led the Penn State study, Suresh Kuchipudi and Vivek Kapur, said they were not prepared to find such widespread infection. 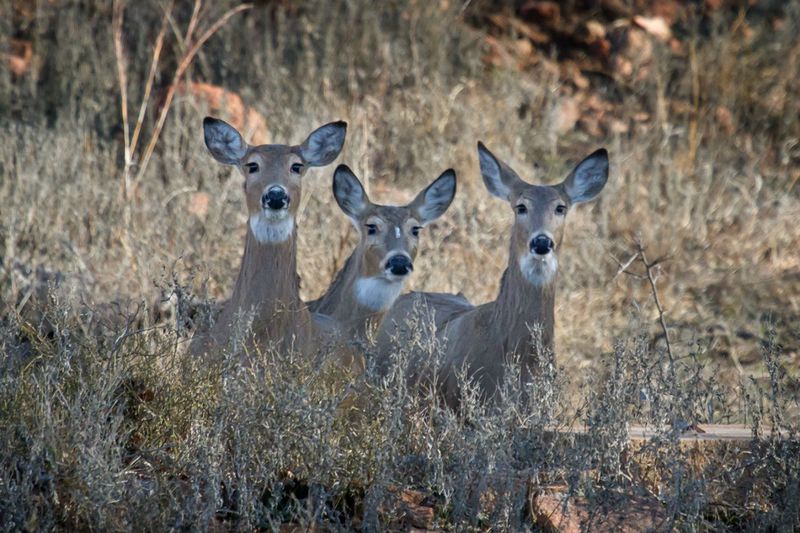 “It was effectively showing up in all parts of the state,” Kuchipudi said. “We were dumbfounded.”

Evidence of transmission from people, the scientists said, was found in the genomic sequencing of the samples collected over months that reflected the virus lineages circulating among humans.

“There is no reason to believe that the same thing isn’t happening in other states where deer are present,” Kapur said.

Previous studies have hinted at such a possibility because a number of other animals are susceptible to infection with SARS-CoV-2, the virus that causes COVID-19 in humans. They include ferrets and primates that have been intentionally infected in lab experiments, zoo animals that caught the virus from their handlers and captive mink that were sickened after being exposed to the pathogen by farmworkers.

In the case of mink, the coronavirus has already demonstrated an ability to sicken animals infected by humans, and last year, Denmark slaughtered its entire population of 17 million farmed mink after scientists discovered they could pass the virus back to people. The virus, they found, had also picked up mutations along the way, but officials said none were especially worrisome.

If the virus were to become endemic in wild animals such as deer, it could evolve over time to become more virulent and then infect people with a new strain capable of evading the current crop of vaccines. 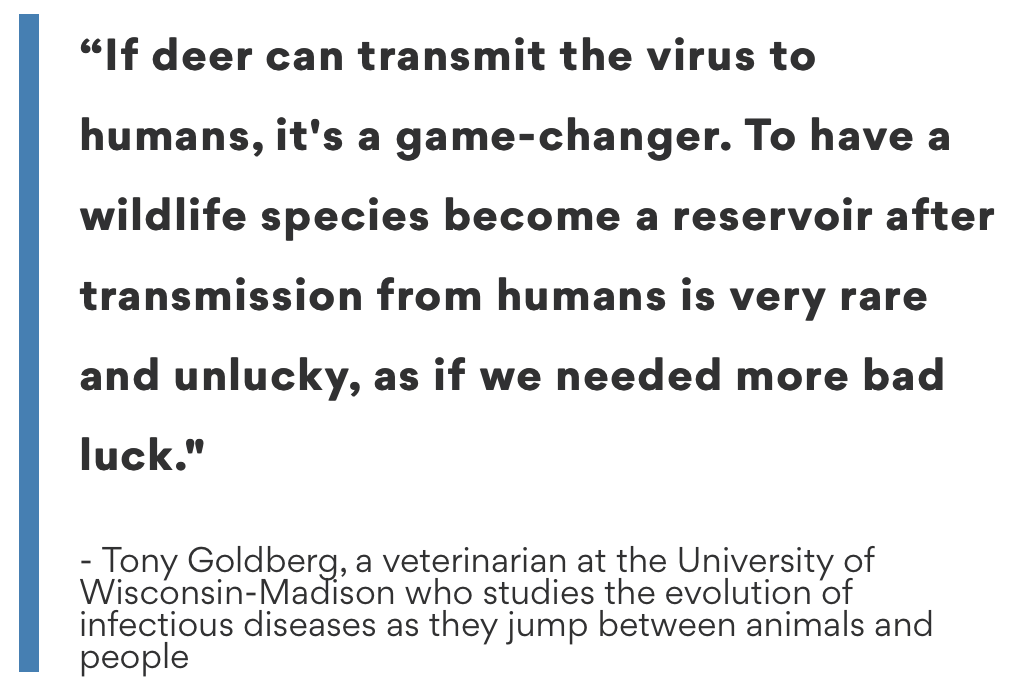 The findings were verified last week by federal scientists at the National Veterinary Services Laboratories, according to a spokesperson.

Scientists unaffiliated with the study who reviewed the findings said they were stunned but not entirely surprised.

“If deer can transmit the virus to humans, it’s a game-changer,” said Tony Goldberg, a veterinarian at the University of Wisconsin-Madison who studies the evolution of infectious diseases as they jump between animals and people. “To have a wildlife species become a reservoir after transmission from humans is very rare and unlucky, as if we needed more bad luck.”

The Penn State researchers have been working with the Iowa Department of Natural Resources, which already conducts surveillance on chronic wasting disease, a fatal neurological illness among white-tailed deer. The first positive test results showed up in September 2020 — in two deer at different ends of the state. Between late November and early January, as the pandemic was surging in humans across Iowa, 80% of the deer specimens tested positive for the virus.

By then, the researchers had tested only 300 of the 5,000 lymph nodes available to them, but the evidence was overwhelming.

Such a high rate of infection, Kuchipudi said, was effectively 50 times greater than its prevalence among Iowa’s human residents during the peak of the pandemic.

What they found as they probed deeper was even more astounding. Using tests to decode the genomic makeup of each viral sample, they found similar patterns between the emergence of mutations and variants in the state’s deer population and those infecting people. Researchers said that offered stronger proof of human-to-deer transmission as well as evidence that deer were then spreading the virus to one another at a rapid clip. Mapping the location of each sample also suggested that the infections were occurring simultaneously across the state as hunting season ramped up. The study’s authors say it is unclear whether the deer were sickened by the infection.

How the virus passes from people to deer, however, is not entirely clear. Rachel Ruden, Iowa’s state wildlife veterinarian and an author of the study, said there were plenty of opportunities for transmission given that 445,000 deer roam the state.

The virus can spread when people feed deer in their backyard, through sewage discharges or maybe when an animal licks a splotch of chewing tobacco left behind by an infected hunter. “Perhaps it doesn’t take much of a loading dose to get deer infected,” she said. “But either way, all of this is a striking example that we’re all in this pandemic together.”

Despite their concerns that the country’s 38 million white-tailed deer could become a lasting reservoir for the coronavirus, experts say such a scenario does not mean all hope is lost in the battle to conquer the pandemic.

A dangerous mutation that one day finds its way from deer to people could be tackled with a booster shot — not unlike how vaccines for the seasonal flu are developed each year. A coronavirus vaccine for deer is also a possibility — scientists have already created them for zoo animals — but the practicality of inoculating millions of free-roaming ungulates would be daunting, to say the least.