VW Very Obliquely Confirms ID.Buzz Will Be Offered as a Camper

Absolutely no other details released about the eagerly awaited upcoming electric Microbus, currently expected as a 2024 model.

Volkswagen has confirmed that a camper version of its ID.Buzz van will be made.

No other details were released, but we can imagine such a vehicle would ride on the longer-wheelbase version of the ID.Buzz MEB electric platform, with front- or all-wheel drive offered. Range could possibly reach 342 miles.

We in the U.S. haven’t been offered a VW camper since 2003, and they weren’t big sellers then.

Buried deep inside a European press release, camouflaged under the headline “Electrification of more European plants,” was this little snippet: “Another vehicle derivative, the ID.California, has likewise been approved for the [Hanover, Germany] site.”

The release is the first acknowledgment from VW that the much-buzzed-about ID.Buzz will, indeed, get a camper variant. Used-car sale prices of past VW camper vans have been steadily increasing, and with good reason. As the pandemic got more people out on the road with their laptops to work remotely and anywhere they darn well pleased, the need for practical camper-style transport grew exponentially. A Westfalia camper van offers much of the same #VanLife practicality as a Sprinter or a full-fledged motorhome while being a lot easier to drive and park. 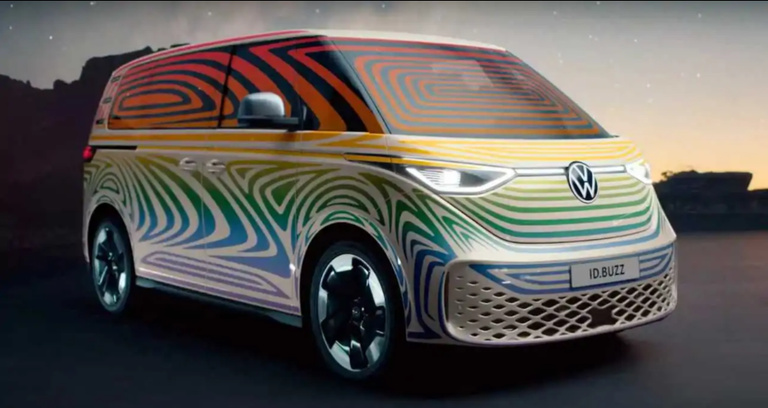 Details of the ID. California are scant, but the regular ID.Buzz van is expected to come with a choice of 82.0- or 111.0-kWh batteries, good for a possible range of up to 342 miles. There should be two powertrain options in the ID.Buzz: single-motor rear-drive or front- and rear-motor all-wheel drive. Volkswagen has already announced that there would be a cargo version of the ID.Buzz called, cleverly, The ID.Buzz Cargo. It will be built on the longer-wheelbase version of the ID.Buzz. All will ride on the purpose-built MEB electric-car platform that sits under all of Volkswagen’s EVs.

While Europe and other markets have been getting Volkswagen camper vans since the very beginning, we here in the States haven’t had the option since the T4 van (Type 4, the fourth-generation van) was last offered here in 2003. That one came in a pop-top version with sleeping for two upstairs and for another two down below when you folded all the seats flat. There was a flip-up table and a cute little refrigerator under the rear-facing seat, too. Winnebago offered a more fully equipped camper version.

Problem was, even when the T4 Westfalias were being offered in American showrooms 20 years ago, few were buying them. Low sales combined with the cost of federalizing the T5 and T6 versions killed any business case anyone in Wolfsburg may have been trying to make for them. It’s still not clear from today’s “announcement” if U.S. sales will be part of the plan for what is being referred to as the ID.California.

We got to spend a few days camping in a Euro-spec T6 California camper three years ago, glommed onto a larger worldwide press launch of that fine camper bus. We found that thing roughly 400 times better than the rickety 2003 T4 we actually own. But it was just cruel of VW to tease U.S. van lovers with that. Now, maybe, we’ll be getting our own. Maybe.

“No word on anything at this point,” said a spokesperson when asked. “Let’s hope it comes here!!”