The New York Times, citing sources familiar with the matter, reported that charges could be filed against the Trump Organization as early as next week related to fringe benefits the company gave to top executives, such as use of apartments, cars and school tuition.

Trump Organization lawyer Ron Fischetti said he met virtually with prosecutors Thursday for about 1 ½ hours to try to persuade them not to seek a criminal indictment against the company, but that the charges would not be unexpected.

“The charges are absolutely outrageous and unprecedented, if indeed the charges are filed. This is just to get back at Donald Trump,” he told The Associated Press on Friday. “We’re going to plead not guilty, and we’ll make a motion to dismiss.”

No charges have been filed thus far in the long-running probe. Prosecutors have been scrutinizing Trump’s tax records, subpoenaing documents and interviewing witnesses, including Trump insiders and company executives. 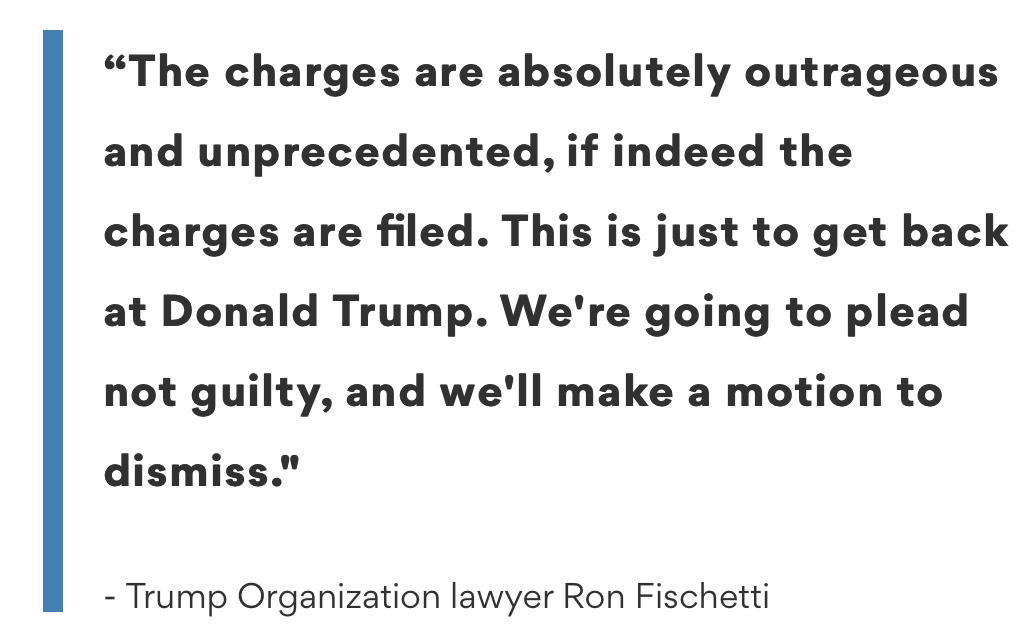 Law enforcement officials familiar with the matter say the investigation has reached a critical point. A grand jury was recently empaneled to weigh evidence and New York Attorney General Letitia James said she was assigning two of her lawyers to work with Cyrus Vance on the criminal probe while she continues a civil investigation of Trump.

Some of the scrutiny has been focused on longtime Trump Organization chief financial officer Allen Weisselberg.

Vance’s investigation of Weisselberg, 73, stemmed in part from questions about his son’s use of a Trump apartment at little or no cost, cars leased for the family and tuition payments made to a school attended by Weisselberg’s grandchildren.

There’s nothing illegal about companies giving lavish perks to valued employees, but in many circumstances those benefits count as compensation subject to income tax.

Fischetti said any charges against the company based on fringe benefits would be overreach by prosecutors.

“We looked back [at] 100 years of cases, and we haven’t found one in which an employee has been indicted for fringe benefits — and certainly not a corporation,” he said. For it to be a crime, he said, “it would have to be for the benefit of the corporation with the knowledge of the corporation. They don’t have the evidence at all.”