BY MAXWELL B. MORTIMER | CarAndDriver.Com

For the average person, the 2021 Toyota RAV4 TRD Off-Road strikes a great balance between grocery getter and two-track champion. As a crossover, it’s fundamentally optimized for the rigors of the paved world, but its rugged looks promise a vehicle that would hold its own if you took it mudding alongside a Wrangler Rubicon. American’s interest in adventure, camping, and wilderness exploration has never been higher, and we continue to flock toward SUVs and trucks in droves—particularly the large and powerful ones. But not everyone is looking for a commitment to the off-roading lifestyle required by a Ford Bronco, a Ram TRX, or even a Toyota 4Runner. As millennials embrace the great outdoors, there’s no doubt that the popularity of vehicles like the Subaru Outback Wilderness, Jeep Cherokee Trailhawk, Ford Bronco Sport, and RAV4 TRD will continue to grow.

At first glance, there’s not much that separates the RAV4 TRD from other RAV4s. It has the same black plastic fender flares found on the Adventure trim, and it takes an astute eye to notice the TRD-specific 18-inch wheels with Falken Wildpeak A/T Trail 01A tires. Making the case more overtly, black TRD badges and Toyota emblems ($65), and black faux-leather seats with red TRD logos on the headrests tell the world that your RAV4 has an appetite for trails. There are also a few more subtle TRD cues—red accents surround the gauge cluster, cupholders, and wireless phone charger, as well as all-weather rubber floor mats with TRD graphics that make cleaning up after a day of outdoor activities quick and easy. 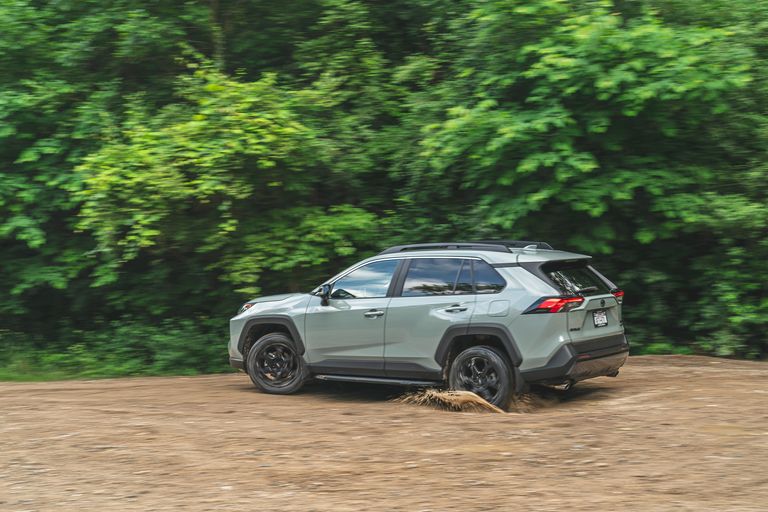 The RAV4 TRD uses red off-road-tuned coil springs with revised damper tuning and new bump stops that smooth the ride both on- and off-road, particularly over washboard-style sections of country back roads and the pothole-infested Michigan pavement that we regularly encounter. However, the softer suspension tuning does make the RAV4 TRD wallow a bit in the course of on-road driving, and that feeling is especially apparent when taking any sort of corner. Considering the improvement in ride quality, though, it’s a forgivable tradeoff.

Unfortunately, the RAV4 powertrain didn’t get any TRD upgrades. When pressed to the max, Toyota’s ubiquitous 2.5-liter inline-four—here making 203 horsepower—pumps out an unpleasant appliance-like moan. The eight-speed transmission does a commendable job handling shifting duties and exhibited no strange behaviors. At the track, the RAV4 TRD is a fair amount less swift than the last RAV4 we tested, hitting 60 mph in 8.4 seconds and the quarter-mile mark in 16.6 seconds at 87 mph. In 70-to-zero-mph braking, the TRD came to a stop in 185 feet, more than 20 feet longer than we’ve measured for RAV4s wearing more normal, non-all-terrain tires. Lateral grip on the skidpad was likewise impacted by the trail-ready rubber, with the TRD managing 0.76 g, well short of the 0.84 g we measured with the standard all-seasons found on other trims. Thanks in large part to the Falkens, the RAV4 TRD Off-Road also gets its own EPA fuel economy rating of 25 mpg city, 32 mpg highway, and 28 mpg combined (other AWD RAV4s are rated as high as 30 mpg combined). We observed 25 mpg during its stay with us and achieved 30 mpg in our 75-mph highway fuel economy test. That’s impressive highway fuel economy for anything equipped with all-terrain tires. 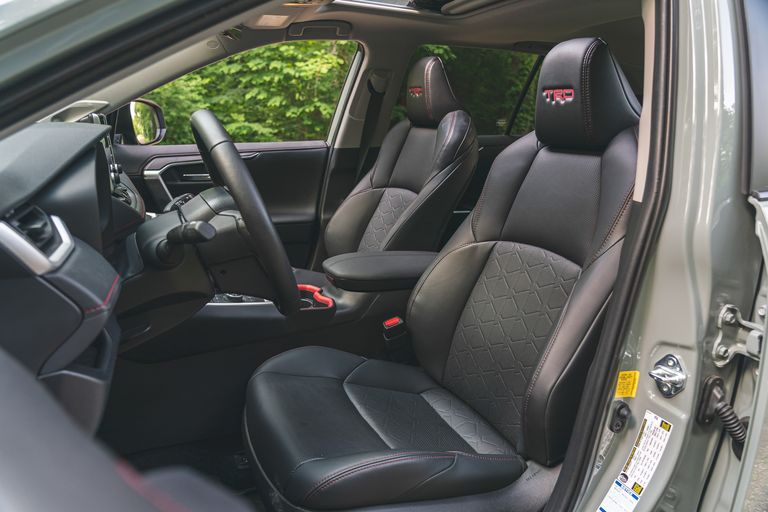 LOWS: Won’t be confused with a 4Runner when off-road, lack of body control, raucous engine sound.

The RAV4 TRD came to us with all the options we would’ve selected and then some, with an as-tested price of $42,822. That included nearly $5700 in options, not all of which were necessary. We’d certainly keep the TRD Off-Road Weather package ($1015), which brings heated and cooled seats, a heated steering wheel, and rain-sensing windshield wipers with a de-icer function. We also appreciated the Premium Audio package, with its 8.0-inch touchscreen with navigation and 11-speaker JBL audio system ($1620). To keep the price under $40,000, nearly $3000 could be shaved by ditching the TRD Off-Road Technology package ($1950), which includes parking assist and cameras, and the running boards ($549) that aren’t useful or necessary. What we wouldn’t mind paying extra for is an engine with more power. But the 302-hp RAV4 Prime isn’t available in TRD guise. 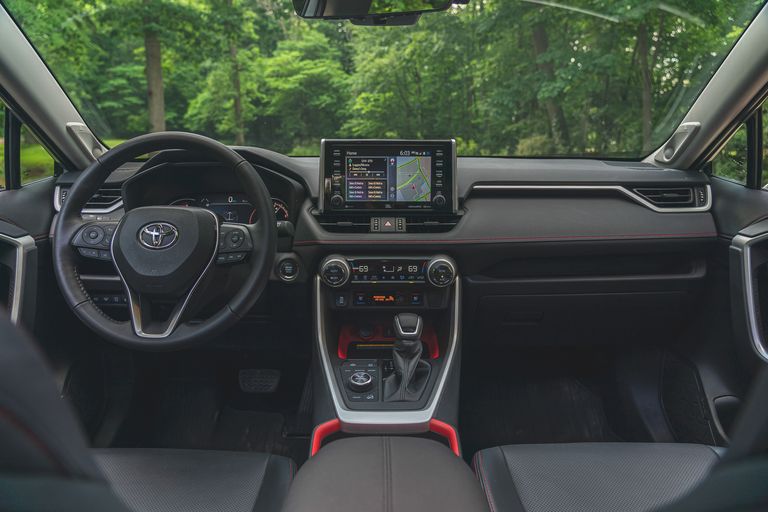 When we took the RAV4 TRD out for a drive one afternoon, it was almost as if the universe knew we wanted to get a taste of this new faux-off-roading idea. As we set out toward the rural countryside of southeastern Michigan, the skies darkened, and it began to rain uncontrollably. Out on the pocked and washed-out dirt back roads, the RAV4 TRD felt right at home, slogging through massive puddles and furrowed muddy two-tracks with ease, abetted by its torque vectoring system, all-terrain tires and 8.6 inches of ground clearance. If you never take it on a trail or attempt to drive through a small pond (as we did last year), you’ll never know what it’s capable of. That’s because the RAV4 TRD’s best trait is its ability to behave like a normal crossover—meaning, much like a Camry—in daily on-pavement driving. The RAV4 TRD’s off-road capabilities aren’t extreme, but they’re worthwhile, and its mud-loving side doesn’t bring much in the way of on-road compromises. You can’t say that about a 4Runner.