It was only 2.5 years ago, after an exhaustive and exhausting five-year renovation and restoration, that television titan Shonda Rhimes wrote in Architectural Digest that her three young daughters “will grow up” and “become women” while living in the Los Angeles mansion she scooped up in early 2014 for $8.8 million from sitcom star Patricia Heaton. Indeed, she said loved the house.

Ms. Rhimes, who just inked a new five-year deal with Netflix — it’s reportedly has built-in bonuses that could push her haul into the $300-400 million range — has since developed other plans because the designer-done mansion, sitting on nearly 1.25-acres along on one of the most prestigious streets in the tony Hancock Park neighborhood, has come for sale with a price tag of $25 million. Should the Private Practice, Scandal and Bridgerton creator get anywhere near her sky-high asking price — and it this white-hot ultra-luxury market it just might, it will obliterate the current neighborhood record for the highest price ever paid for a single-family home set last year when Nickelodeon president Brian Robbins’ lavish spread traded in a covert off-market deal valued at $19 million.

According to Rhimes in A.D., she didn’t even particularly like the 1923 Elmer Grey-designed mansion when she first looked at it. In fact, she called it “an ugly, wrong house” with a wonky “Santa Barbara mission façade” and a “distinctly Italian” backside. She bought it anyways. She soon engaged the services of architect Bill Baldwin, who discovered photos of the original exterior that revealed the front façade was originally, like the rear, designed by Grey as an elegant Italianate villa. With the necessary approvals of the Office of Historic Resources — the estate is in a Historic Preservation Zone, a Chicago stonemason was brought into re-create “every detail of the original front exterior.” The results are undeniably flawless.

White House decorator Michael S. Smith was tapped to do up the interiors in his signature style that Rhimes described as “classic California — if a little bit romantic.” Listing’s held by Ed Solorzano at Berkshire Hathaway HomeServices California show the nearly 12,000-square-foot estate offers a total of seven bedrooms and eight bathrooms, plus four powder rooms. 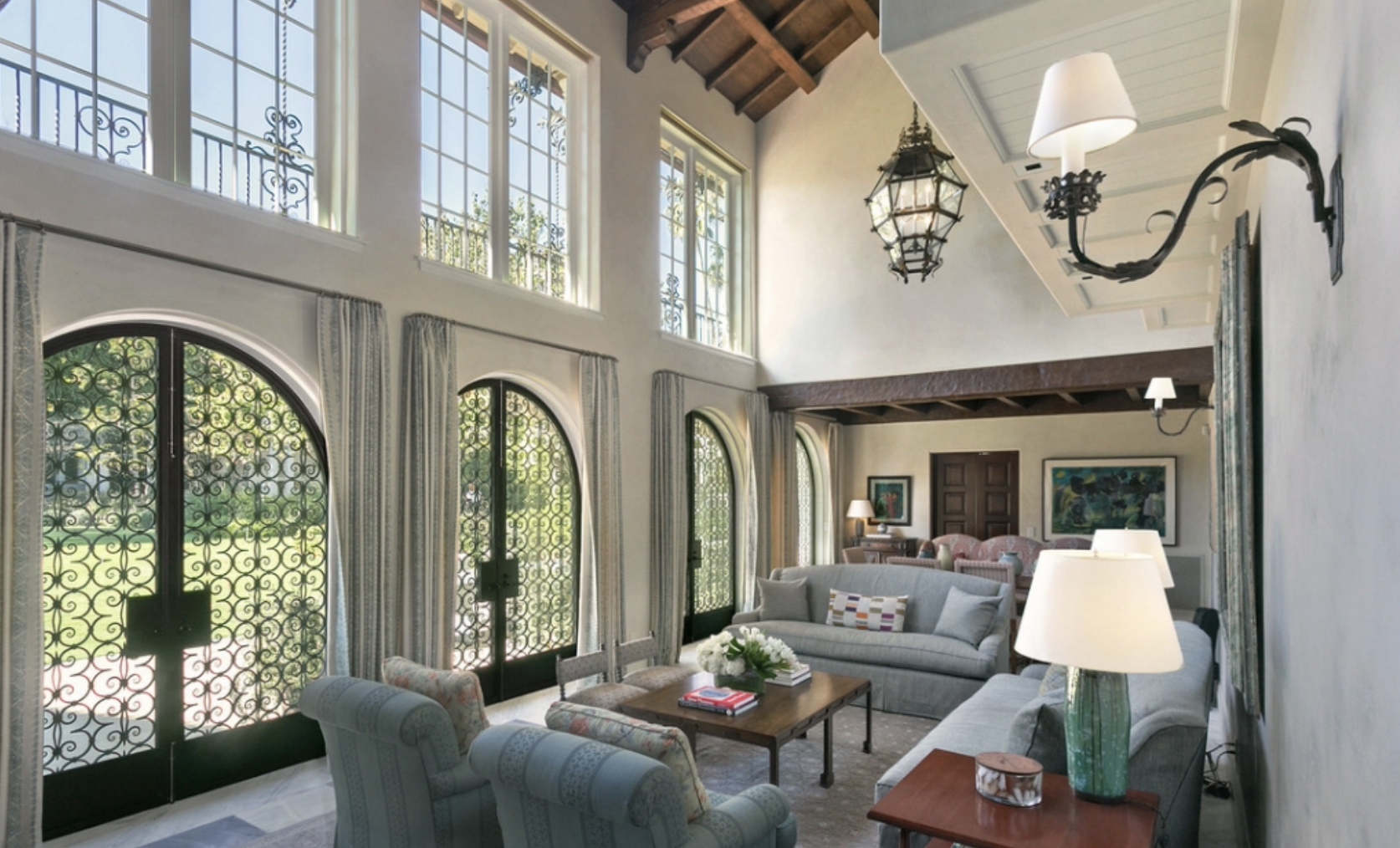 The effervescence of the bougainvillea that balloons over the estate’s low perimeter wall is in contrast to the foyer’s elegantly understated — and heated! — grey-and-white checkerboard marble floor. Like the stonework on the front of the house, the honeycomb coffered ceiling in the living room was painstakingly re-created from original photos of the house.

Several more gathering spaces on the main floor include a library with corner fireplace — Rhimes stores her vintage record collection (as well as an Emmy) in there — and an airy and light-filled double-height salon that spills out to the backyard through a series of arched French doors embellished with curlicued iron filagree.

Gilded Chinese lanterns hang over the lustrously polished table in the formal dining room that comfortably seats fourteen, while the spacious eat-in kitchen, which Rhimes called her “dream kitchen” in A.D., is configured around a huge center island with white marble counters, a gigantic 60-inch range and black-and-white custom floor tiles. Extensive service quarters include a deluxe laundry room and a home office/crafts room.

Just off the kitchen there’s a comfortably appointed family room and, in the basement, there’s a children’s playroom and a professional home theater with plush seating and snack bar.

Five guest and family bedrooms, each with a private bath, are joined on the second floor by a homeowner’s retreat that comprises a bedroom with vaulted ceiling, fireplace and sitting area, as well as a boutique-style dressing room and an over-sized bathroom.

A courtyard enveloped in greenery separates the main house from a detached three-car garage topped by additional living space decked out as a private hair and makeup salon…perfect for someone who’s always walking red carpets and having her picture taken for magazines.

Stone terraces give way to great sweeps of lawn bordered by lush and carefully clipped foliage. The grounds additionally include a swimming pool with poolside cabana, a pickle ball court, a kitchen garden for growing herbs and vegetables, and a secret, boxwood-lined parterre garden with a fountain at its center.

Rhimes, who 3.5-years ago paid $11.75 million for a two-bedroom penthouse pied-a-terre on New York City’s Park Avenue, has long made her home in and around Hancock Park where at one point she owned four homes.

Her neighborhood holdings still include a duplex she acquired 14 years ago for $1.66 million and a nearly 5,000-square-foot English Country manor house she scooped up in 2017 for a tetch under $4.6 million.