NANTUCKET, Mass. — President Joe Biden and his wife, Jill, helped a Washington food kitchen prepare Thanksgiving meals for the needy before they left town — like millions of other Americans — to resume their family tradition of spending the holiday on tiny Nantucket island in Massachusetts.

The first family, including children and grandchildren, arrived on the island Tuesday night and were staying at the home of billionaire businessman David Rubenstein, a family friend, as they have previously. The president was expected to return to the White House on Sunday. 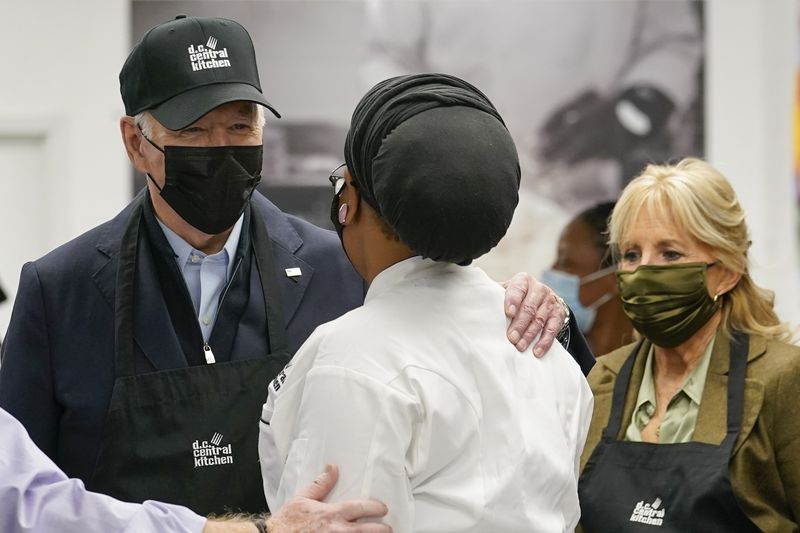 Earlier in the day, Vice President Kamala Harris and her husband, Doug Emhoff, joined the Bidens at DC Central Kitchen, which serves cooked-from-scratch meals alongside training for culinary jobs.

Decked out in DC Central Kitchen aprons, the four dished out turkey, gravy, sweet potato casserole and green beans into trays to be packed up for needy D.C. residents.

Jill Biden kicked off the holiday season at the White House on Monday when she received the official White House Christmas tree — an 18 ½-foot Fraser fir cut from a North Carolina farm that she declared “magnificent.” The tree is destined for the Blue Room as the showstopper of Christmas at the White House — Biden’s first as president. 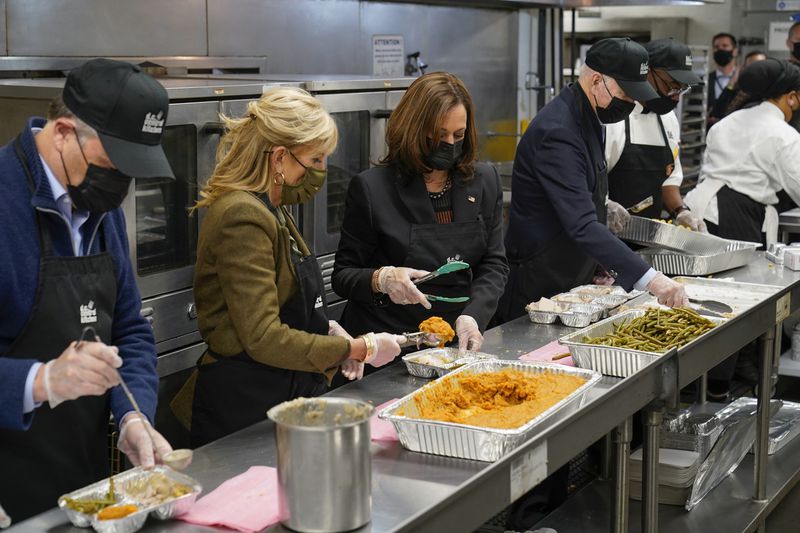 The first lady also joined the president on a visit to the Army’s Fort Bragg in North Carolina later Monday for an early Thanksgiving with servicemembers and their families.

The Bidens were still dating when they first visited Nantucket, with Biden’s sons, Beau and Hunter, in the mid-1970s. The couple was looking for a way out of choosing which of their families to spend Thanksgiving with, the first lady wrote in her memoir.

Biden was a U.S. senator back then, and his chief of staff suggested they go to Nantucket.

“And although neither Joe nor I had ever been, we decided that sounded as good as anywhere,” she wrote. So they packed a cooler with sandwiches and sodas, loaded the boys into the station wagon and drove six hours to the Cape, where a ferry chugged them over to the island.

Thanksgiving on “Nana-tucket” — as their grandchildren call the island in a play on their “Nana” nickname for their grandmother — became the family tradition for the next several decades, though with a few exceptions, the first lady wrote.

Last fall, Biden put tradition on hold over COVID-19 concerns, when people were being told to avoid traveling and gathering indoors in large groups for the holidays. Instead, the then-president-elect hunkered down for Thanksgiving with his wife, their daughter and her husband.

The president and first lady since have received the main two-dose course of the Pfizer vaccine, as well as the third booster shot recommended by public health officials to provide more enduring protection against the coronavirus.

Some Biden family members were at the White House this week. Hunter, his wife, Melissa, and their toddler son, Beau, watched Monday as the official Christmas tree was delivered. Hunter’s daughter, Finnegan, later was seen on one of the balconies, holding brother Beau and watching as their grandparents departed for North Carolina. All joined the trip to Nantucket.

The White House has not said how Biden, who turned 79 last Saturday, plans to spend his time on Nantucket.

In her memoir, the first lady named a favorite restaurant where they would eat lunch and said they would gather on cobblestone Main Street on Friday evenings to see Santa Claus, watch the Christmas tree lighting ceremony and sing carols.

Asked during her Tuesday briefing about the trip, White House press secretary Jen Psaki defended the president’s decision to leave Washington for the holiday by saying that Thanksgiving “is a time to put politics aside, spend time with your loved ones and talk about what you’re grateful for.”

She also noted that Biden is president wherever he is.