Jonathan Igla, who got his start as a writer’s assistant on the seminal advertising drama, digs into his Marvel process.

A decade ago, Hawkeye head writer Jonathan Igla spent long days working on Mad Men, where he started as a writer’s assistant. After work, you might find him alone in the writer’s room, reading writer Matt Fraction’s influential run on Hawkeye while he waited for his ride home.

As Igla read (and re-read) the comic, he found that Hawkeye run was a way to escape the stresses of the day and to take comfort in the familiarity of the pages.

Now Igla is awaiting the Nov. 24 premiere of Hawkeye, a six-episode series on Disney+ starring Jeremy Renner as Clint Barton/Hawkeye and Hailee Steinfeld as aspiring superhero Kate Bishop. The series picks up with Hawkeye learning to be a family man again after losing his wife and children for five years at the hands of Thanos. It also takes place in the days before Christmas, giving Marvel Studios its first Christmas-themed story since Iron Man 3 (2013).

While Igla took a lot of lessons from Mad Men, the Christmas setting saw him draw inspiration from a surprising source: Hallmark Christmas movies.

“I couldn’t say they did not inform the Christmas of the show, a little bit” says Igla, who has watched plenty of the feel-good movies with his partner (and Hawkeye No. 2), Elisa Climent. “In the same way that those movies are comforting, I was reading those comics so many times. There was something that was comforting and relaxing about it. To turn off the stress of the day and try to disconnect from work.”

After rising through the ranks on Mad Men, Igla worked on half a dozen shows, including Netflix’s Bridgerton and Facebook Watch’s Sorry for Your Loss. Hawkeye was his first time leading a writer’s room, and in a conversation with THR, he talks his philosophy on story, writing fake audition scenes and what he learned from Mad Men creator Matthew Weiner.

You started off as a writer’s assistant on Mad Men, taking all the notes in the room, as well as taking notes for creator Matthew Weiner. What did you take away from that experience?

I did that for seasons four and five. In addition to getting to work with the amazing writing staff, there was an extra advantage for me, because I was able to hear in my head, not just the character’s voices as performed by the actors, but I could hear them in my head as performed by Matt. It gave me more insight into what he was thinking. I tried to do that in the [Hawkeye] room. I tried to pitch in character. I tried to pitch dialogue in the voices of the characters so the rest of the writers could hear what I was hearing in my head.

I get a kick out of the image of you working hard on Mad Men and then escaping from the stress by reading Matt Fraction’s Hawkeye comics. Why were you drawn to them?

The premise of the comic book, about a superhero on his off days, is just exactly the superhero story I would want to tell as a writer. I was so drawn to it. I was so drawn to the tiny moments, the little human moments and also the art. I spend a lot of time rightfully praising Matt Fraction, but [artist] David Aja’s style in this comics, and the colors [from] Matt Hollingsworth, it’s distinct and graphically terrific. 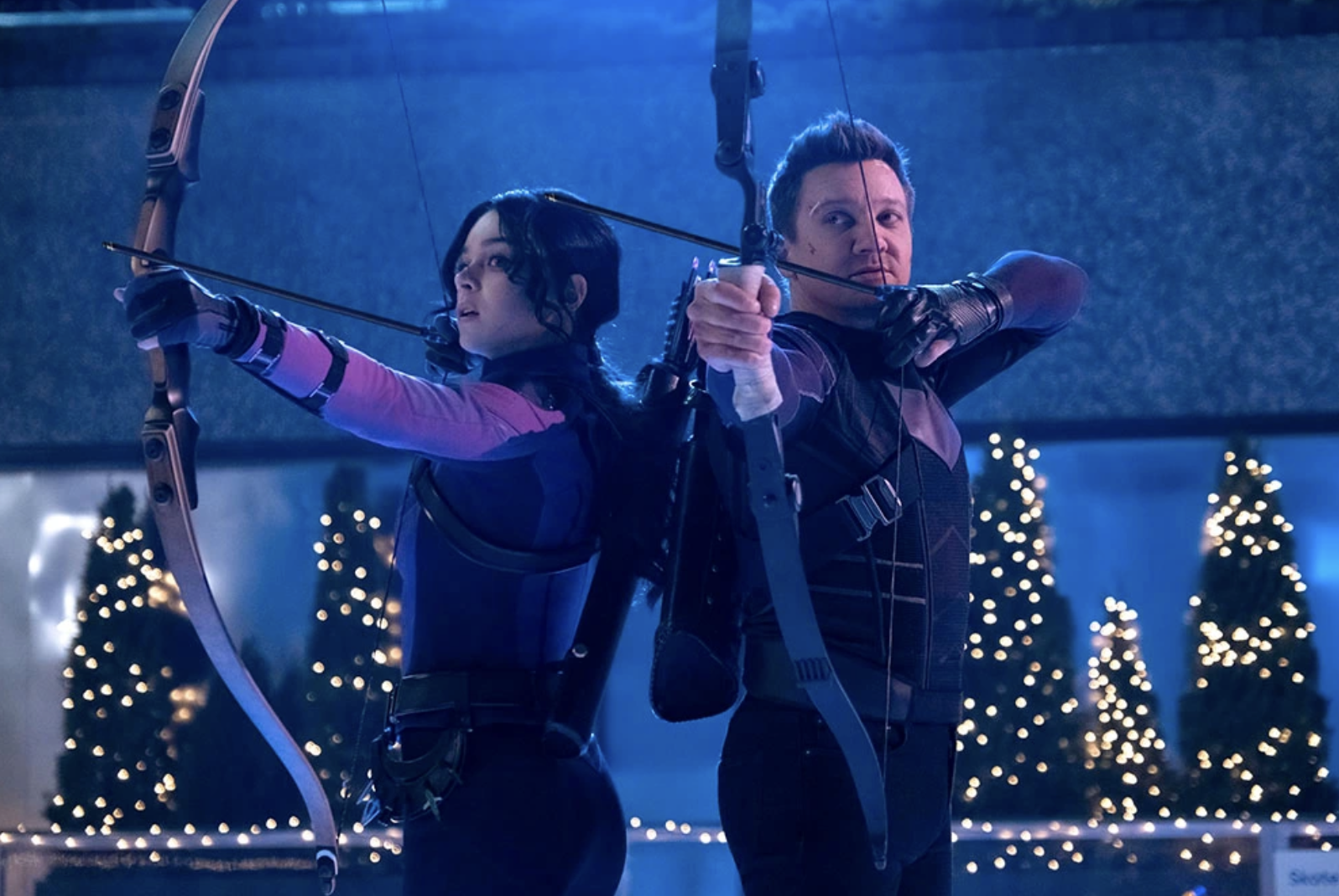 Years ago, Marvel envisioned Hawkeye as a movie. Did you see the general ideas they had for a feature? Or was it a clean slate?

It was a pretty clean slate. The only jumping-off point I felt I had to stick to was what we’d seen of Clint in the movies. And that it was going to be the introduction for Kate Bishop. The pitch process for the show was more fun and more authentic and conversational than all the pitches I had done before, and I have a real desire to bring it forward with me into pitches. I was able to go in and honestly, “This is what I’m excited about. This is what I would love to see as a fan. This is what I would be interested in doing as a writer.” So many times when you go in to pitch on a project you are trying to guess what they want. And because it was so behind the curtain, I was like, “I’m not even going to try to guess what they want. I’m just going to talk about what I would like to do.”

Next you assembled a writer’s room. Did you take any lessons from Mad Men as you broke the story?

I took a lot of specific lessons from Mad Men. The way that we broke stories on Mad Men— we didn’t think explicitly in acts. When I worked on Pitch, we knew how many commercial breaks there were and we knew roughly when they were coming. It was quite a good network TV show that I’m very proud of, but it was a network TV show so we knew we had to have act outs that grabbed people’s attention and kept them watching. On Mad Men, the mandate was to completely ignore the possibility of commercial breaks. Matt placed them in post. We weren’t ever using them as a crutch in the storytelling. We knew that Disney+ wasn’t going to have commercials. That attitude of not using something like an act break or a commercial or a traditional structuring piece as some sort of a crutch. It was certainly something I tried to imbue all of our storytelling decisions with.

You are credited on the script for episode one, but I assume you broke all the episodes with your team?

Marvel wanted outlines for everything before we went off to script. We outlined them in order and generally outlined them as a group. That was also something we did on Mad Men, which I like, because I like everybody to feel as involved as possible on every episode. I certainly enjoyed that when I was a staff writer, to get to feel like I was involved in details on every episode. Then we all went off to write at the same time, to write the first drafts of the scripts.

With a Marvel movie, the writing is basically never done. There’s a writer on set doing production writing. How does that compare to the TV shows you’ve been on or to Hawkeye? Were you continuously writing during production?

For awhile, yeah. They say editing is the final rewrite, which is not my job, but in some ways, the show is being rewritten until the cut is locked. The writing kept going beyond the writer’s room. Not long after that, it was mostly set. Details changed and there are always production requirements and limitations and adjustments. On Mad Men, I know there’s famously a line that Jon Hamm ad-libbed in the first season in “The Wheel” [before Igla joined the staff]. The only time I ever saw an adlib was John Slattery. It was during a rehearsal when Matt was directing so it got the thumbs up. Mad Men was otherwise much more like a theater piece where it was pretty locked.

Were you involved in casting? Alaqua Cox as Maya Lopez was a discovery for the show and is now getting her own spinoff, Echo.

She is terrific in the show. I always say that TV writing is a team sport. At Marvel, because they are a feature company, it’s more like a relay race. I wrote audition scenes, because they are very secretive. They didn’t want any of the actual scenes of Maya (Cox) or Kazi’s (Fra Fee) read by anybody. I did a bunch of additional, new fake scenes that were a fun challenge to try to capture in a few pages everything I knew they would need to see out of the actors.

On Mad Men, we were generally disguising existing scenes. Definitely, every unnamed male character in a scene, who anybody was acting against, everybody assumed it was Don (Jon Hamm), which it was not always.

When it comes to structure, were there key lessons you learned from Mad Men that you applied to Hawkeye?

Sometimes in TV, I think, “This moment is going to be perfect for the middle of episode five,” but as we are getting to the middle of episode three, I realize this is where it needs to go. On Mad Men, Matt was flexible. If the story was ready to get somewhere sooner than we wanted it to, he never wanted to tread water. He never wanted the show to feel like we were holding something back. In television, there is an amount of not being able to predict how the story is going to feel as it’s flowing until you are actually breaking episode four.

“Treading water” is an interesting way to phrase it.

When shows repeat themselves is when you get bored. When they are repeating stakes. When they are repeating dynamics. When you are not feeling that this is an evolution of a conflict between characters. I was very conscious of that on Hawkeye, because I never wanted the show to be boring, and because we only had six episodes to fill. I thought, there is no reason we should ever have to repeat something.

You worked on Bridgerton, which Netflix says is its second-most-watched original series ever, in terms of hours watched. Do you expect to see any internal viewing numbers on Hawkeye from Disney+?

Hawkeye opens with dreams of a kid wanting to be a hero. What kind of kid were you? Were you wandering around with a notebook, dreaming of being a TV writer?

It would be so much more romantic if I could pretend I had a notebook, but it was a laptop. I was writing screenplays when I was 15. I loved comic books growing up and I am not an artist. So at nine or ten I said, “Wait a second. There’s more than one name on most of these. ‘Written by.’ ‘Art by.’ This is a different person’s job! I can do that.” I had a couple of very youthful, “Maybe I can write a novel” and losing steam about a page in, thinking this is way too intense for me at whatever age that was. Then I saw a screenplay for the first time. “Maybe I can do that.”