The pandemic led to a seismic shift in the motion picture business, but the filmmaker isn’t so sure it’s permanent: “Are studios really going to give up billion-dollar movies just to support their streaming service?”

The pandemic led to a seismic shift in the motion picture business, but contrary to the opinions of industry analysts and studio chiefs everywhere, filmmaker Patty Jenkins isn’t so sure the day-and-date strategy will stick.

“I don’t think it’s going to last,” the director told THR during a June 24 jaunt through the revamped Warner Bros. Studio Tour Hollywood, host of a new exhibit featuring Jenkins’ Wonder Woman 1984, which debuted simultaneously in theaters and on HBO Max. “Streaming is great, but everybody is chasing it for financial reasons, and I don’t think the financial support is there to hold up the industry the way that it is,” she said. “It’s one thing if it was only Netflix, but now every company has streaming. People are not going to subscribe to that many. Are studios really going to give up billion-dollar movies just to support their streaming service? Financially, I don’t think it makes sense. I see theatrical coming back, and both should exist and will exist. People like to go to the movies. It’s not because they couldn’t see movies at home. We’ve always been able to watch movies at home. It’s nothing new. I think it’s totally coming back.”

Jenkins attended the Warner Bros. Studio Tour Hollywood to help hype the revamped experience, which reopened to the public on June 26. Among the new features: A “Storytelling Showcase” that details the evolution of Warner Bros. over its nearly 100-year history; “Action and Magic Made Here,” a grand finale experience featuring the DC Universe, Harry Potter and Fantastic Beasts franchises; and an expansive Warner Bros. Studio Store with new items and memorabilia. Nearby: a Friends experience that features an updated Central Perk and Friendsboutique.

Jenkins had a heavy hand in selecting the items on display from the Wonder Woman franchise, including the props and original costumes worn by Gal Gadot, Chris Pine and Kristen Wiig. The Hollywood Reporter caught up with Jenkins on how she’s adapting to the Star Warsuniverse, the rest of her 2020 schedule and what it was like to see all the Wonder Woman memorabilia on display — especially those gold wings.

Now that you have some distance from the release of Wonder Woman 1984, anything you would have done differently?

I don’t know what I would have done differently because I feel that, at the end of the day, it was a compromised decision based on a series of compromised options. There wasn’t a good option. Unlike a lot of the movies coming out now, we had been sitting on a finished movie for a while. From there, we watched as every movie was cascading back. What we were faced with was a pile-up [of releases]. The theaters literally asked us to do it. They said, “We’re going to shut our doors if nobody comes in.” So what are you going to do? I am filled with sadness that it didn’t get a real theatrical run. I hope one day it does. It completely changes how people see it, but what are you going to do? It happened. So many people had terrible things happen during the pandemic, and we were one of the losses.

You had one of the best announcements of the pandemic, in my opinion, when you suited up and revealed that you are directing Star Wars: Rogue Squadron. How is development going?

It’s going amazing. I had been on it already for six months before I even announced that, so we’re pretty deep into it. We’re finishing a script, crewing up, and it’s all going wonderful. I’m so excited about the story and excited that we’re the next chapter of Star Wars, which is such a responsibility and such an opportunity to really start some new things. It’s really exciting in that way.

What is the consulting process like with the Star Wars brain trust?

There’s plenty of it. It’s an entirely different way of working. I’m on the phone with all of them and doing Zoom meetings with everybody involved in Star Wars all the time. I’m fairly free to do the story that we want to do, but you really need to know who’s done what, who’s doing what, where it goes and how it works, and what designs have been done before. It’s a whole other way of working that I’m getting up to speed on.

We’re sitting here at the Warner Bros. Studio Tour space. I saw you were able to walk around a bit and see the Wonder Woman installation and the other films featured here. How did it feel for you to see your work on display here?

It’s completely surreal. When you’ve worked on a lot like this, you find yourself saying, “Oh my God, Casablanca shot here? Get out of here!” Then you turn a corner and your stuff is on display. It’s almost impossible to marry those two things — the legendary films that have shot here and the fact that I have now entered that history [with Wonder Woman]. It’s wild. It’s also incredible to see items and costumes that we designed and labored over on display. It’s really great to see the golden wings. We actually made those on set and so rarely got to see them actually extended because it’s not something you could practically shoot very well. To see them on display in their full glory is amazing. 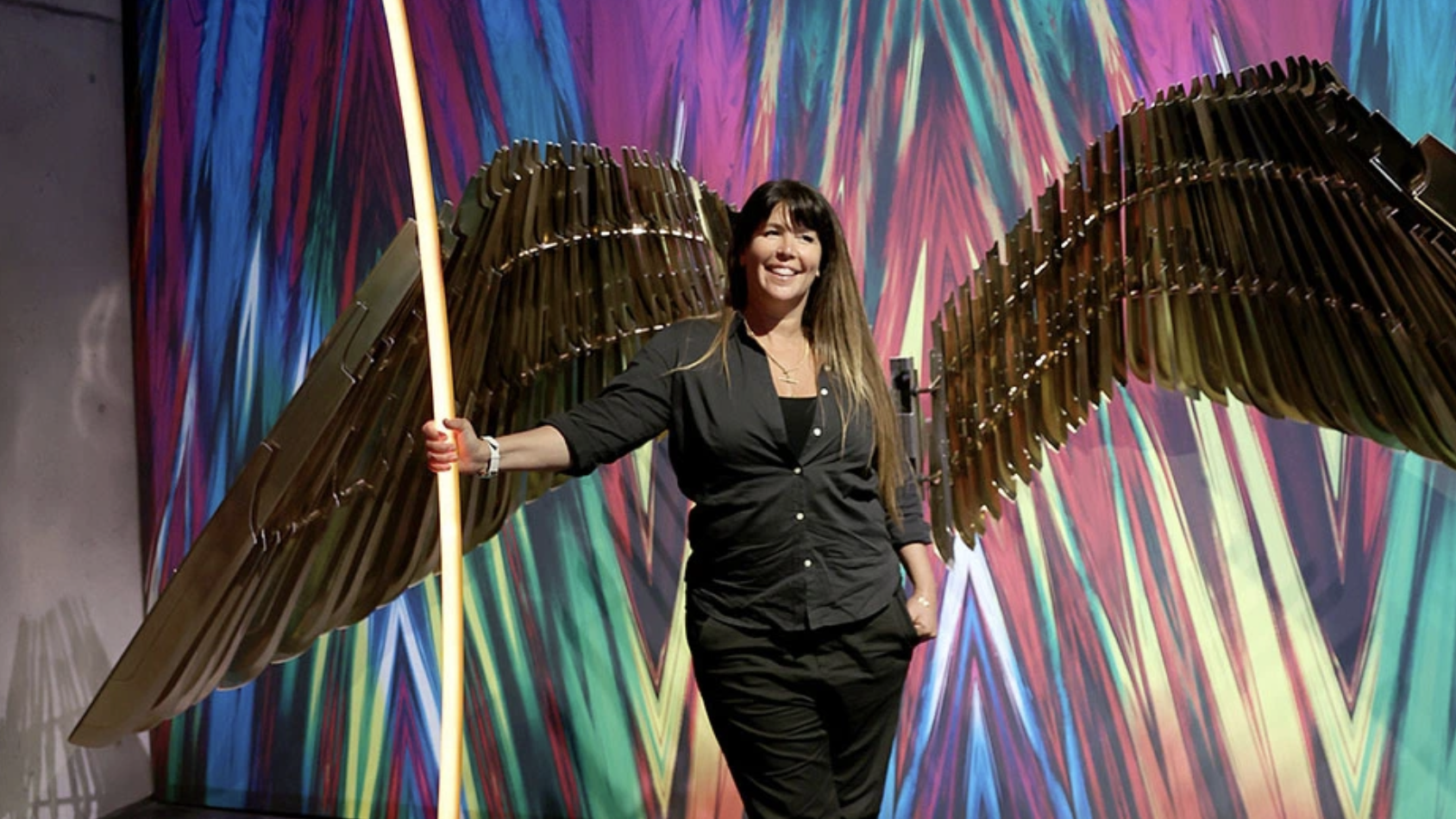 When you see the full exhibit, is there an item or detail that jumped out at you?

First of all, everything here I approved 700,000 times. They showed me how they were going to do the lasso, the wings and all those things. It’s also funny because it is such an involved process to make every single [object]. Everything that’s on display is something I looked at 40 different versions of. Like Dr. Maru’s book, for example, we labored over how it would look, what the lock looked like, how it closed, and so on.

Those are the kind of details they might not teach you in film school. If you could go back and tell that version of yourself something to prepare for what you’re doing today, what would you say?

It’s so funny, I was just talking about this. I had a book called The Movies when I was a kid, and it was published in the ’50s. I was so obsessed with this book. I looked at the pictures over and over again, and I knew all the silent film stars. I was so interested in illusions and how filmmakers would accomplish certain things visually, never thinking that I was going to be a filmmaker. I crossed over to filmmaking from painting in a fine art school. I never thought of being a Hollywood director at all. I was obviously very interested in it, but I got here in a sort of accidental way by following one step to the next. Next thing I know, I’ve entered the book I had looked at so many times as a kid. That’s wild. I’m a Hollywood director now — that’s so crazy.

And now to be among these other films here, too. Did you have any favorites from inside?

The Harry Potter exhibit. I’ve met J.K. [Rowling], and I’ve been shooting at the studios where they made Harry Potter. Also, I have a son who’s a fanatical fan. The fact that something like that has been made by people in our times is legendary. I don’t know that the people who invented DC Comics could’ve comprehended how significant their contributions would be, and to now have something like Harry Potter created by this generation sitting alongside that — I am blown away by that legacy.

What does your schedule look like for the rest of this year?

Work. I can’t tell you what a relief that is. I was so exhausted after Wonder Woman 1984. I can’t believe what a relief it feels like to go back and make another one. That’s what’s been so surreal. There was something so odd about the pandemic with everything down. Just the thought of, “We’re going to go location scouting.” I know how to scout! These are things I know how to do. Whereas everything that we did during this pandemic was so confusing and unusual. I’m just so excited to be working and making a movie. It feels like a warm embrace instead of an overwhelming task. That’s such a delightful surprise.