The Japanese battery maker revealed the 4680 battery that Tesla promises will allow for five times the storage capacity while being cheaper to build.

Panasonic has debuted its 4680 cylindrical battery that was previewed at Tesla’s Battery Day event last year.

The battery will purportedly store five times as much energy and cost half as much to build as the 2170 lithium-ion cells Tesla currently uses in the Model 3 and Y, which are also provided by Panasonic.

Panasonic has also entered into an agreement to supply batteries for the Canoo Lifestyle Vehicle, product of an American startup that expects to start building the car in late 2022.

Battery technology is constantly evolving, and the latest advancement comes from Panasonic, which revealed a prototype of its new 4680 battery cell. Automotive News reports that the advanced-technology battery is due to power future Teslas, saying the 4680 batteries will have five times the storage capacity of current Tesla battery packs and will cost 50 percent less to build.

This is the first time Panasonic has unveiled the 4680 battery. Tesla’s earnings report issued earlier this month said it was testing battery packs using the 4680 cells. Panasonic constructed a test line for the new format earlier this year. 4680 refers to the battery’s dimensions: 46 millimeters (1.6 inches) wide by 80 mm (3.1 in) tall. Tesla claims that there will be a 100-fold increase in battery production by 2030 thanks to the new battery type, and that the new cell design produces six times the power of current cells.

The head of Panasonic’s battery operations, Kazuo Tadanobu, said at the meeting, “We have developed this because of the strong desire of the other party, and we think this can only lead to stronger ties.” Panasonic has a battery manufacturing plant in Nevada, supplying the Tesla Gigafactory. According to Electrek, Tesla claims the first vehicles with the 4680 battery cells will be delivered next year. Tadanobu also said that Panasonic does not intend to build cheaper lithium-iron phosphate (LFP) batteries for standard-range Teslas, even though Tesla’s report said the company plans to start using those in its “standard range” vehicles worldwide. 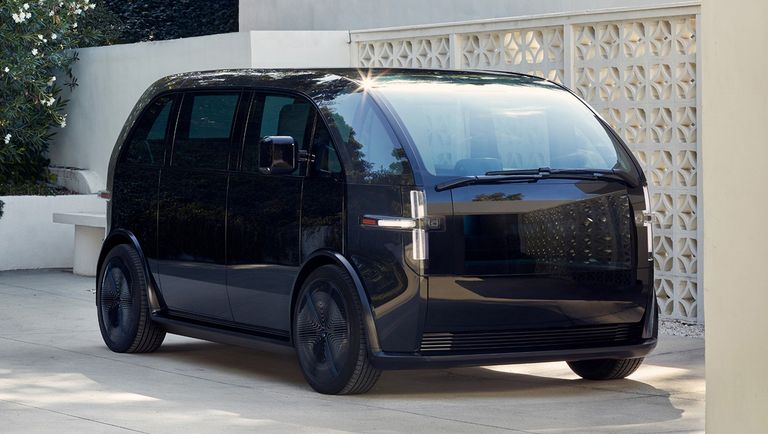 Along with building the 4680 batteries for Tesla, Panasonic will also supply batteries to American electric startup Canoo, which recently announced an agreement with the Japanese electronics corporation. The batteries will power the Lifestyle Vehicle that Canoo predicts will begin production in the fourth quarter of 2022, with Dutch contractor VDL Nedcar building the vanlike vehicle for the European and American markets. Canoo said they chose the Panasonic batteries—which will not be the Tesla-specific 4680 format—for their proven reliability. Canoo is claiming a range of 250 miles from a 80.0-kWh battery, with the base panel van version starting at $34,750.