NASA launches DART mission to crash into an asteroid: What happens next

The DART probe rocketed to space atop a SpaceX Falcon 9 rocket in a test run for a potentially planet-saving move.

Nine engines of a SpaceX Falcon 9 roared to life Tuesday, launching a NASA probe from Vandenberg Space Force Base in California at 10:21 p.m. PT. The Double Asteroid Redirection Test probe, known as DART, is programmed to head toward a tiny rock millions of miles from Earth and then collide with it.

Just under nine minutes after launch, the booster that launched DART into space returned to Earth, landing on a droneship in the Pacific Ocean. NASAwill now wait for “acquisition of signal,” which will let scientists back home know DART is healthy and ready for its long cruise to the rock.

The dazzling night launch signifies the potential dawn of a new era in planetary defense. NASA wants to demonstrate that DART can nudge an asteroid, in this case the moonlet known as Dimorphos, off course. This particular rock orbits a bigger asteroid known as Didymos. Neither poses any threat to Earth. However, if our telescopes did spot a killer asteroid headed directly for us, we may need to resort to this kind of deliberate collision (in scientific parlance, a “kinetic impact”).

That makes DART something of a test run for a potentially planet-saving maneuver. Over the next year, the probe will power up its ion thrusters and slowly gain speed as it makes its way toward the asteroid pair. The violent rendezvous is scheduled to occur in September 2022 at around 15,000 miles per hour. “That’s like going from New York City to Los Angeles in less than the blink of an eye,” said Denton Gibson, of NASA launch services, during the livestream.

NASA predicts the crash will be strong enough to adjust Dimorphos’ orbital period by a few minutes. Calculations show the impact will bring Dimorphos closer to Didymos, and Earth-based telescopes will be able to pick up the incremental change. We won’t have confirmation of DART’s success until sometime in the back half of 2020.

The results will inform future planetary protectors about how best to avoid or shield against a dangerous rock — something the dinosaurs could have used 66 million years ago. In space, even tiny nudges can cause huge changes in trajectories, so as long as we can detect the rocks (and that’s a whole other thing) we should be able to push them off the cosmic highway to Earth.

DART is rather simple. It’s a relatively inexpensive metal box with two rollout, extendible solar arrays for power, a single camera and a smaller satellite, or CubeSat, that’ll be deployed right before impact. The limited number of tools makes sense, as the spacecraft is doomed to die in a suicide mission. 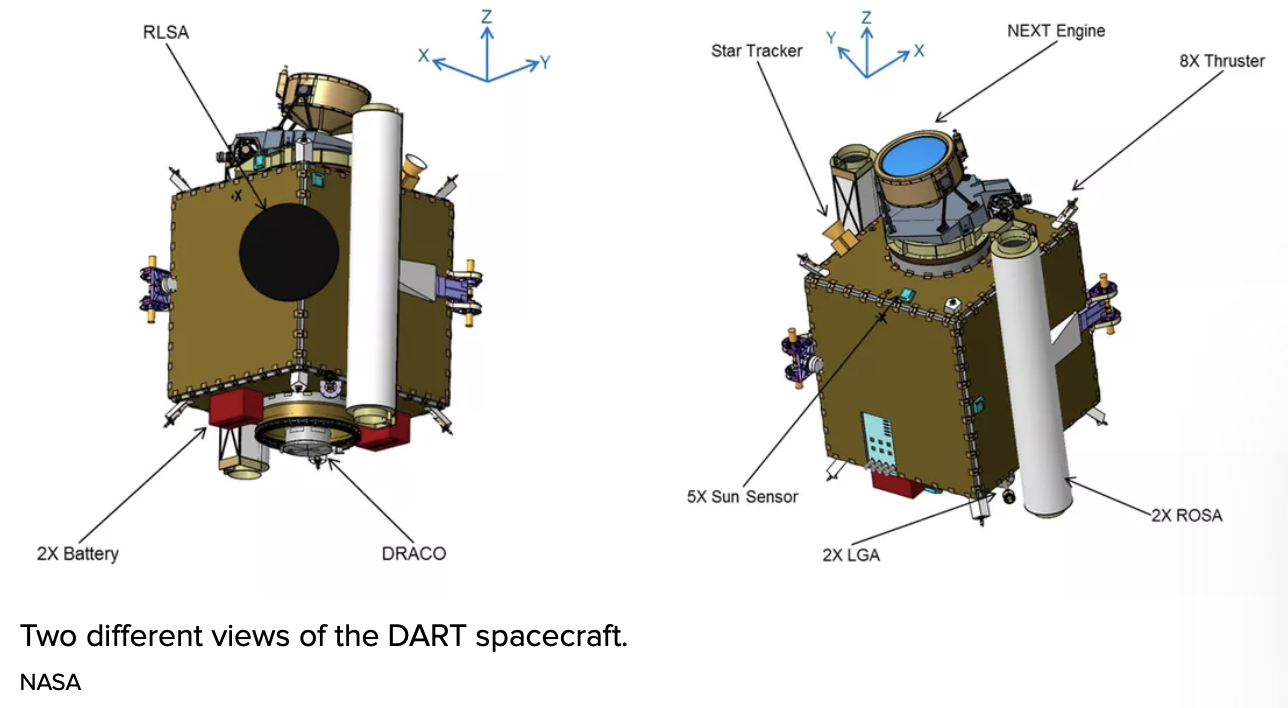 Here are some specifics about the DART spacecraft: 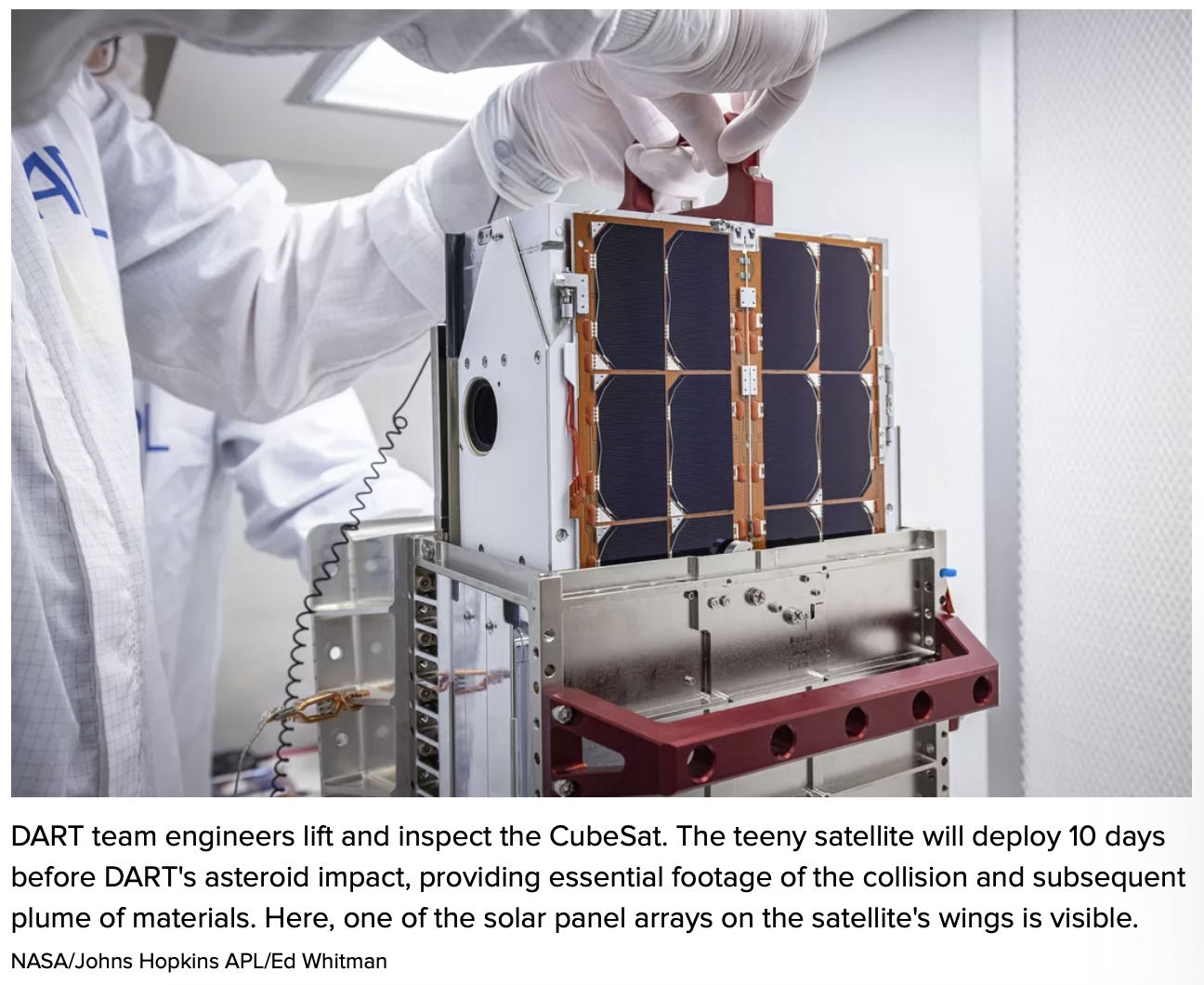 While DART’s spacecraft payload is hyper-minimal, the team’s programming behind the course is highly advanced. That’s because the brave little craft is going to behave autonomously throughout the mission.

What science is DART doing?

The spacecraft’s tools may be few, but they’re key. The Didymos Reconnaissance and Asteroid Camera for Optical navigation, or DRACO, device is an ultra-high-resolution camera that can measure the size, shape and geologic composition of asteroids in its vicinity.

DART also has a metal-oxide semiconductor and image processor that’ll help the spacecraft determine the precise positioning of Dimorphos and stream information back to Earth in real time by way of an antenna attached to the machine.

In addition, DART will be armed with a navigational toolkit with state-of-the-art directional coding, including the star tracker, to ensure it hits Dimorphos at exactly the right moment — ding, ding: the 7 million miles (11 million kilometers) checkpoint. Ten days before DART smacks into its target, it’ll send its CubeSat out. That offshoot will preserve the kinetic impact’s chronicle long after DART turns to rubble.

DART will perform its duty right up until the end. NASA hopes to catch the collision’s juicy details before, during and after impact, so “in its final moments,” the Johns Hopkins University overview says, “DART’s DRACO camera will help characterize the impact site by providing high-resolution, scientific images of the surface of Dimorphos.”