A full recovery will have to wait, and studios are now adjusting their expectations: “The bar for what type of movie is worth it in theaters has grown higher.”

Hollywood studio executives breathed a sigh of relief in October and November when overall moviegoing comfort levels hit an average 76 percent, the best of the COVID-19 era. While consumers ages 35 and older still were more nervous than their younger counterparts, progress was being made. Yet those comfort levels plummeted 10 points to 66 percent by Christmas — the lowest since August, during the delta wave — as COVID-19 cases spiked again due to the omicron variant, according to National Research Group, which polls moviegoers on a weekly basis.

The box office recovery was again in peril. Sure, December superhero blockbuster Spider-Man: No Way Home did huge business — the box office now belongs to males ages 18-34 — and families turned up for Sing 2. But adult-skewing fare like West Side Story, The Matrix Resurrections and The King’s Man stalled.

Omicron capped a year of reckoning and existential crisis for Hollywood as other adult-leaning films languished. Studios raced to get their films in the home early, beginning with Universal, which struck landmark deals with theater owners to make the studio’s films available on premium VOD for $19.99 as early as 17 days after opening, a practice others quickly followed. And chaos continued when WarnerMedia carried out its plan to make all of its 2021 available at the same time in theaters and on HBO Max. Disney tried various models, including opening Black Widow and Jungle Cruise, among other titles, in theaters and on Disney+’s Premier Access ($29.99). Warners has pledged to return to an exclusive 45-day theatrical release in 2022, while Disney is holding its cards closer to the chest. 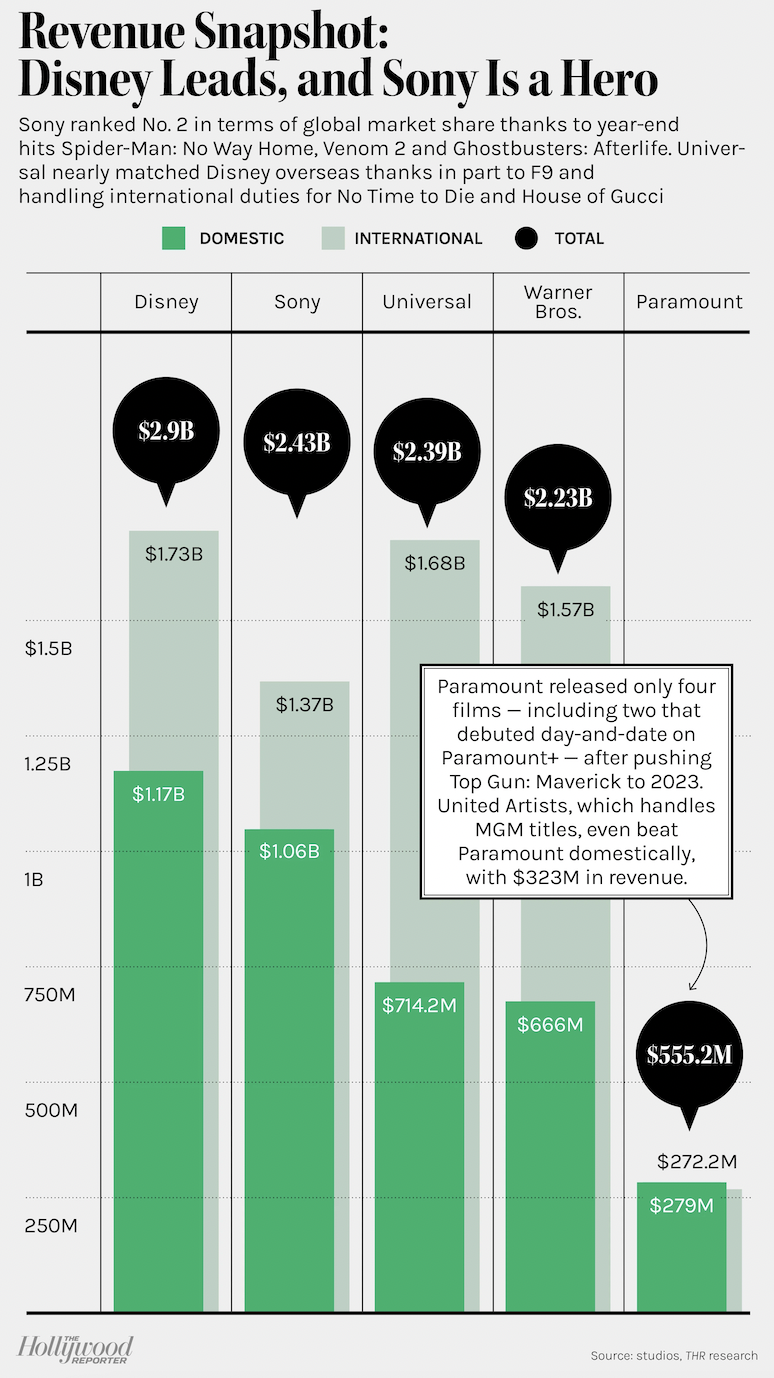 Says NRG executive vp Ethan Titelman: “We were all hoping for 2021 to be a major comeback year for the theatrical industry, but like many other aspects of our lives, this was a year full of starts and stops and we are all still assessing the long-lasting damage that the pandemic has caused. There were certainly bright spots, such as in October, when the box office performed at 88 percent of the average 2015 to 2019 levels. This showed that we can return to something close to normal with the right content and release strategies.”

He adds, “There is also a realization that the world has forever changed. The bar for what type of movie is worth it in theaters has grown higher and higher; 2022 will be a crucial year to bring all audiences, especially older moviegoers, back into the habit of seeing [films] on the big screen in a communal setting.”

Sony was the supreme winner at year’s end, thanks to fanboys flocking to see Venom: Let There Be Carnage and Christmas blockbuster Spider-Man: No Way Home, which has grossed nearly $1.4 billion and is the first film to do pre-pandemic level business.

It’s never good when one demo — in this case, males ages 18-34 — are driving the box office. “Yes, it has been harder in these times to maximize a diverse lineup of films,” says Universal international distribution chief Veronika Kwan Vandenberg. “Audiences are tending to come for that one particular film or that special experience but have not completely changed their habits back yet. I do think this will change over time.”

One glimmer of good news aside from Spidey: Now that kids over 5 can be vaccinated, families are turning up in greater numbers. Universal and Illumination’s animated Sing 2earned a pleasing $145 million to date. “It may become a leaner, meaner business with fewer theaters chasing the same dollars,” says Comscore’s Paul Dergarabedian. “It’s a conundrum for the industry. They have got to get older adults to come back. That’s a problem.”

“2021 was a time of transition of experimentation,” says Paramount domestic distribution chief Chris Aronson. His studio released far fewer movies than its rivals but released on one of the most profitable films of the year, A Quiet Place Part II, and likewise saw solid results when releasing two family films, Clifford the Big Red Dog and PAW Patrol: The Movieon theaters and on Paramount+. 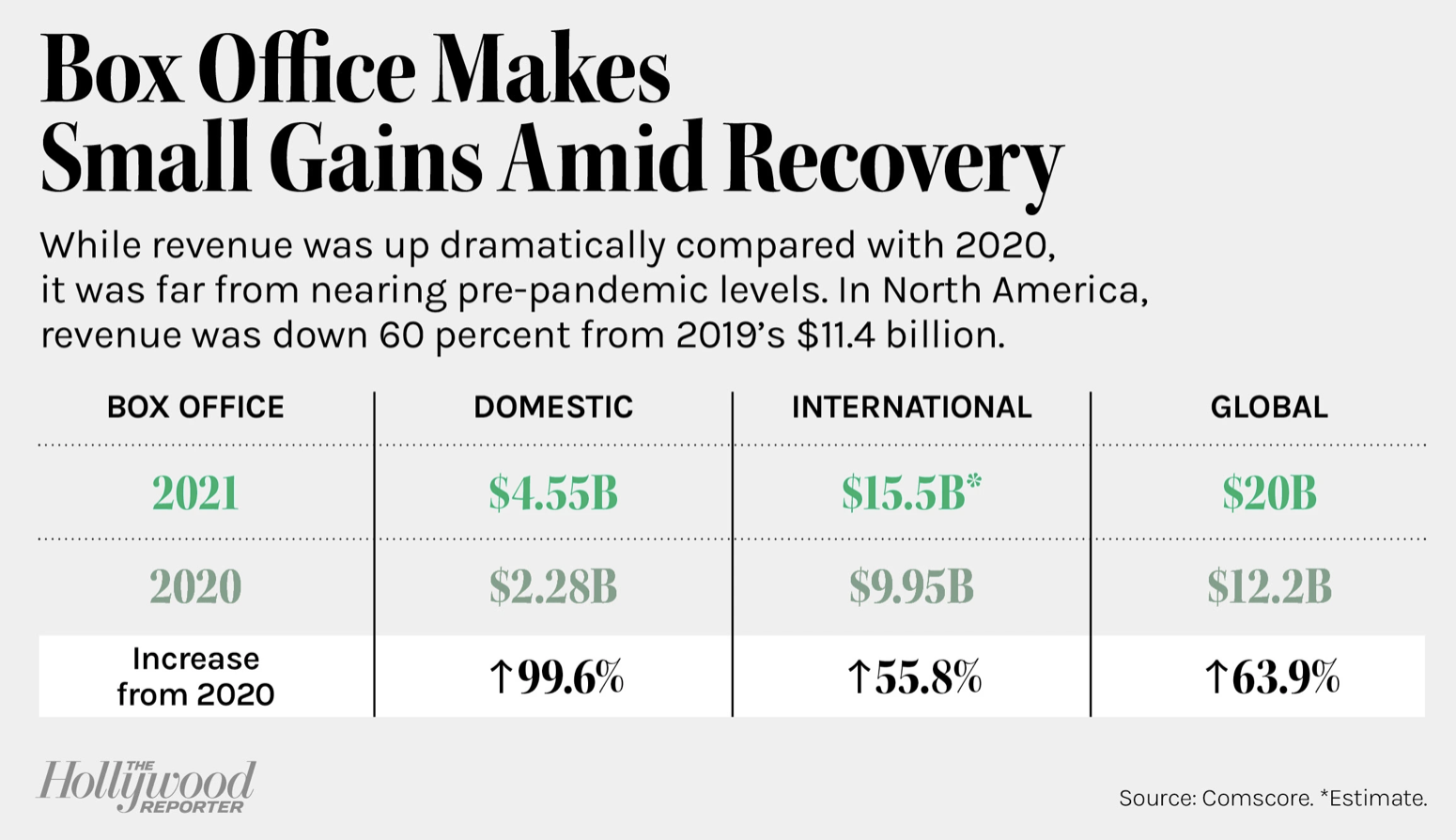