Chevy faces off against the F-150 Lightning with its new electric truck. The high-end RST model will offer 664 horsepower and a 10,000-pound towing capacity.

The 2024 Chevrolet Silverado EV may be late to the electric-pickup party, but from our early look it appears to have been worth the wait. Rivian, Ford, GMC, and Tesla have set lofty expectations for range, power, and towing. To match them, the Silverado EV offers up to 400 miles of range, up to 664 horsepower, and up to 10,000 pounds’ worth of tow rating.

Two trim levels will be available to start. The prices Chevy is quoting—$105,000 for the fully loaded RST on display, and $39,900 for the base and fleet-oriented WT—don’t include destination, which is $1695 on the current non-electric Silverado. Chevy says these two prices represent the bookends of the Silverado EV pricing spectrum and that upcoming trim levels will fall between.

The Silverado EV is about the same length and height as a regular crew-cab, short-bed Silverado, but the only thing the two trucks share is part of their names. The Silverado EV isn’t even assembled in the same factory. Instead, it’s built on a narrower version of the GMC Hummer EV’s underpinnings. That means independent front and rear suspension, front and rear electric motors (although two of them, rather than the Hummer’s three), and an available 200.0-kWh battery pack with 400 miles of estimated range. 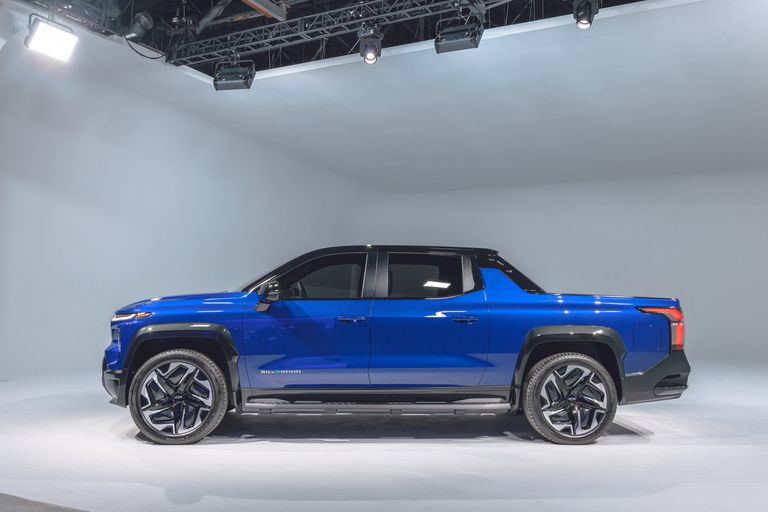 Also like the Hummer EV, the Silverado EV has an electrical architecture capable of charging at 800 volts and 350 kW that allows it to add 100 miles of range in just 10 minutes, according to Chevrolet. It’s worth noting that that substantial range figure is for the truck with 24-inch wheels, which are standard on the first available trim level, the RST. The WT has 18-inch wheels, and though Chevy says the WT will be available with 400 miles of range, it has not yet discussed the effect of those wheels on range estimates.

We also don’t know the range of the $39,900 WT, but we expect it to be like the lower trim levels of the Hummer EV, which GMC currently estimates will span from 250 to 300 miles.

While Chevy hasn’t said how much power the RST has in its regular mode, it shouldn’t be lower than the WT’s output. 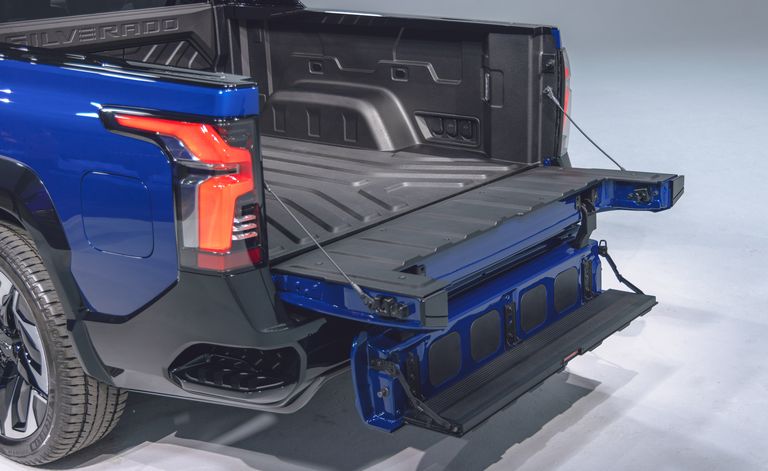 Remember the Avalanche and its nifty folding Midgate? It’s back in the Silverado EV, but Chevy swears that other than that, the new truck’s unmistakable likeness to the Avalanche is coincidental. Now called the MultiFlex Midgate, the wall separating the bed from the cab can be lowered in a 60/40 split to increase the effective bed length while leaving room for a rear passenger. Owners can also remove the rear glass and store it in the folding section, enlarging the opening further. Chevy says the Silverado EV’s tonneau cover provides weatherproofing, though we didn’t see it during the reveal.

The Silverado EV is also available with Chevy’s MultiFlex tailgate. Through various configurations, the tailgate can expand the effective bed length and act like a step. While the bed is 5.9 feet long in its normal configuration, dropping the midgate and setting the tailgate in its bed-extending setting grows the length to 10.8 inches. Need more storage? A front trunk can handle three large suitcases. 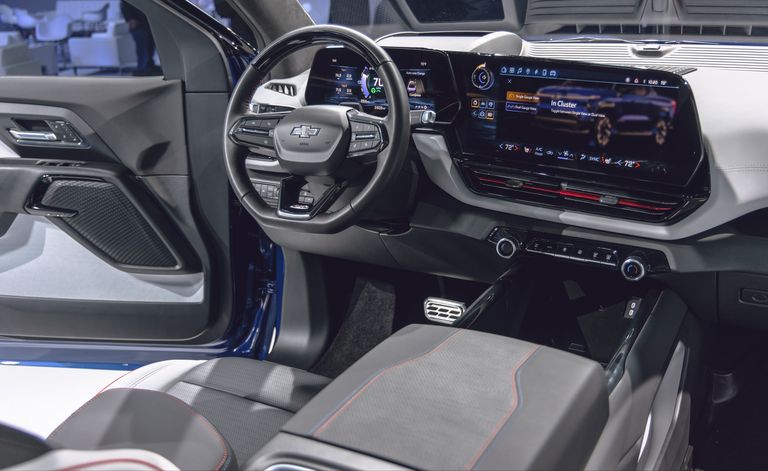 Peeking inside the RST reveals a racy-looking interior complete with a fixed glass roof and a red, white, and blue color scheme. The column-mounted shifter allows for extra storage space in the center console, which hosts plenty of USB outlets.

Also like the Hummer EV, both the WT and RST feature four-wheel steering, which improves low speed maneuverability and high-speed towing. The RST also has air springs that can raise or lower the truck by two inches. Unlike on GMC’s Hummer, there are no locking differentials or CrabWalk feature. You can expect more off-road equipment in a future variant.

Like the F-150 Lightning, the Silverado EV can supply power to other sources. It offers up to 10 sockets, including a 240-volt outlet in the bed, and can provide 10.2 kW for anything from camping equipment to your home to another electric vehicle, provided you have the right cable.

You can put a reservation in for the Silverado EV now, but production doesn’t start until the second quarter of 2023. The first batch will be WT trim-level trucks intended for fleet customers, while the fully optioned RST won’t be available until fall 2023.