Does your dog always seem to be napping? If so, that’s perfectly normal, as dogs spend nearly half of their day sleeping, thirty percent awake and lying around and about twenty percent of the time actually awake. Sleep in dogs accounts for twelve to fourteen hours out of each twenty four hour day.

The amount of sleep your dog needs will vary depending on his age, size and health as well as his breed and general level of activity. Senior dogs don’t have as much energy as younger dogs and can tire easily, so they need more rest. Puppies expend huge amounts of energy in short bursts exploring and playing, then sleep to make up for the action. These youngsters may sleep for as much as eighteen to twenty hours out of twenty four to get the recharge they need. 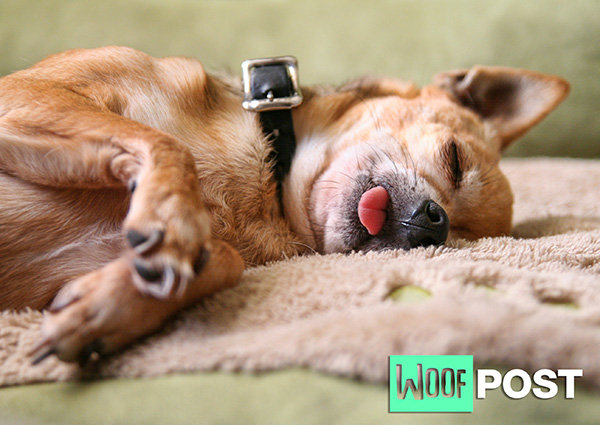 Certain dog breeds don’t sleep as much as others do. Larger breeds seem to need more sleep than smaller dogs. The working dogs were bred for a specific purpose and generally need to stay awake and pay attention to their task for the duration of the day. But even the working breeds, if not actively engaged in the task for which they were bred, can be caught catching a nap!

You may remember from biology class that humans have stages of sleep. Your dog’s sleep resembles our human pattern except for the amount of REM (rapid eye movement) sleep, which accounts for only ten percent of their total sleep time. Humans, on the other hand, spend about twenty-five percent of our time in REM.
One reason that dogs exhibit less REM sleep than humans is that they are very inconsistent with their sleeping schedule, so they need more total sleep than humans. Dogs fall asleep easily when bored but they also awaken easily and are almost immediately alert, so they don’t get as much REM sleep as humans do, with our long unbroken sleep period during the night.

Certain things can happen that can cause your dog to sleep more. For example, if you have just moved or the dog has lost a beloved companion, human or animal, her need for sleep and rest may increase. But if your routine has remained the same and your dog suddenly seems to be sleeping much more than usual, you should consult your veterinarian. Disorders such as hypothyroidism, diabetes and even canine depression can all be triggers for excessive sleeping.