Hollywood Flashback: ‘The Fast and the Furious’ Juggernaut Started in 2001

The franchise has spawned eight sequels and a spinoff that have grossed more than $6.15 billion to date, with the latest incarnation set for release June 25.

Twenty years ago, no one realized just how far living life “a quarter mile at a time” — as Vin Diesel’s character Dominic Toretto so poetically puts it — would take The Fast and the Furious. The scrappy crowd-pleaser starring Paul Walker as an undercover LAPD detective and Diesel as the leader of a group of street racers spawned eight sequels and a spinoff (the latest, F9, out June 25) that have grossed more than $6.15 billion to date.

“We didn’t know what the rules were and weren’t. We just kind of went off and did it,” recalls producer Neal H. Moritz, who notes the film’s $38 million budget was low enough to have the team left alone. “I’m sure they believed in the worst case scenario that it could be a direct-to-video release. There just wasn’t that pressure on the movie.”

Partly inspired by a 1998 Vibe article about illegal street racing in New York, Furious reunited Moritz with director Rob Cohen and Walker; the three had just worked together on Universal’s The Skulls. While Walker was a lock for Brian O’Conner, the role of Dominic originally was offered to Timothy Olyphant, who passed. Enter Diesel, an unknown actor with a small role in Saving Private Ryan under his belt. 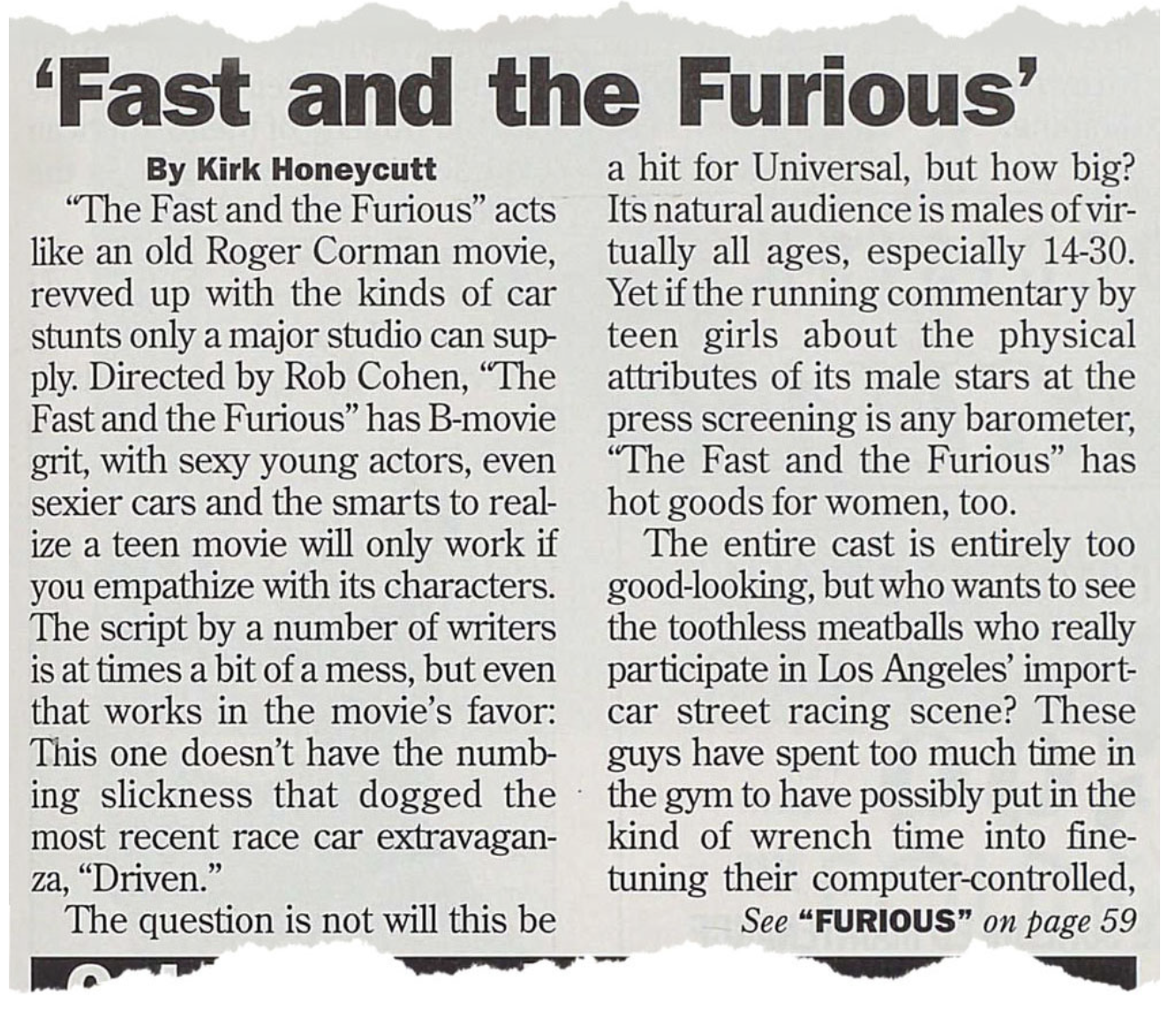 “I had seen some stuff Vin had done very early on and I was a big proponent of him,” recalls Moritz. “I pushed [then-chairperson] Stacey Snider and the execs at Universal.” Diesel was part of an inclusive cast decades before that became desirable in Hollywood, with stars including Michelle Rodriguez and Jordana Brewster. “If we were trying to be realistic, there was no other way we would have done it,” says Moritz of the casting. “It wasn’t a calculated thing.”

A movie about fast cars needed the right title. One night, a documentary about B-movie king Roger Corman gave Moritz the answer when the 1954 crime drama The Fast and the Furious popped on the screen. He approached Corman, who happily relinquished the rights. At an early test screening, “people went wild,” recalls Moritz. “We said, ‘My God, we’re on to something.’ “