This latest incarnation of the concert experience aims to take virtual events to new fantastical heights and features easter eggs for enthusiasts of the battle royale game and Grammy-winning artist.

The latest concert experience realizes Grande’s classic bubblegum feminine aesthetic through five inspired locations, along with customized outfits, items, an emote and even some Piggy Smallz back bling.

It’s a visual and concept design, according to Epic Games’ Head of Brand Phil Rampulla, that was executed by more than 100 people and initially conceived over several months before becoming an open door collaboration with Grande, someone Rampulla said was not only “top of mind” for the company’s next evolution of an immersive event, but whose team engaged in daily and weekly calls with Epic.

“One of the questions we always ask [of collaborators] at the very beginning is what is something that you’ve always wanted to do but couldn’t because of any limitations, whether it be gravity, seating or anything else. Whether they’re athletes, writers, musicians, directors or even stand-up comedians, we view our space as a place to do the impossible,” he told The Hollywood Reporter. “From there it’s kind of the sky’s the limit.” 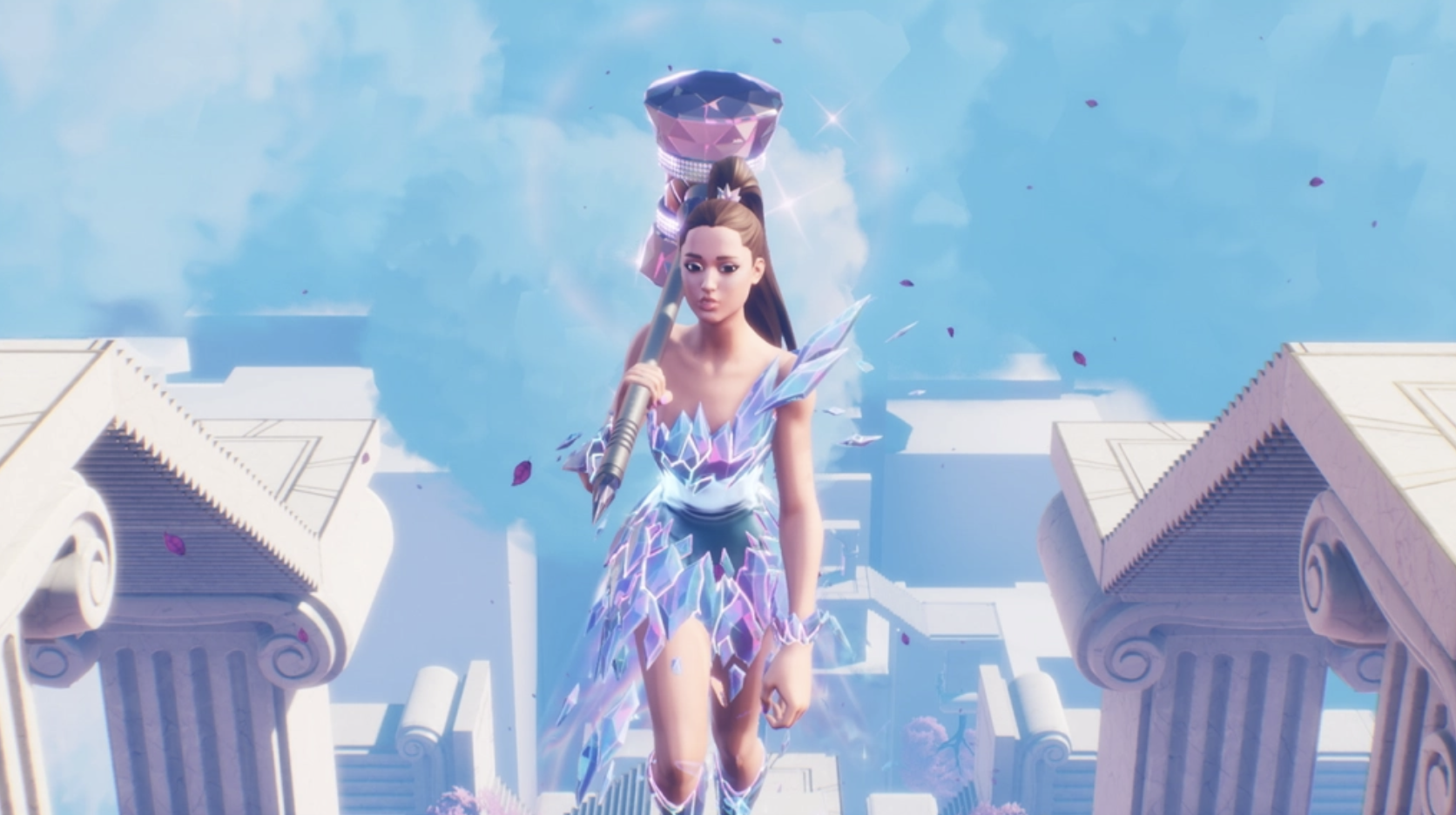 Yet, for this weekend’s Rift Tour event, even the sky doesn’t feel like a creative ceiling, with a giant, motion-captured manifestation of Grande literally shattering the heavens with her dazzling gem smasher. The pop artist’s vision invites players to navigate her specific brand of fantastical as she dips and twirls through virtual space. Rampulla praised both Grande and the Rift Tour’s team for their ability to “take the emotion of music and translate that into actual 3D spaces.”

“Especially the way she manifests in the world — the actual connection when she reaches out to you and you only, I think, is something special,” he said. “Not only was [the design] about things like Piggy Smallz but following [Ariana Grande’s] journey and going through a glass ceiling — everything about the overall experience was really derived from her vision of her music.”

Similar to Scott’s creatively distinctive “Astronomical” performance, Grande’s fans can choose to remain in place and, if they’ve purchased any emotes, show off their dance moves. But they can also opt to run, jump and float around on their own. At the very end, players can even get a ride from a tiny flying unicorn. 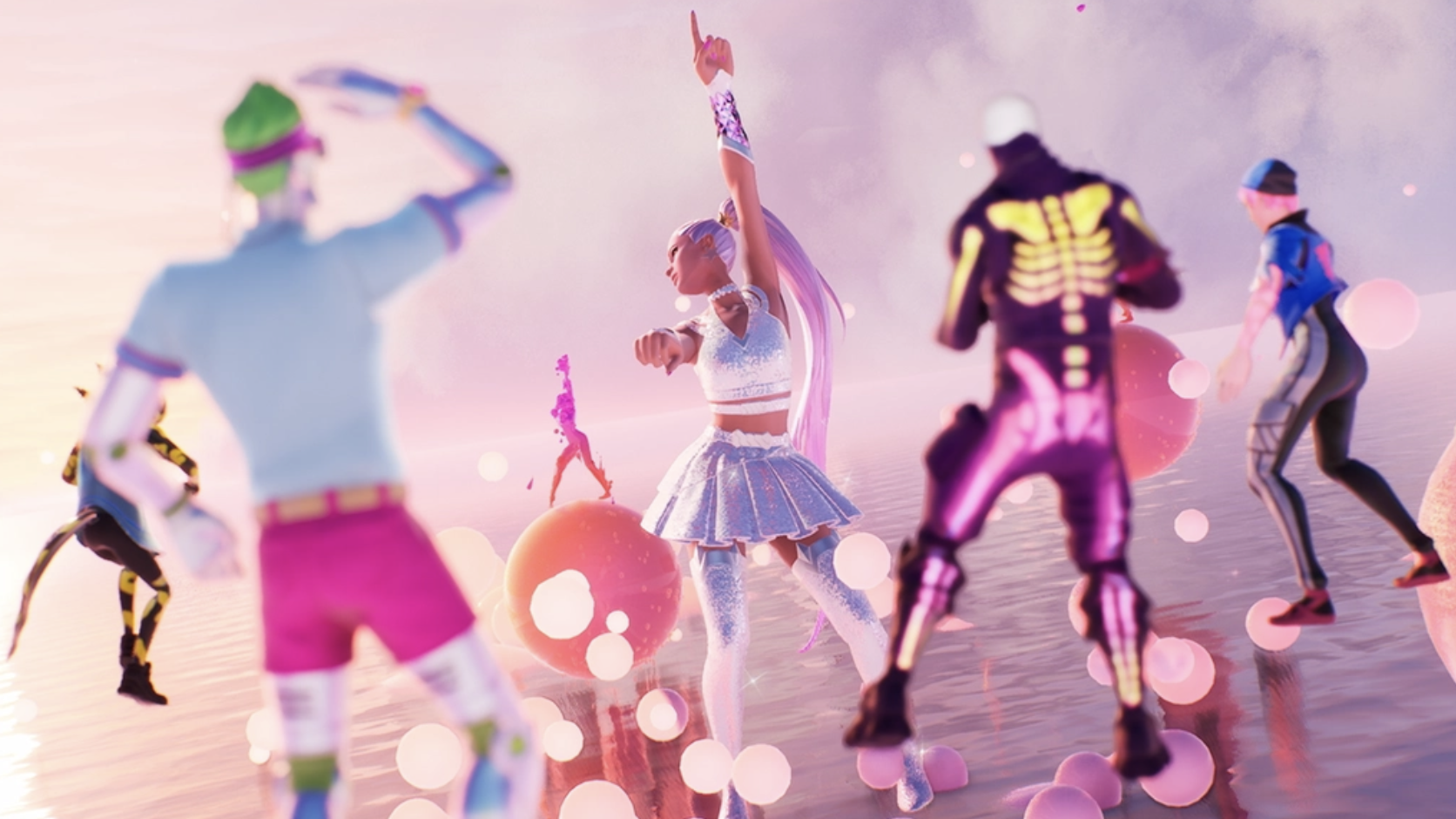 Much of what gamers see and do is dependent on the part of the setlist (which includes around one-minute clips of “7 Rings,” “Be Alright,” “R.E.M.,” “The Way” feat. Mac Miller and “Positions”) they are currently in. One location gives players the chance to navigate a Grande-styled rendering of M. C. Escher’s “Relativity,” while others let participants walk on water with the singer or chase her through a cloud of bubbles.

But in a new addition, the Rift Tour also caters to those who might be there for more than a visually immersive, mo-cap-driven concert. Ahead of the set, one can purchase Grande-inspired items like the Sweetener Sailshards Glider, the Ariana Grande outfit and goddess variant as well as the “7 Rings” Smasher Pickaxe and play across three locations.

Once players are sucked into the rift and receive a personal welcome to the tour, their character will have the chance to race through the colorful and splashy Wrap World before hopping on a biplane where they’ll take on the Storm King, the electrifying monster from the 2019 Fortnitemares event. 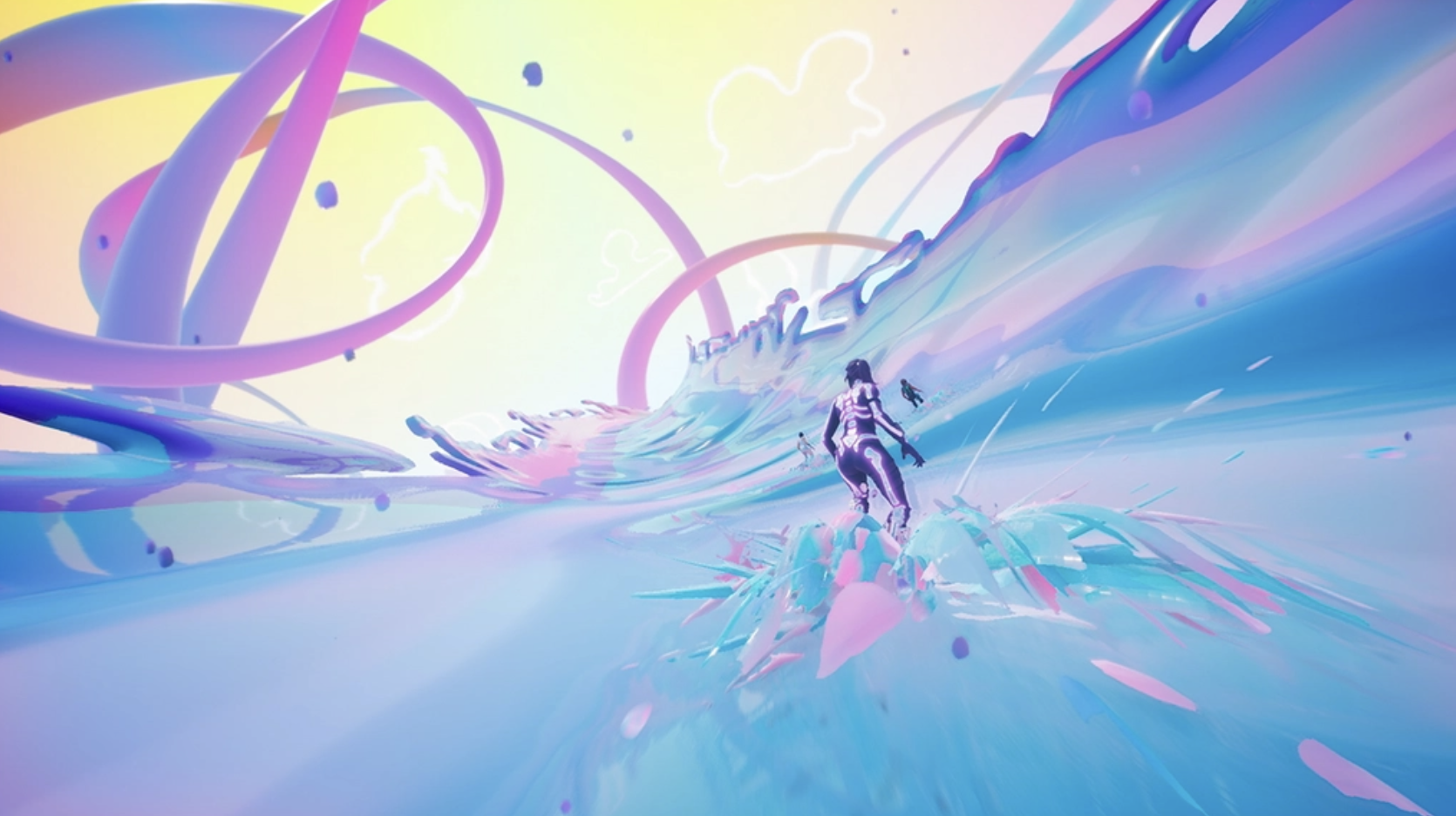 Rampulla says the gameplay sequences that were chosen (and set to their own non-Grande soundtrack) were among “a lot” of concepts drawn up by the team, some of which fans may see in future events. What ended up in the Rift Tour, however, was what the team thought was “really going to resonate” with attendees, and ultimately created a nice pacing within the larger show.

“They bring things together that are inspired from Fortnite but put them in totally different fantastical viewpoints and repackage them,” he said. “There’s a lot of nostalgia in some of those things — whether it be the paint runway that’s changing with the wraps or a whole planet dedicated to Cuddle Team Leader.”

Among the Rift Tour’s most notable Fortnite references is the revive sequence. While it calls on the in-game action of restoring another player’s health, it also draws on the community spirit of a large virtual gaming event. Being together, even if through a screen, has felt especially important during the past year, where the pandemic has made physically being with one another difficult.

“Some of it is just an homage and a thank you to folks who have graced our worlds, whether you’ve been here since day zero or you know just came in yesterday, to let them know that you’re welcome here in the world of Fortnite, especially with everything that we’ve gone through this past year as a planet,” Rampulla said of the sequence. 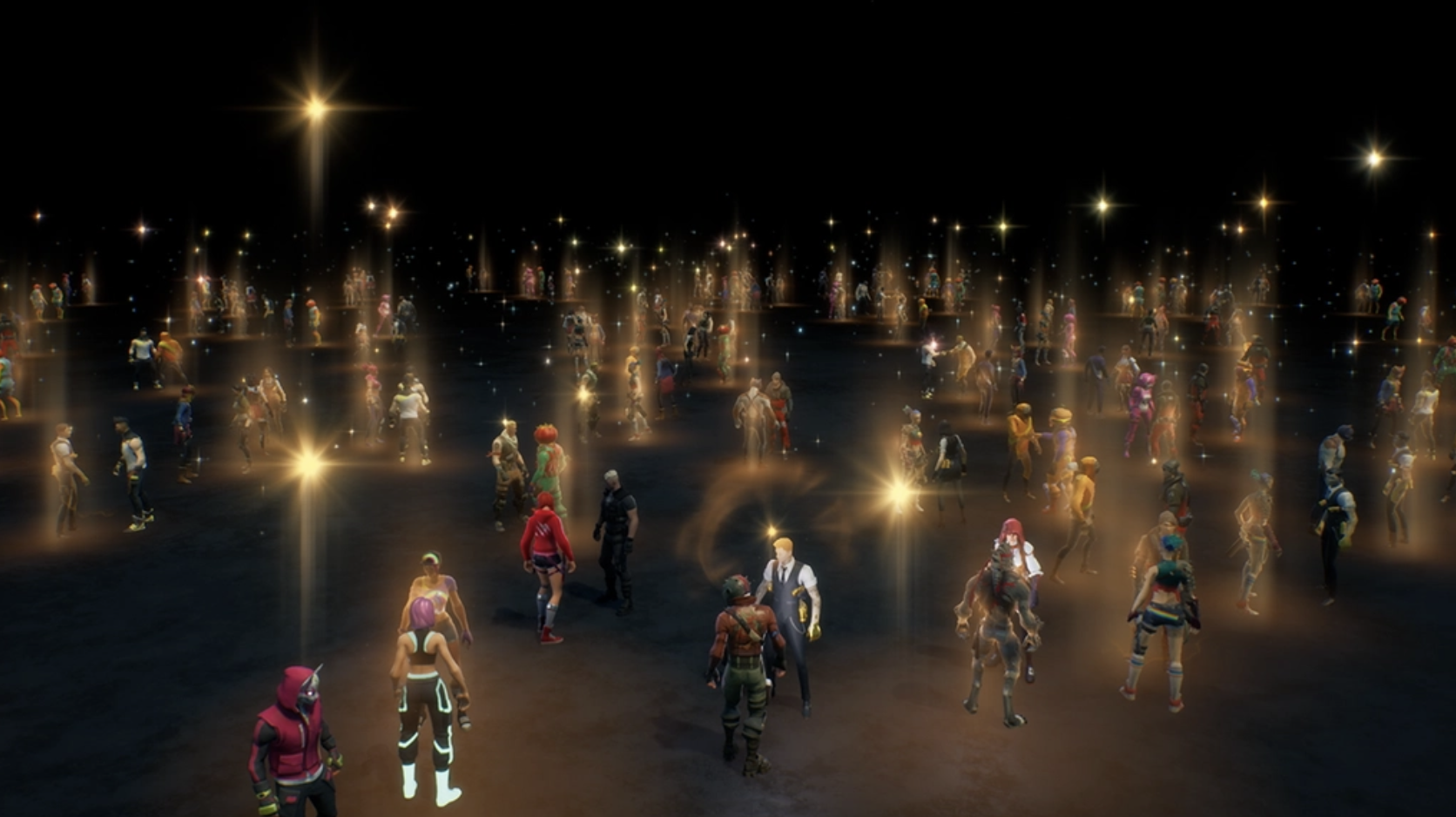 “I think the other part of it is just the social connection of this show, of being able to go with your friend, being able to be together with so many other people and make new friends, make new connections,” he continued. “Those are the things that we’re really trying to push for. We’re trying to enhance and replicate the human connection overall.”

As the Rift Tour subtly addresses the pandemic in-game, outside the event, the live concert industry is grappling with how to move forward in a world where vaccine accessibility is increasing alongside a rise in coronavirus variant cases. Epic Games’ virtual concert events may seem like a short-term answer, and possibly the future, for live events, but Rampulla says he doesn’t see these experiences — however “incredibly exciting” — replacing live performances. Instead, he envisions them as a compliment to artists’ exisitng arsenal.

“We want to be in that mix for sure, and deliver things that no other place can. We think of Fortnite as a place for the impossible, for sure,” he told THR. “But, you know, it’s an extension, an enhancement, an alternate experience in addition to all the things that [musicians] currently are doing. It’s ‘Yes, I’m going to go on a world tour and perform in all these cities, but I also have something in Fortnite that is totally unique and is an echo and reflection of the things I’m doing in the real world.’”

The first show of the Rift Tour has passed, but Ariana Grande and Fortnite fans can experience the virtual concert event four more times this weekend. Additional showtimes include Saturday, Aug. 7 at 2 p.m., and Sunday, Aug. 8 at 12 a.m., 10 a.m. and 6 p.m., all eastern time.

Fortnite is available on PlayStation 5, PlayStation 4, Xbox Series X|S, Xbox One, Nintendo Switch, Android, PC and Mac. After downloading Fortnite, it’s suggested that players arrive around an hour ahead of showtime to make sure they don’t miss their trip through the rift.