Health experts warn US is heading in wrong direction on coronavirus

The United States is in an “unnecessary predicament” of soaring COVID-19 cases fueled by unvaccinated Americans and the virulent delta variant, the nation’s top infectious diseases expert said Sunday.

At the same time, CNN Medical Analyst Dr. Jonathan Reiner, a professor of medicine and surgery at George Washington University, warned unvaccinated Americans not to go into bars and restaurants.

“What I would say bluntly is: If you are not vaccinated right now in the United States, you should not go into a bar, you should probably not eat at a restaurant. You are at great risk of becoming infected,” Reiner said. 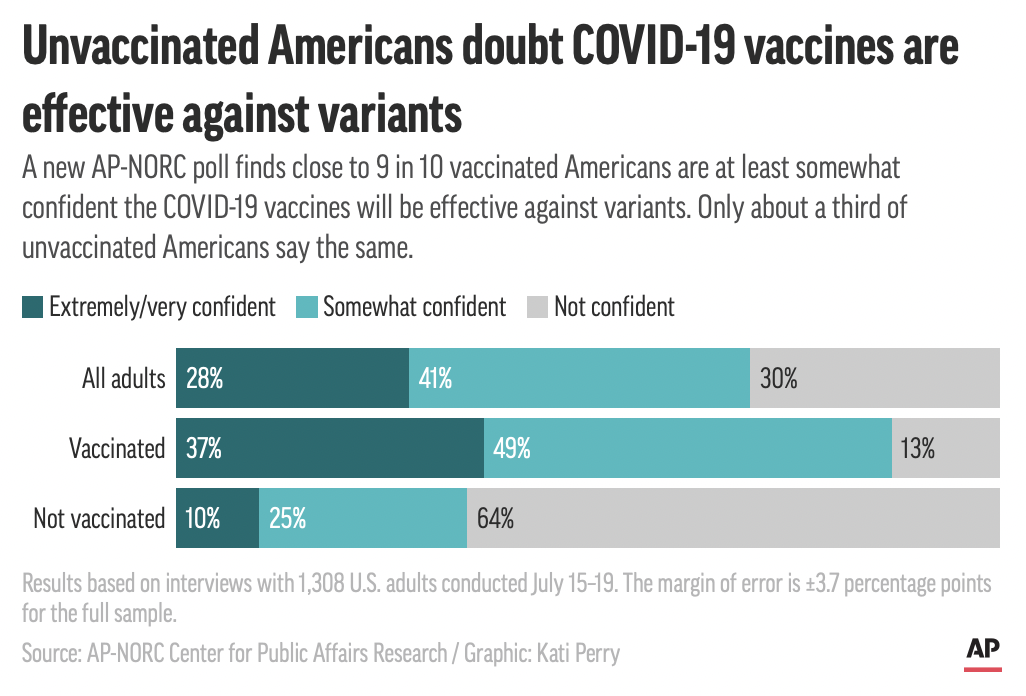 According to the Atlanta-based Centers for Disease Control and Prevention, only 49.1% of the U.S. is vaccinated against the coronavirus. More than 163 million people, or 49% of the total U.S. population, are fully vaccinated, according to CDC data. Of those eligible for the vaccine, ages 12 and over, the figure rises to 57%.

In 48 states, new COVID cases last week jumped by at least 10% compared with the week before, according to Johns Hopkins University. In 34 of those states, the rate of new cases increased by more than 50%, CNN reported.

Nationally, 56.4% of all Americans, including children, have received at least one dose of the vaccine, according to the CDC. And White House officials said Thursday that vaccinations are beginning to increase in some states where rates are lagging behind and COVID-19 cases are rising, including in Arkansas, Florida, Louisiana, Missouri and Nevada.

Still, just over 40% of Louisiana’s population has received at least one dose, and the state reported 5,388 new COVID-19 cases Wednesday — the third-highest single-day figure since the pandemic began. Hospitalizations also rose steeply in the last month.

Fauci said recommending the vaccinated wear masks is “under active consideration” by the government’s leading public health officials. Also, booster shots may be suggested for people with suppressed immune systems who have been vaccinated, Fauci said.

Last week, an Associated Press/NORC Center for Public Affairs Research poll showed most Americans who haven’t been vaccinated against COVID-19 are unlikely to get the shots and doubt they would work against the aggressive delta variant.

What’s more, 64% of unvaccinated Americans have little to no confidence the shots are effective against variants — including the delta variant that officials say is responsible for 83% of new cases in the U.S. — despite evidence that they offer strong protection. In contrast, 86% of those who have already been vaccinated have at least some confidence that the vaccines will work.

Fauci, who also serves as President Joe Biden’s chief medical adviser, told CNN’s “State of the Union” that he has taken part in conversations about altering the mask guidelines.

He noted that some local jurisdictions where infection rates are surging, such as Los Angeles County, are already calling on individuals to wear masks in indoor public spaces regardless of vaccination status. Fauci said those local rules are compatible with the CDC recommendation that the vaccinated do not need to wear masks in public.

Fauci said government experts are reviewing early data as they consider whether to recommend that vaccinated individuals get booster shots. He suggested that some of the most vulnerable, such as organ transplant and cancer patients, are “likely” to be recommended for booster shots.

He also praised Republicans, including Govs. Asa Hutchinson of Arkansas and Ron DeSantis of Florida, and the second-ranking House leader, Rep. Steve Scalise of Louisiana, for encouraging their constituents to get vaccinated. Their states have among the lowest vaccination rates in the country.

“What I would really like to see is more and more of the leaders in those areas that are not vaccinating to get out and speak out and encourage people to get vaccinated,” Fauci said.

In a televised town hall last week, Biden himself expressed frustration over the slowing COVID-19 vaccination rate in the U.S. and pleaded that it’s “gigantically important” for Americans to step up and get inoculated against the virus as it surges once again.

Biden said the public health crisis has turned largely into a plight of the unvaccinated as the spread of the delta variant has led to a surge in infections around the country.

“We have a pandemic for those who haven’t gotten the vaccination — it’s that basic, that simple,” he said.

The Associated Press contributed to this report.