by Will Stribling | MississippiToday.ORG

As Mississippi’s vaccination effort continues to limp forward, state health officials are warning of the massive threat the Delta variant of COVID-19 poses to the unvaccinated, and of a potential surge of infections set off by a strain that’s much more infectious and potentially deadlier than the original strain of the virus.

Missouri is certainly a cautionary tale for how the Delta variant could impact Mississippi’s recovery efforts. The variant now accounts for around 29% of total cases in Missouri, according to data from the U.S. Centers for Disease Control and Prevention. It also accounts for one in every five COVID-19 cases in the United States.

A wave of new infections has left Missouri with the highest infection rate in the country and is stressing the limits of the state’s hospital system. In Springfield alone, there has been a 225% increase in hospital admissions since June 1, according to the Springfield-Greene County Health Department.

With 650 confirmed cases, the Alpha variant of COVID-19, which originated in the United Kingdom, still represents nearly 86% of all variant infections in Mississippi. There are currently 29 confirmed Delta infections in Mississippi, but this number nearly tripled in the 10-day period between June 14-24. Hinds County is the current hotbed for the Delta variant, where 18 of the 29 confirmed cases have been identified.

The vaccines are nearly as effective against the Delta variant as the original strain, greatly minimizing the chance of infection and nearly eliminating the risks of developing a serious illness.

Dobbs has repeatedly stressed that Mississippians have the choice of getting vaccinated or contracting COVID-19, and that in every scenario a vaccinated person is going to have a better outcome than if they had declined the shot.

The data collected on infections and deaths over the last few months has made this argument irrefutable. The Associated Press reported that nearly all COVID deaths in the U.S. are among the unvaccinated. Of the more than 18,000 COVID-19 deaths that occurred in May, only around 150, or 0.8% were from fully vaccinated people.

Despite the wide availability of vaccines and the risks posed by variants, Mississippi continues to rank last in the nation in the share of its population that has been vaccinated.

Only 32% of Mississippians have been fully vaccinated despite significant gains made in recent months in vaccinating the most vulnerable and making vaccine access moreequitable. People are simply declining to get their shots, and this is keeping Mississippi in last place.

“We’ve been through the worst pandemic in over a century. We’ve lost over 600,000 Americans. It’s now the third leading cause of death in this country,” Dobbs said during a press conference last Wednesday. “We now have an exit door. Too many of us are choosing not to use that door. When we don’t all use it together, and in a sufficient number … it keeps us all vulnerable.” 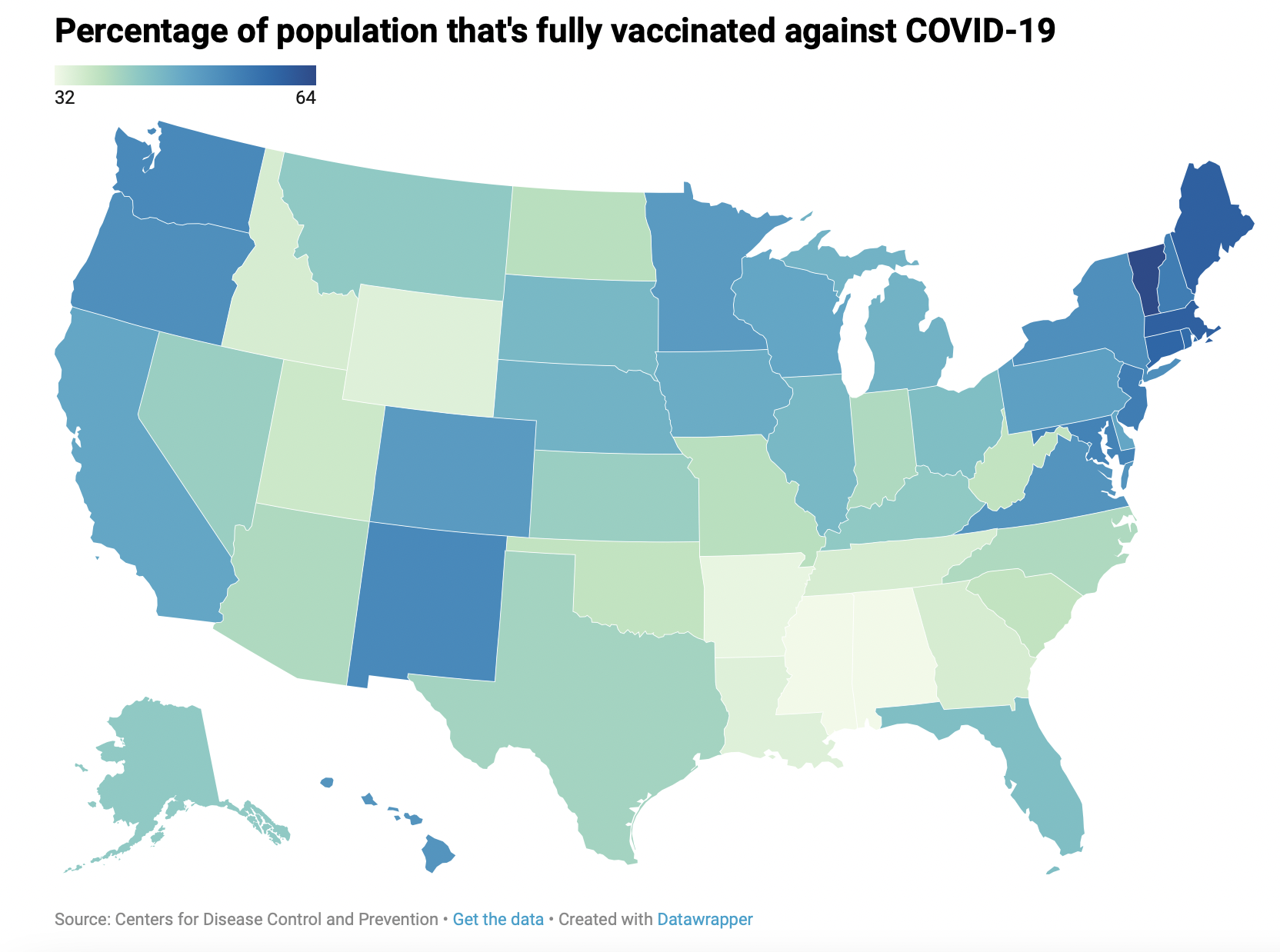 We’re already seeing the danger vaccine resistance poses to the most vulnerable populations, with even some working in healthcare settings refusing to get vaccinated.

“We’ve seen outbreaks where symptomatic staff members have brought (COVID-19) into nursing homes,” Dobbs said. “This is something that just can’t be OK.”

The significant protections already known to come from COVID-19 vaccines received another credibility boost on Monday, as a new report found that the Pfizer and Moderna vaccines initiate a persistent reaction in the immune system that may protect the body against the virus for years.

“It’s a good sign for how durable our immunity is from this vaccine,” Dr. Ali Ellebedy, an immunologist at Washington University, who led the study, told The New York Times.

The study did not examine the immune response prompted by the Johnson & Johnson vaccine, and researchers said they expected it to be less durable than the protections provided by mRNA vaccines. Still, the results of the study suggest that those who received one of the two mRNA vaccines may not need booster shots later in the year, as many had expected, so long as significant mutations in the virus and variants do not occur.

Last week, the CDC said that there is no data that currently supports recommending booster shots. To recommend them, the center would require “evidence of declining protection against illness, such as declines in vaccine effectiveness” or detection of a “variant of concern substantially impacting vaccine protection.”

People who recovered from COVID-19 before being vaccinated may not need boosters even if the virus does make a significant transformation. But whether or not boosters will be needed for more vulnerable populations with suppressed immune systems is yet to be seen, and the landscape will certainly continue to change as the virus continues to evolve.