By Rich Barak, The Atlanta Journal-Constitution

A federal court has voted to stay a judge’s decision ruling that the Centers for Disease Control and Prevention cannot enforce COVID-19 cruise ship rules after July 18, according to POLITICO reporter Josh Gerstein.

The Circuit Court of the 11th District voted 2-1 in a win for the CDC in its fight with Florida Gov. Ron DeSantis and the state. The state had sued the CDC, claiming the agency’s restrictions on the cruise industry during the pandemic effectively blocked most cruises and harmed the state’s livelihood.

Earlier in July, the CDC asked a federal appeals court to put U.S. District Judge Steven Merryday’s June 18 ruling on hold after he ruled in favor of Florida. 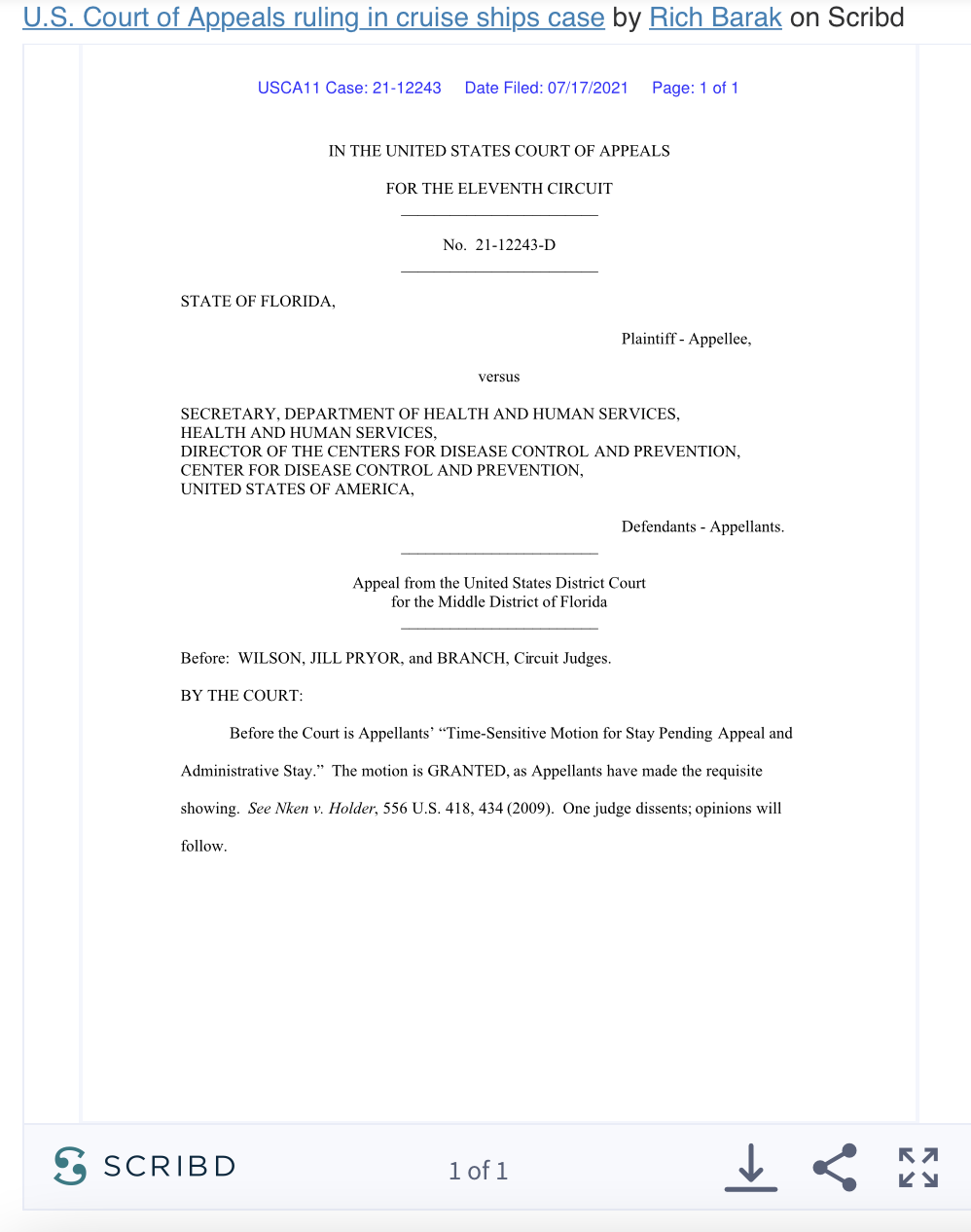 The Court of Appeals for the 11th Circuit has not issued its opinions yet but noted one judge dissented in granting the stay.

In March 2020, the CDC stopped cruise ships from sailing in response to the coronavirus pandemic, which affected passengers and crew on many ships.

Merryday, a Tampa-based judge, granted a preliminary injunction that prevented the CDC from enforcing the order pending further legal action on a broader Florida lawsuit.

“This order finds that Florida is highly likely to prevail on the merits of the claim that CDC’s conditional sailing order and the implementing orders exceed the authority delegated to the CDC,” Merryday wrote.

Merryday’s decision had meant the CDC could not enforce those rules for Florida-based ships and that they would be considered nonbinding recommendations or guidelines, according to reports.

The CDC imposed a four-phase conditional framework on Oct. 30 that would allow the cruise industry to gradually resume operations if certain thresholds were met.

Cruise lines including Royal Caribbean have been gearing up to return to sailing under the agency’s four-part framework.

Norwegian Cruise Line Holdings recently sued the state of Florida in a bid to end its ban on vaccine passports.

The company said the ban violates federal law and contradicts rules set out by the CDC, The New York Times reported.

The cruise industry was devastated by the pandemic, with ridership falling 80% last year compared with 2019. The three major cruise companies — Carnival Corp., Royal Caribbean and Norwegian — have lost a combined $900 million each month since March 2020, according to a recent report by Moody’s, the credit rating firm.