The Brentwood residence, built in the 1930s for opera singer and actress Grace Moore, was also once owned by Tyrone Power.

Pioneering Black architect Paul R. Williams — a favorite of Golden Age Hollywood elite and other assorted jetsetters — designed this stately 1930s manor for opera singer-actress Grace Moore and her husband, Spanish actor Valentín Parera. But the couple ultimately became disenchanted with Hollywood, fled the city and never actually lived in the Brentwood house — legendary actor Tyrone Power and his French wife Annabella were its first occupants, having bought the place soon after it was built, according to the Paul R. Williams Project. This is one of two Williams-designed houses owned by Power; the actor apparently loved the Brentwood digs so much that he commissioned the architect to design him a custom Bel Air residence in the late 1940s.

This property was eventually sold to a non-famous family, who held onto the place for decades. In recent years, the Georgian Colonial Revival mansion was leased out to Michael S. Smith, Barack Obama’s White House decorator, and his husband James Costos, the former U.S. Ambassador to Spain and Andorra. And this June, records reveal the estate was finally sold for $10.1 million to veteran CAA agent Josh Lieberman and his wife Maryam.

Sited just a quick skip north of Sunset Boulevard, the elegant house rests on a sprawling one-acre parcel behind hedges and gates. While it is perfectly livable, it could assuredly use some sensitive upgrades — the vast lawn is patchy, there’s no pool and the gardens are looking a bit unkempt. Inside, there are seven bedrooms and 6.5 baths in about 5,500 square feet of living space, including a detached two-bedroom guesthouse. David Offer of Berkshire Hathaway HomeServices California Properties handled both sides of the transaction..

A fountain serves as the focal point of a spacious motor court, with a columned portico entrance leading the way to tall double front doors. A wallpapered foyer offers a delicately curved staircase; steps descend to a light-filled living room with original French doors and a large bay window. There’s also a formal chandelier-topped dining room, handsome wood-paneled study with built-in bookshelves and a fireplace, and an oval bar encased in leopard-print wallpaper.

The main level also holds an all-white kitchen boasting updated stainless-steel appliances and a breakfast nook, plus a glass-enclosed lanai that spills out onto a spacious patio ideal for lounging and al fresco dining.

The upstairs contains four ensuite bedrooms, including a sumptuous master retreat with a sitting area, fireplace, large private terrace and dual walk-in closets. Glass doors open onto a covered terrace that takes in city-to-ocean views, while the marble-clad bath is outfitted with a relaxing soaking tub. A two-room suite for staff also can be found on the main level.

The star of the show: the magnificent park-like grounds, complete with a rolling, grassy lawn dotted with mature trees, multiple outdoor spaces, gardens and meandering pathways. There’s also more than enough space for a pool.

Around the same time that the Liebermans finalized the Brentwood purchase, they were also in the process of listing their custom mansion in the mountains above Beverly Hills, now up for grabs for $16 million. Originally built in 1952, the home has since been completely overhauled. 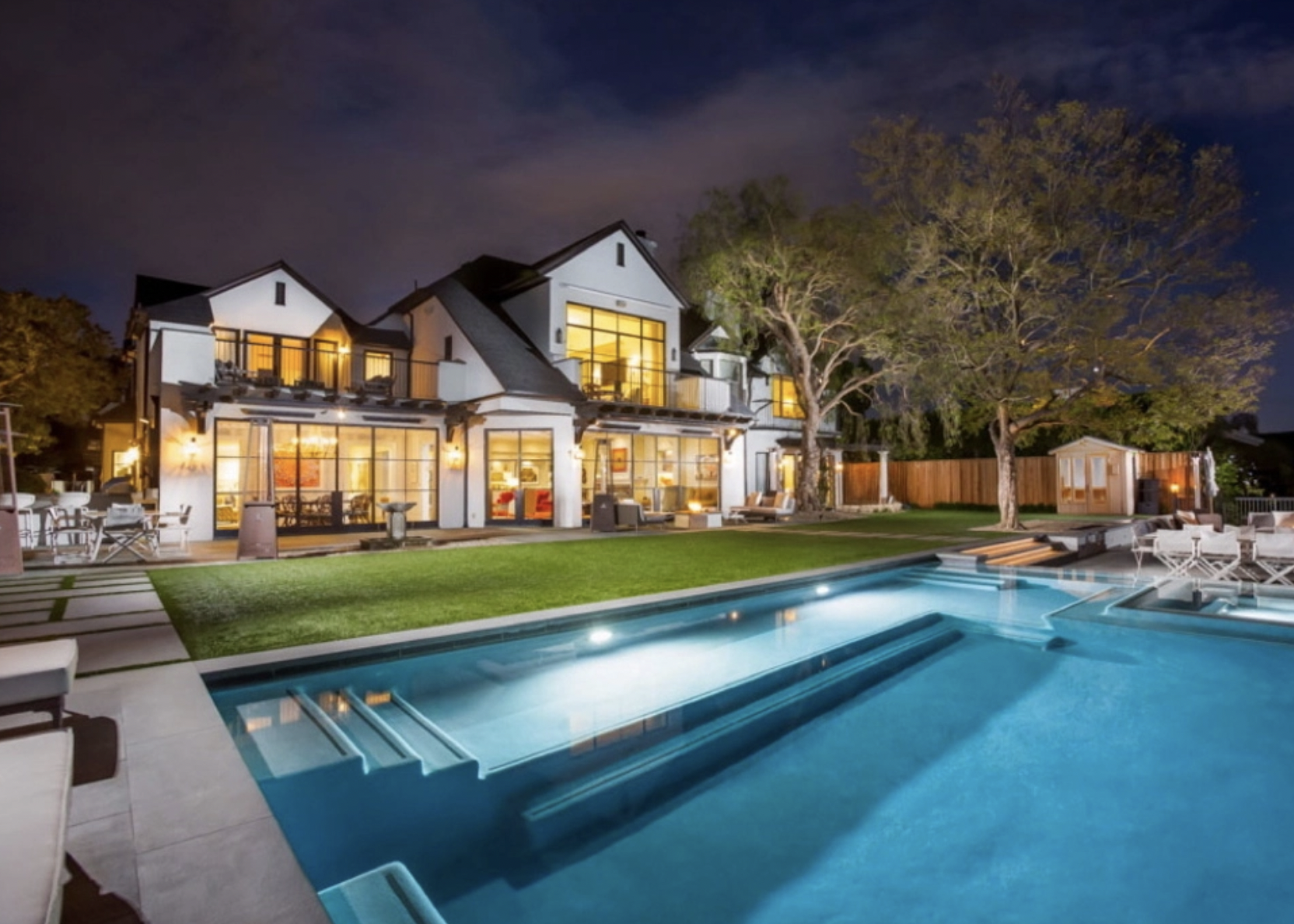 Among the highlights of the stylish seven-bedroom, 7.5-bath digs: a grand living room clad in 150-year-old reclaimed wood floors, an eat-in Poliform kitchen outfitted with Wolf and Sub-Zero appliances, and a two-story library and loft with a stenciled and beamed cathedral ceiling.

Amenities range from a gym, spa and six-person sauna to a 1,000-bottle wine room, custom bar and media room.

The Liebermans’ Beverly Hills home is listed by Ginger Glass of Compass and Martha Smith of Keller Williams Beverly Hills.