Founded by Nicole Winnaman and Abra Potkin, the soon-to-launch platform is designed to let stars and influencers seamlessly sell products through their social feeds.

Alex Rodriguez is an initial major investor. Stars like Dolly Parton and companies such as Bron Studios (behind such films as Joker, Respect and Candyman) see it as a promising new way to monetize content. They are among the names who have lined up behind the upcoming launch of NOWwith, a startup that’s set to enter the growing space known as social commerce next month.

Social commerce, a part of ecommerce, is a catch-all term for the buying and selling of goods in online social networks that includes everything from Facebook Shops and Instagram’s Drops section to live-stream selling sites like talkshoplive. Where NOWwith is aiming to succeed is with creating a seamlessly integrated backend platform that allows everyone from stars and influencers to entertainment companies to become retailers and to sell products across all of their social feeds. The company has built platform-specific integrations that allow the user to seamlessly shop social video without interrupting the experience. The integrations will be unique to each platform and do not always necessitate a redirect. In effect, talent can create their own personal marketplaces.

NOWwith’s founders and co-CEOs are Nicole Winnaman, founder of the branding and licensing company Winnaman & Associates, and Abra Potkin, former vp talent and strategy at Verizon Media with a background in development at ABC and CBS. As they see the current retail landscape, many shoppers may be tired of scrolling through Amazon or the websites of department stores and other retailers to find products. By contrast, they believe that consumers are increasingly inspired by what they see being worn or used by people they follow on social. But there’s often no easy way to purchase it.

“We saw that with the Oprah Winfrey interview — that those chairs sold out that Meghan and Harry were sitting on. People wanted in on it. They wanted to connect,” says Potkin. “Nicole and I joined forces because we both believed that there would be a way to innovate and create experiences [around] the people who inspire you. They could share the things that inspire them and you would be able to then seamlessly connect with it, aka shop it, and not have to go hunt down that Sex in the City dress or not have to go hunt down Rachael Ray’s cheese grater.”

Winnaman also referenced Winfrey, as well as entrepreneur Gwyneth Paltrow, in talking about the idea behind NOWwith. “When Oprah shared her favorite things, everybody paid attention. It’s the curation of people you love sharing the things that they love. We really wanted to build a platform where we could enable any influencer to create their own Goop, to be able to share their favorite things and really build a business out of it.”

Chimes in Potkin, “You know, the world is filled with 10 million Oprahs now. And being able to empower them and ignite marketplaces for them so that they can connect and share is super exciting for Nicole and I.”

On NOWwith, which operates under a revenue-share model with talent, people will be able to buy directly from videos, which can include an embedded carousel that displays items. Stars and creators who create content with the NOWwith video-creation toolkit could choose to promote and sell brands they own or have endorsement deals with, but creators could also simply spotlight products they love and get a percentage of sales. Says Parton, one of a number of stars who plan to use the platform, “Now with all the advances in technology that have happened in my lifetime, it’s like going from the Stone Age to the Space Age. NOWwith is set to take us all to the next level and I want to make sure I’m one of the first in line.” 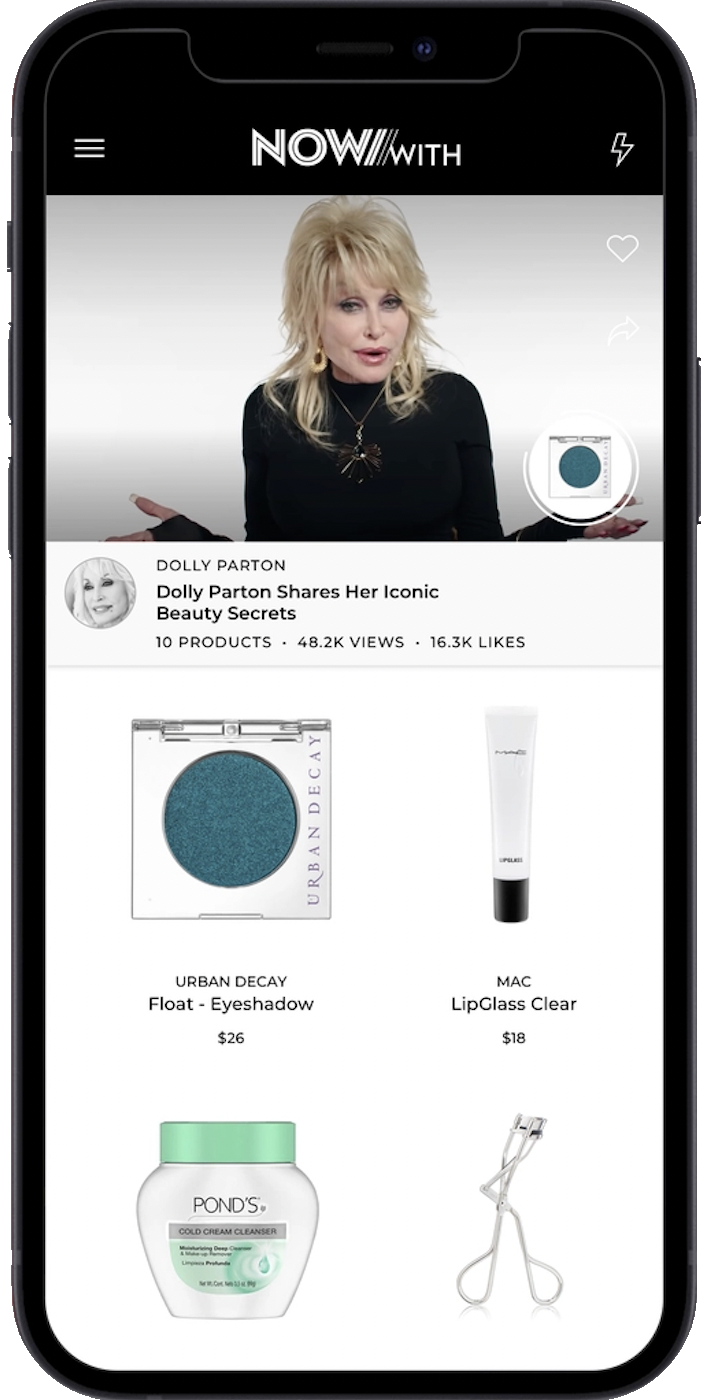 Aaron Gilbert, the CEO of Bron, which is also an investor, says: “We see how the convergence of content and commerce can help fans connect even deeper to the content they love, which is why we were one of the earliest investors in NOWwith. NOWwith enables viewers to truly immerse themselves into their favorite worlds onscreen by shopping while they watch. BRON and affiliate companies will be integrating custom clothing and makeup lines into our new content that fans can seamlessly buy through NOWwith.”

Winnaman says that the startup has to date raised $18 million, with a team of investors who include former Twitter CEO Dick Costolo, DAZN Group chairman Kevin Mayer, Honey president Joanne Bradford and Greycroft’s Dana Settle, plus Rodriguez, who invested with entrepreneur Marc Lore (the founder of Jet.com and the former head of ecommerce at Walmart U.S.) through their venture firm VCP.

Rodriguez, in an interview with The Hollywood Reporter, says that he and Lore believe that NOWwith “could be a very significant business. They have the vision and we can provide the capital and help them out with putting the right people on the team. There are all these influencers out there and celebrities that have this incredible opportunity to connect directly with the consumer. And NOWwith gives you an opportunity to do that in real-time.”

Rodriguez — who joined Anheuser-Busch last year as chairman and co-owner of Presidente beer and has a stake in the coffee brand Super Coffee — says he plans to be a user of NOWwith. “Whether we use Presidente or another one of our companies, we’re really excited to activate it.” And he echoed what Winnaman and Potkin said about how people shop today. “A lot of things that I pick up are through inspiration, whether it’s health or wellness or fashion,” says Rodriguez. “But sometimes you see it and there’s a layer that prevents you from buying. So everything we’re trying to do with NOWwith is to make a customer experience that’s one click and really easy to use. Simplicity is king, right?”

Adds Lore, who recently talked up NOWwith on CNBC’s Squawk Box, “We think we’re getting into the early stage of a mega trend. We really like the market. We really like the timing. We really loved Abra and Nicole’s background. And they are smart, optimistic, tenacious and adaptable. We felt like we could infuse the company with enough capital to go and help them raise a really big round and hire other executives. I think it could be a really formidable startup in the social commerce space.”

Ostrow stresses that the ability to capture data and share it with stars and their teams will be an important selling point of NOWwith, especially if talent is looking to start their own brand. “Let’s say Sue Smith posts content around gardening to her social feeds. She could ask her audience to buy a trowel or gardening gloves using NOWwith. Based on that share, she’ll see if she can actually convert in the category before her team goes out, raises capital, and builds a business around gardening for her. We can see whether consumers actually show up with their wallets or if they just like and comment. Because once a talent launches a company, if it fails, they don’t have the ability to launch another one.” Adds Winnaman, “There is a lot of guessing going on with brands when they align with big talent for deals. [With NOWwith], agencies can collect data that they haven’t had access to.”

Agrees entertainment attorney Kevin Yorn of Morris Yorn Barnes Levin, “NOWwith is going to change the landscape when it comes to developing talent businesses. Talent can earn money while they beta test which products their followers are interested in purchasing from them. This data, which doesn’t currently exist, will enable us better strategize opportunities for our clients, negotiate better deals, and build more substantial businesses.”