It took seven years, but the Ferrari’s 2.0-second rip to 60 mph has finally dethroned the Porsche 918 Spyder as the king of acceleration.

We tested a 2021 Ferrari SF90 Stradale at Indianapolis Motor Speedway and it rocketed to 60 mph in 2.0 seconds and eviscerated the quarter-mile in 9.5 seconds at 148 mph.

All champions eventually meet their makers. The Porsche 918 Spyder set an otherworldly 60-mph acceleration time of 2.1 seconds in May of 2014—a record that hasn’t been broken for seven years and two months. We’ve tested over 1000 vehicles since, and yet not a single vehicle has been able to breach its brutal acceleration time. Until now. The 2021 Ferrari SF90 Stradale is here to show you that there’s quick, and then there’s hold my Barolo and watch this.

The Ferrari features a similar plug-in-hybrid powertrain as the 918, but where the Porsche relied on a single electric motor to drive the front wheels, the SF90 utilizes two 133-hp motors on the front axle. But that’s not all. Wedged between the manic 769-hp twin-turbo V-8 and the eight-speed dual-clutch automatic gearbox is another 201-hp electric motor. The components work together to provide a goosebump-inducing 986 horsepower. Yes, that’s nine hundred eighty six.

Launching the SF90 could not be easier: Engage Qualifying mode with the press of the haptic button on the F1-inspired steering wheel, set the transmission to manual mode and activate PS with the center-console toggles. With the slightest amount of brake pressure and the throttle pressed against the firewall, the engine readies itself with a 3500 rpm gurgle. Release the brake and hold on tight. 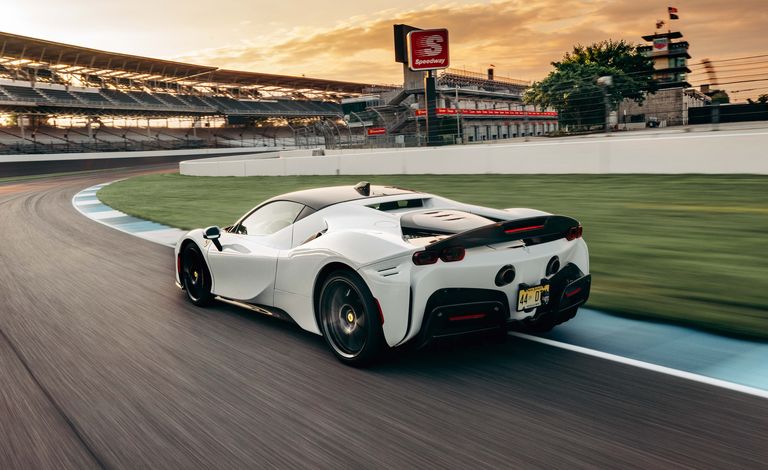 We expected a violent hit off the line, but the SF90’s departure is rather leisurely as the battery unloads itself into the electric motors before the glorious V-8 joins the party. You won’t be able to count to one Mississippi before 30 mph arrives in 0.9 second. Two Mississippi–60 mph is gone followed by a hint of wheelspin as the dual-clutch blinks a two-three shift. Stay in it and the quarter-mile shows itself in 9.5 seconds at 148 mph, 0.2 second and 3 mph quicker than the 918 Spyder. Though the SF90 Stradale sits atop the 60-mph throne, the quarter-mile crown belongs to the Bugatti Chiron Sport’s 9.4-second sprint at an insane 158 mph.

To the Tesla fans who have made it this far without scrolling to the comments to inform us how the Model S Plaid is better, listen up. In the time it takes the Tesla to ready its powertrain and squat the chassis in preparation for launch, the SF90 Stradale has completed the quarter mile, silently cruised back to the pits on electric power, and its pilot has brewed the finest of espresso. Until we test a Plaid, the Ferrari is the king.

Earning a top spot on the podium doesn’t come cheap. The SF90 Stradale starts at $511,250 and our tester’s $193,679 in options—including the lightweight Assetto Fiorano package—ran that price up to $704,929. But remember this: The 918 Spyder started well over $800K and a Bugatti Chiron Sport commands over $3 million. Ferrari’s SF90 Stradale is more than just a straight-line animal and we’ll be reporting on the rest of its greatness in the days to come.