Caddy’s last V-8-powered V car is so good, fans will demand a follow-up before the performance subbrand goes electric.

It’s a bittersweet symphony. Hearing the supercharged small-block’s raunchy and bellowing soundtrack reverberate against pit wall is as thrilling as it is sad. Every pass reminds us that the Cadillac CT5-V Blackwing will be the 18-year-old subbrand’s last go at a gas-powered performance sedan. At least Cadillac saved the best for last—the new CT4-V Blackwing is just as wonderful—as the CT5-V Blackwing will be remembered as one of best sports sedans ever made, period.

Before you accuse us of getting carried away, consider that the Blackwing’s segment, one that used to be filled with high-revving V-8s and V-10s and plenty of manual transmissions, has changed into something entirely different. When the first-gen CTS-V arrived for the 2004 model year, the competitive set featured rear-drive BMWs and Mercedes-Benzes, naturally aspirated engines were the norm, and Jaguar still built super sedans. Lexus hadn’t given an F yet, and that’s pretty much still true. Audis predicted the turbo and all-wheel-drive future, and it’s a recipe the segment now follows, except for Cadillac. Instead of following the crowd, Cadillac doubled down on rear drive, the manual gearbox, and sports-car dynamics.

Investment and constant improvement has brought us to the point that the automatic transmission is now the performance option, and the CT5-V Blackwing is no different. Cadillac’s 10-speed automatic carries a $2275 option price, but the real cost (apart from atrophy of your left leg and your car-loving soul) is $1875 because the auto carries a gas-guzzler tax of $1700 to the manual’s $2100 tariff. Faster around a track and in a straight line, sprints to 60 mph will take less than 4.0 seconds with a few tenths advantage going to the automatic. From just above idle to its 6500-rpm redline, the engine delivers big, supercharged smacks of instant power in a way that will make you forget about electric motors. 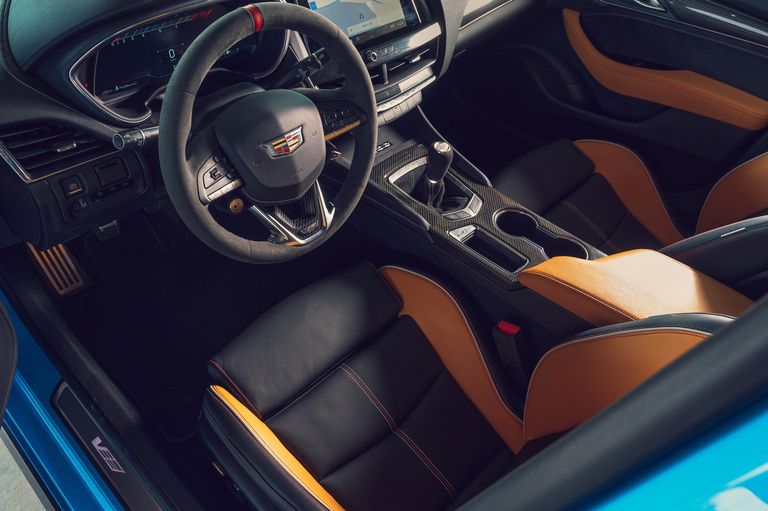 While the automatic can be considered a performance option, the manual is what you really want. Shifts are positive and mechanical, and Cadillac gives three-pedal buyers more goodies, including a no-lift feature that allows you to safely keep your right foot buried as you upshift and automatic rev matching on downshifts for those of you who have yet to master the heel-and-toe downshift. Purists can turn off rev matching if they are put off when a car does something that they enjoy doing.

At 4150 pounds, the big Blackwing is just that: big. In fact, we haven’t driven a car this large with a manual in some time. It’s as about the size of a short-wheelbase BMW 7-series from the 1990s. Fond memories of youth return, including remembrances of the rad dads in the ’80s and ’90s who would rip through the gears of a manual-transmission sports sedan on the way to school. 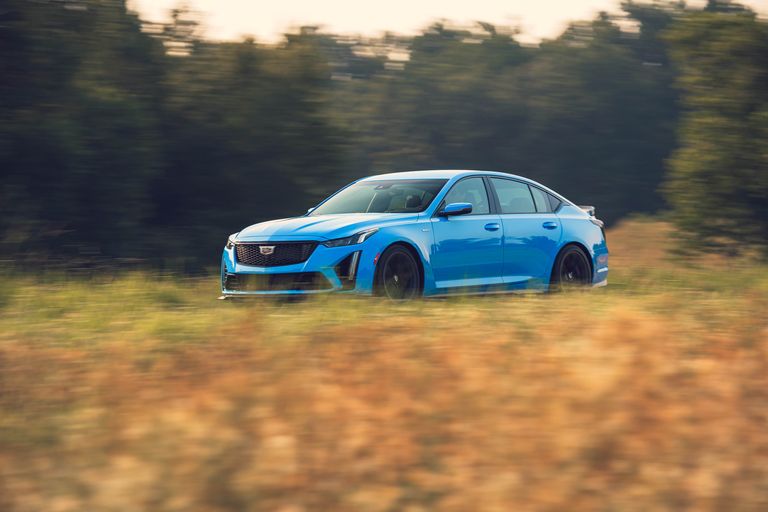 Part of the big Blackwing’s magic is that it acts like a smaller car. Body motions are kept in close check, the front-to-rear balance doesn’t overly stress the front or the rear end in cornering, and every component is tuned to hide the effects of the mass from the driver. Understeer is resisted to the point that the chassis is daringly neutral, but meter in even a whiff too much power and the tail will step out in a controllable manner. Both the steering and brakes are electrically assisted, but you’d ever know from the natural efforts and I-can’t-believe-it’s-not-analog feedback.

While you may be stuck choosing between a manual or an automatic, the rest of the car demands no such commitment. General Motors’s latest magnetorheological dampers can read and react to inputs 1000 times a second and are smart enough to automatically change the ride as the task demands. Leave the suspension alone, it’s clever enough to provide ride comfort appropriate for taking grandma to get her hair done. Should you want to give grandma helmet head, it’ll do that too. A five-step variable exhaust system takes the 668-hp V-8’s operatic voice from pianissimo to fortissimo and everything between. Mercedes’s engineers will envy the Blackwing’s ride quality, while the ones at Porsche will be in awe at how engaging the car is to drive.

There are additional settings to modify the steering, powertrain, and suspension. Cycle between Tour, Snow, Sport, and Track and you’ll notice a change in ride quality, steering heft, and transmission aggression. There are also two driver-configurable modes to store your secret sauce, but we found that Tour worked well on the roads between Raleigh, North Carolina, and Virginia International Raceway—proving that great chassis engineers know a great setup. Giving owners the ability to tailor settings is one place where Cadillac followed the competition, but it didn’t need to. It’s just as possible that a million monkeys with typewriters will eventually write Shakespeare as it is that an owner will find something better than the settings created by GM chassis engineers.

To keep owners from screwing up on track, Cadillac offers Performance Traction Management. These additional settings for the traction and stability control systems gradually remove the electronic safety net that keeps your talent, or lack of, in check. A Ferrari-like toggle on the steering wheel makes it easy to select the appropriate PTM setting. Previously, the system required a sequence of taps reminiscent of ’80s video-game cheat codes. 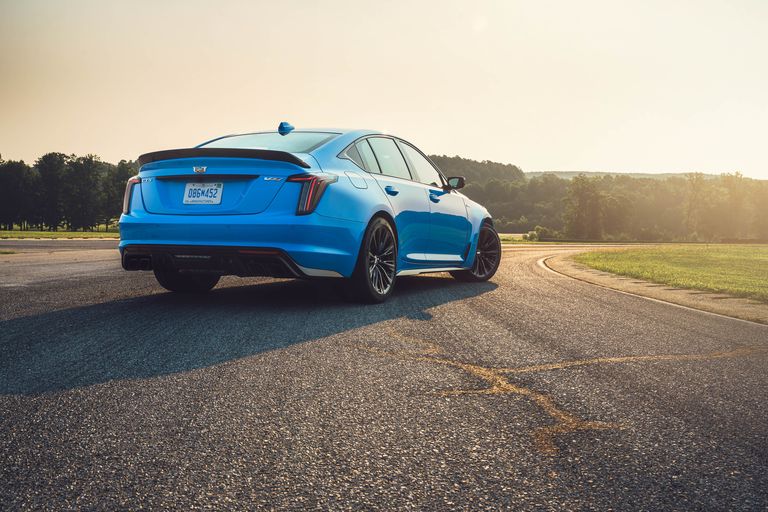 Those PTM modes work so well, GM development drivers used the most permissive Race setting when setting lap times. Cadillac did some development at VIR and probably spent several sets of Blackwing-specific Michelin Pilot Sport 4S tires chasing the 2:49.3 lap laid down by the Mercedes-AMG GT63 S at Lightning Lap a few years ago. In the hands of development engineers, the CT5-V Blackwing turned a 2:49.5. Not impressed? The Blackwing costs $87,090, or about half as much as the AMG GT sedan did in 2019. GM engineers also claim that the car that set the fast lap wasn’t quite final spec and that a lot had been done since its last trip to VIR. Regardless, the CT5-V Blackwing has a decent chance of taking the four-door crown from the AMG.

“Nobody sweats the details like GM” used to be an advertising tagline that nobody really believed. But it definitely applies to the Blackwing. The mesh on the grille went through some 40 variations until engineers decided that they’d achieved the best possible flow. Mufflers were prototyped, cut open, reworked, and resealed many times before finding the perfect sound. Driving one makes it clear that it’s the sum of thousands of details, thoughtfully considered and executed. Tony Roma, Mirza Grebovic, Bill Wise, Chad Christensen, Sim Gill, Brandon Vivian, Scott Sier, and Blaine Heavener are just a few of the people on the team that made this car happen and sweat the details. The resulting CT5-V Blackwing is one of the best sports sedans of recent memory. Buy one while you still can. 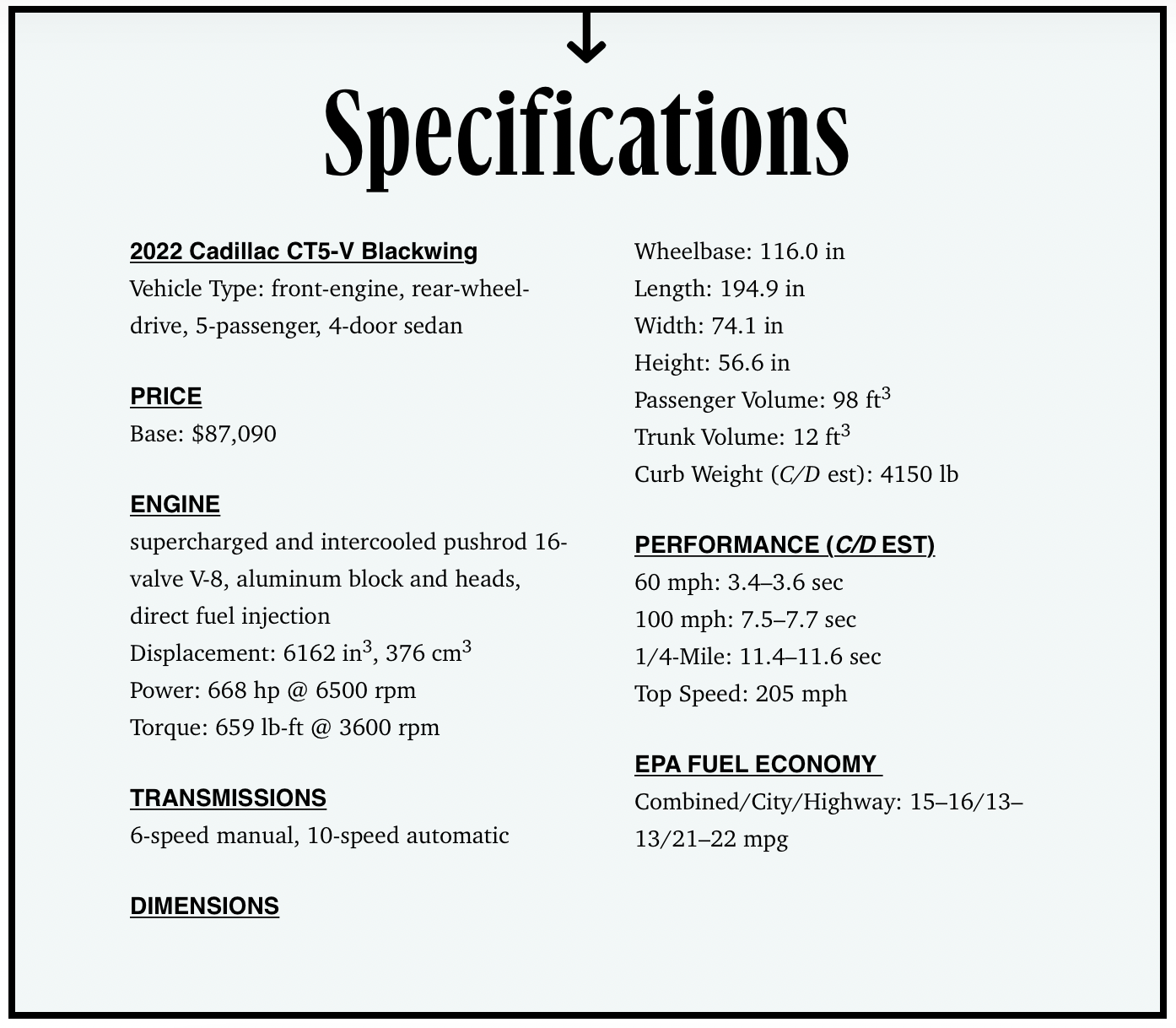