Jackie Aina grew up in L.A.’s San Gabriel Valley, which she’s previously described as “kind of a hood and kind of suburban.” But that was her experience growing up in La Puente, a relatively poor community just south of West Covina, where Aina was raised in a three-bedroom, one bathroom house she shared with eight family members. Today, the 33-year-old is now arguably YouTube’s top Black beauty guru, and one of the internet’s top beauty gurus in general — right alongside big names like Jeffree Star, Jaclyn Hill, Nikkie de Jager, James Charles and Tati Westbrook — with millions in the proverbial bank.

So while she still lives in the San Gabriel Valley, Aina’s residential circumstances have changed dramatically. The veteran influencer has bought a $6 million mansion in the wealthy city of Arcadia, just east of Pasadena and immediately west of Monrovia and Bradbury. All-new and completed this year, the lavish spread includes more than 10,000 square feet of living space across a main mansion and detached guesthouse. There’s garaging for four cars, plus a resort-style swimming pool and sophisticated security system.

It’s been a long road to the top for the U.S. Army veteran. Divorced in her early 20s, Aina’s subsequent YouTube career brought her fame and fortune — she has more than 3.5 million subscribers and nearly 400 million lifetime views on her main channel — and she’s parlayed that fame into the lucrative cosmetics and home goods industries. Over the past few years, the budding entrepreneur has released makeup collaborations with top brands like Too Faced and Anastasia Beverly Hills; last year marked the debut of her own brand Forvr Mood, which sells a range of scented candles and sprays.

Like nearly all top influencers, Aina has also faced her fair share of criticism and controversy. Detractors are quick to point out her occasionally petty online squabbles with fellow YouTubers, and they’ve also accused her of participating in a so-called “fake giveaway” that prompted the contest’s winner to file a complaint with the U.K.’s Advertising Standards Authority (ASA). Still, Aina has received kudos from many for her famously blunt, no-holds-barred reviews of beauty products and companies, particularly those she sees as not inclusive of people of color.

And with her fiancée Denis Asamoah, Aina can easily shake off the critics from the comfort of her lavish Arcadia home. Jiawei Shen of Coldwell Banker held the listing; Ikem T. Chukumerije of Westside Premier Estates repped the buyer.

Built on speculation by a local couple, the fully landscaped estate spans more than a half-acre of land, with mature palm trees front and rear. For privacy, the gated property is equipped with cameras and a sophisticated alarm system.

Aina’s guests will be gobsmacked by the entry. There are marble floors galore, paneled walls, a Kia Soul-sized crystal chandelier and double-height ceilings.

Immediately flanking the entry are both a wood-paneled office and airy living room, the latter equipped with a fireplace and connected to a formal dining room. 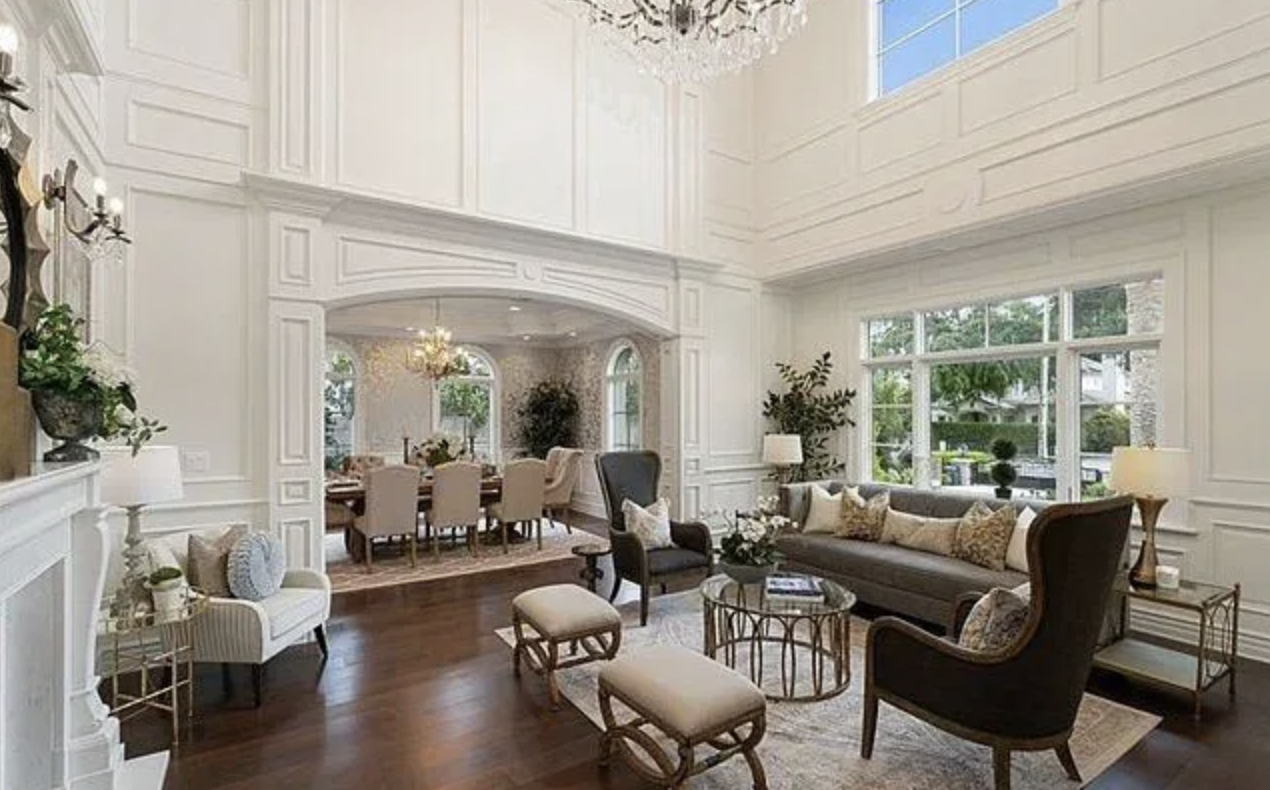 The dark hardwood floors flow into this space, which is très chic with its formal wainscoting and shimmery wallpaper. Arched windows overlook the gardens.

There’s also a fully custom wet bar that outsizes some “regular” homes’ kitchens, and connects to a walk-in wine closet.

Relax in the sumptuous family room, which has wooden built-ins and dual sets of French doors opening to the backyard.

The house is also blessed with not one but two kitchens, one of them a traditional Chinese wok kitchen for aromatic cooking and the other a glitzier (and substantially larger) chef’s kitchen with two marble-topped islands, and a white-and-gold color scheme.

There’s also an upstairs romantic balcony — if you’d like to call it that — overlooking the lower level, complete with a sitting area and serviced by a built-in wet bar with beverage refrigerator.

The master suite alone is the size of a small house, with a vast bedroom, all-marble bathroom, and a boutique-style closet with custom glass-fronted cabinets and a marble-topped storage island. Also off the master is a covered terrace overlooking the backyard.

From the main house, a notably wide patio spills out past grassy lawns and manicured boxwoods to the swimming pool, which is flanked by mature palms.

The detached poolhouse/guesthouse offers a shady loggia with an outdoor fireplace, perfect for small gatherings. Inside, the ancillary structure offers a bar area, and a full bathroom plus a separate sauna room. Then there’s the spacious main room, which has hardwood floors and could easily be converted into a seventh bedroom or gym.

A raised spa with a waterfall feature adjoins the pool, and there’s ample patio space for a veritable army of sunbathers.

Arcadia, a fancy L.A. suburb with one of the best public school districts in all of California, is primarily known for its many multimillion-dollar mansions and for being home to the famed Santa Anita Park racetrack, where thoroughbred horses have long competed in prestigious races. Almost directly adjacent to the racetrack are the stunning (and reportedly haunted) gardens of the L.A. Arboretum.