Would You Rather: Ford Mustang Mach 1 or Jeep Wrangler Rubicon 392?

It’s 950 horsepower worth of star-spangled bombast. Do you go with the slick Mustang or the roaring Wrangler?

Last year, with fireworks canceled, we had to stage our own show with the help of a Ford Mustang Shelby GT500. That endeavor involved an aerial array called the Po-Po Magnet. This year, the local fireworks are back, but we still got our hands on a Po-Po Magnet—in fact, two of them, the 2021 Jeep Wrangler Rubicon 392 and the 2021 Ford Mustang Mach 1. Together, they pack 11.4 liters of displacement, 16 cylinders and 950 horsepower. Both of them bellow out star-spangled ‘splosions as well as any 4th of July finale, but their missions are totally different. Which one would you rather have?

The Mustang, new this year, slides into the spot formerly occupied by the Shelby GT350 (and, to some extent, the Bullitt, and the GT with Performance Package 2). You don’t get the GT350’s singular flat-plane-crank V-8, but you do get its Tremec TR-3160 six-speed manual transmission and the Bullitt’s 480-hp 5.0-liter V-8. Also available: the 10-speed automatic. With the Handling package, the Mach 1 approximates the PP2 setup, with a few liberal dashes of Shelby (like the rear subframe). With the manual transmission, we clocked zero to 60 in 4.3 seconds.

The Jeep’s automotive niche was formerly occupied by, I guess, big-dollar AEV conversions and Monster Jam trucks. There’s really nothing else like it. Under the hood, Jeep crammed its 6.4-liter Hemi V-8, which makes 470 horsepower and 470 pound-feet of torque. That’s really all you need to know—they built a 470-horsepower Wrangler. It retains the Rubicon models’ off-road hardware, with triple locking differentials, an electronically disconnecting front anti-sway bar and huge 33-inch tires, but adds a trait heretofore unseen in the realm of Wrangler: ungodly acceleration. This is a Wrangler that doesn’t offer a rear-drive mode for the transfer case, which is just as well since it can do all-wheel-drive burnouts. The quad-pipe exhaust is linked to a button on the dash that allows you to make it louder. In case you’re wondering, the quiet mode is also loud. We haven’t yet tested it at the track, but Jeep’s claimed zero-to-60 time of 4.5 seconds seems plausible. 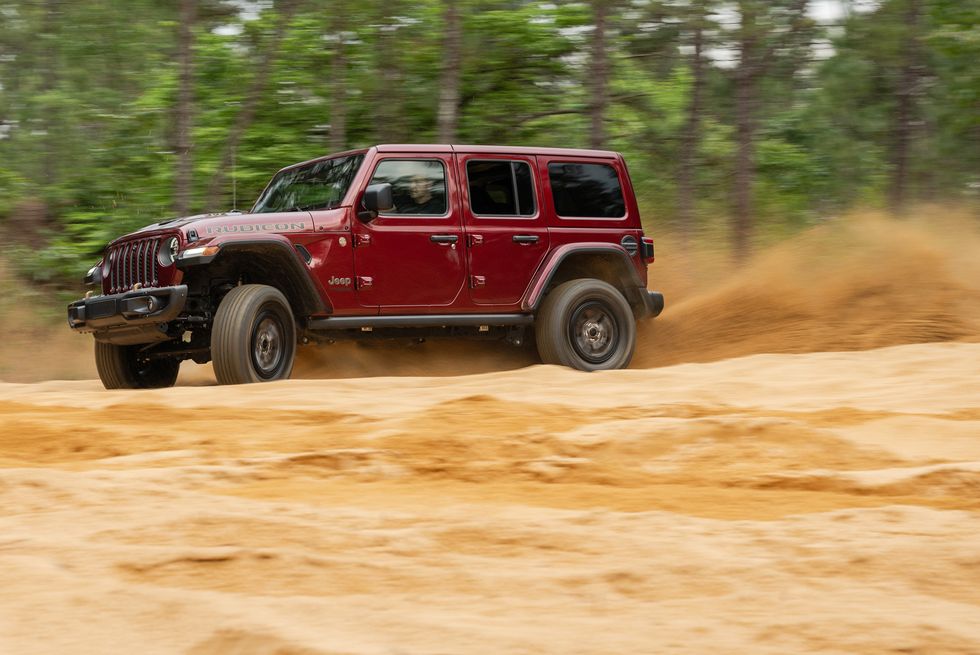 For all its bombast, the Jeep is perversely practical. It’s a four-door, seats five, and can tow 3500 pounds. In the winter, it’s capable in deep snow, and in the summer you can take the top off (and the doors, if so inclined). As for off-roading, where do you want to go? If you can’t get there in this thing, you need a helicopter.

The Mustang is also everyday usable, given its capabilities—in 9.9 seconds it can hit 100 mph, a speed the Jeep can’t even attain (it’s electronically limited to 99 mph). The selectable performance modes range from soft and quiet to outrageously loud and rambunctious, the magnetic ride control suspension, active exhaust and gauge cluster orienting themselves to suit the mood. Like all Mustangs, the back seats are usable and the trunk is decent. We even saw 22 mpg on our 75-mph highway fuel economy test, and that’s a figure that the Wrangler 392 won’t see unless all your trips are downhill. The Mach 1 barks and bellows and can lay down a quick lap time, but you could also drive it to work every day without feeling like you’re sacrificing comfort to the gods of speed. Plus it has a numbered plaque on the dash. And numbered plaques are always fun. 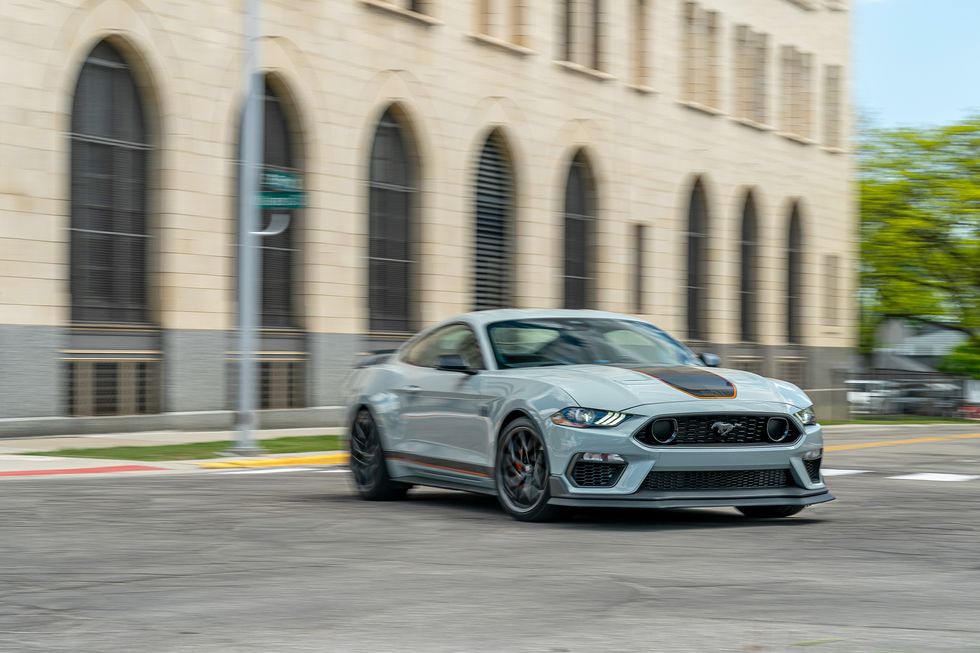 The Mach 1 is also the more affordable option. The one that we track-tested cost $63,745 with most of the options except the automatic. Meanwhile, the Wrangler Rubicon 392 starts at $74,995 and cost $77,070 as-tested. For that kind of price differential, you could pick up a Mach 1 and an old Wrangler to slam around out on the trails. Logically, the Mach 1 makes more sense—quicker, cheaper, more efficient, and way better to drive on pavement, which is where the 392 will also find itself most of the time anyway.

But the heart wants what it wants, and what mine wants is an overgrown Stomper truck that sounds like a Funny Car and can bark all four tires on pavement. If you’re going for glorious domestic V-8 excess, go all the way. When you’re driving the Mach 1, you never wonder to yourself, “They actually built this?” In the Jeep, that thought occurs twice a mile. And that’s why I’d rather have the Wrangler Rubicon 392, the most ridiculous vehicle of the year. So far.