Three wave pools, including one designed by champion surfer Kelly Slater, are due to open in the Coachella Valley in 2022 and 2023.

Seeking waves in the parched California desert sounds like the delusion of a stereotypically stoned and sun-bleached surfer, but it’s about to be reality, thanks to three high-tech wave pools coming to the Coachella Valley. This should come as no to shock to Chris Hemsworth, Shaun White, Diplo and Oscar-winning Free Solo director Jimmy Chin, some of the lucky few who have already had the privilege of surfing 100 miles inland, at Kelly Slater’s invite-only Surf Ranch in Lemoore, California (not far from Fresno).

Surf Ranch is the prototype for Slater’s newest project: a wave pool at Coral Mountain, a community planned for La Quinta, California, that will include a 150-room hotel, wellness spa and single-family homes starting in the high $2 millions. “Coral Mountain is meant to be a well-rounded sports and wellness community for the entire family,” says Michael B. Schwab, founder of Big Sky Wave Developments, which, with Meriwether Companies, is behind the 400-acre project. “A surf destination will complete the surrounding golf, tennis, event venues, and hiking and biking trails already existing in the area.”

Designed by Kelly Slater Wave Company, Coral Mountain’s half-mile wave basin — projected to open in 2023 and powered by green energy — hopes to create the world’s tallest and longest human-made wave. It also will have extended bays for surfers who are far from professional. “A novice can learn to surf on the same day a professional surfer has one of the best surf days of their life,” says Schwab. (While wave pools lose significant water to evaporation, developers point out that they use significantly less H2O annually than golf courses.)

Whereas Coral Mountain will be reserved for residents and hotel guests only, The Palm Springs Surf Club — set to open in June — represents a democratization of the wave pool. “We cater for everyone,” says creative director Jamo Willis. “We want all people to come and learn to surf and get that first wave or that first barrel and just be so excited because they had that experience that might [otherwise] take years. In two days of surfing, you get more waves than in half a year, and that gives you the confidence to get out there in the ocean.” According to Willis, there are 1.2 million surfers living within a two-hour drive of Palm Springs. 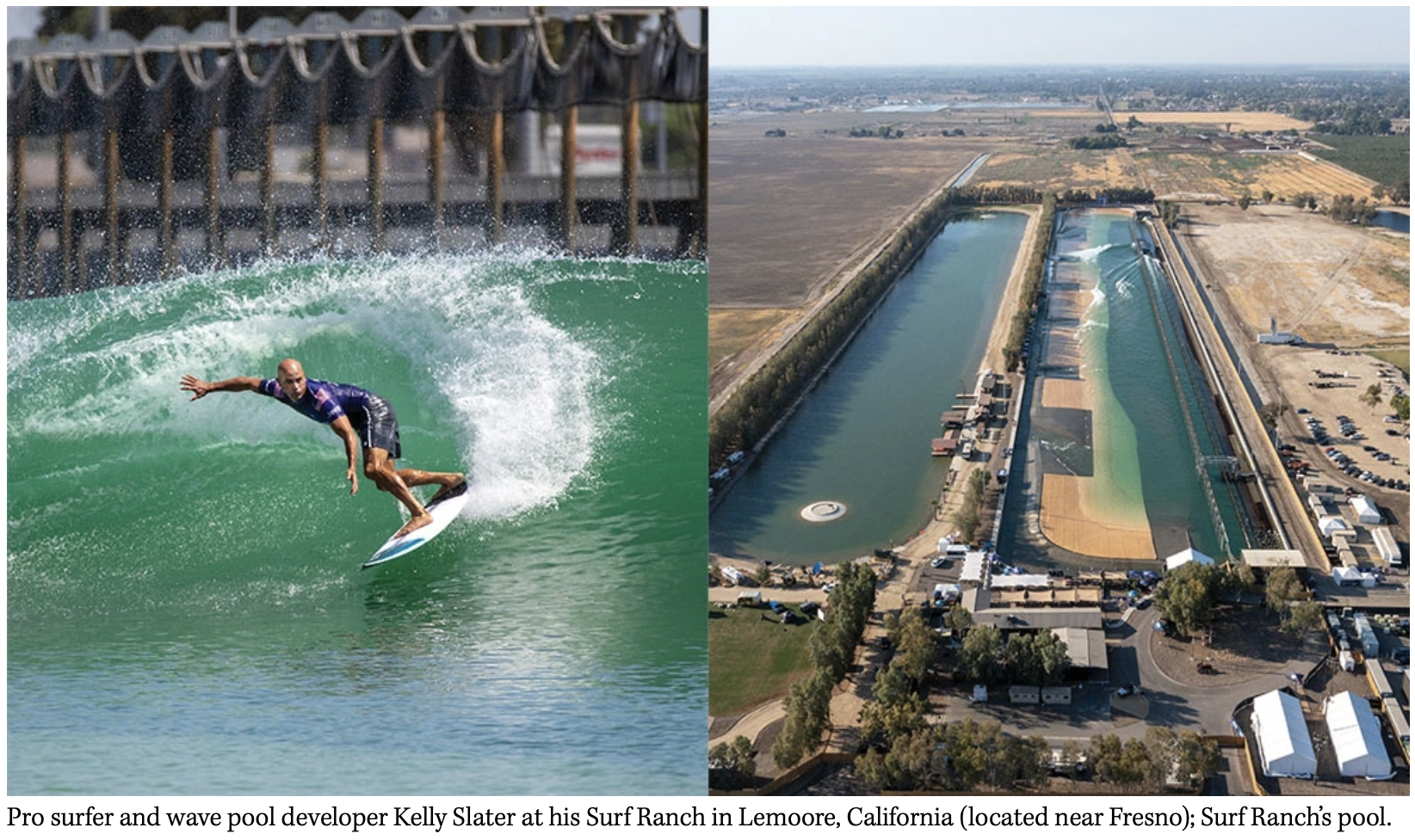 The upscale surf resort, with a vibe Willis describes as a blend of Mykonos, Tulum and the Sahara desert, will feature not only the pool — which uses pneumatic air-chambered Surfloch technology to create waves — but also restaurants, bars, cabanas, lap pools and a beach club. “We wanted to build something a wave park has never had before,” says Willis, “and that’s creating more of a lifestyle experience around the pool, not just for surfers but for everyone.” He likens the beginner section to a green run at a ski resort, with double-diamond-like waves for advanced wave riders

DSRT Surf is the third concept proposed for the area, featuring waves in a diamond-shaped pool by The Wavegarden Cove, a boutique hotel, skate park, recovery center, restaurants and access to Desert Willow golf courses, projected to open on 18 acres in Palm Desert in 2023. The pool will also have dedicated hours for stand-up paddle-boarding, kayaking and bodysurfing.

The appeal of these pools — beyond the obvious perk of consistently flawless waves — is that there are “no crazy tides, no sharks and no dangerous reef. Everything people worry about, it’s not there,” says Willis. And unlike in, say, Malibu or Manhattan Beach, “there’s nobody dropping in on you, which takes a lot of the stress out.”