Unlike Toyota, Hyundai isn’t really known for its hybrids. Although its Ioniq hatchback is a solid shot across the Prius’s bow, Hyundai doesn’t broadly tout the fuel-sipping virtues of its hybrid powertrains, instead focusing on its familiar narrative of value and accessible luxury. But perhaps that’s changing. Over the past year, the company has rolled out hybrid versions of several of its popular models, including the Sonata family sedan, the Elantra compact car, and the Tucson and Santa Fe SUVs.

For the 2021 model year, the mid-size, two-row Santa Fe has been given a fresh face, more standard and optional equipment, and a new hybrid powertrain: a 178-hp turbocharged 1.6-liter four-cylinder paired with a 59-hp electric motor and a conventional six-speed automatic transmission. Combined output is 226 horsepower. The Santa Fe is in a precarious position within Hyundai’s lineup, positioned between the exceptional three-row Palisade and the boldly redesigned 2022 Tucson, the latter of which is also offered with the same hybrid powertrain. But the Santa Fe hybrid’s high-end features, confidence-inspiring character on the road, and appealing design all justify its place alongside the brand’s other SUVs. 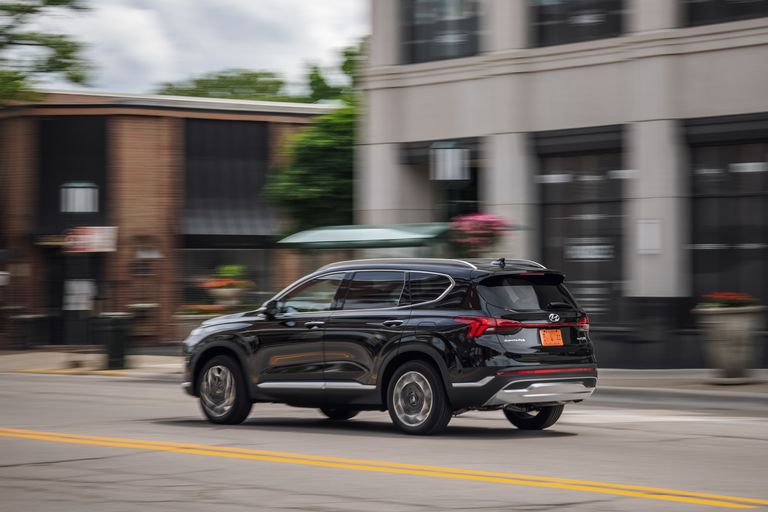 At the test track, our all-wheel-drive Limited test ute got to 60 mph in a decent 7.5 seconds and sailed through the quarter-mile in 15.7 seconds at 90 mph. These numbers are close to the Santa Fe hybrid’s only direct rival, the Toyota Venza, which was a bit slower in both metrics. Don’t worry that the gas-electric Santa Fe is 1.5 seconds slower to 60 mph than the more-powerful turbocharged Calligraphy model we last tested. The immediate throttle response of the hybrid’s electric motor at slower speeds makes it feel plenty eager in normal driving. Not only that, but the handoff between gasoline and electric power is virtually seamless. Only occasionally did we notice a slight thud as the four-cylinder deactivated while coasting to a stop, indicating that the power source had changed. 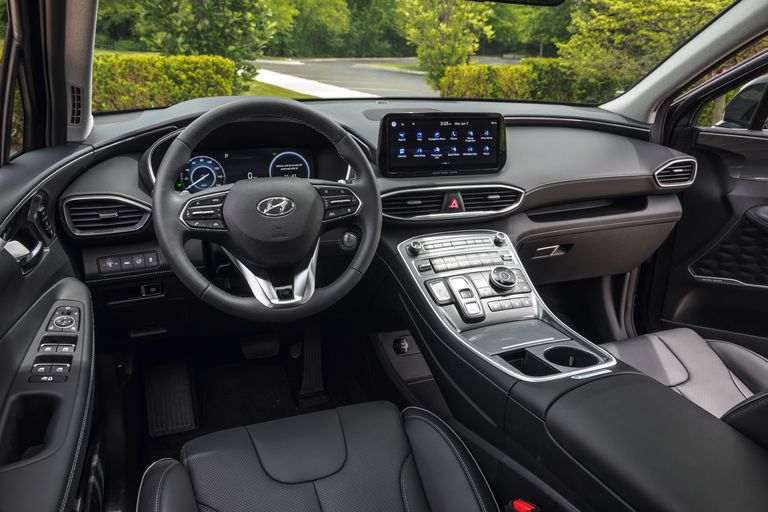 The Santa Fe Hybrid’s cabin is impressively hushed. We measured a quiet 68 decibels at 70 mph, and the 69-decibel level it produces at full throttle is a substantial 7 decibels quieter than the non-hybrid turbocharged 2.5-liter version. But its ambiance is occasionally disturbed by Michigan’s heavily pockmarked asphalt, which the suspension doesn’t always dampen out. Otherwise, the handling of our test car on its 19-inch Continental CrossContact LX Sport all-season tires was similar to what we experienced in the regular model. The 0.82 g of grip we measured on the skidpad is adequate, although we’d prefer a shorter stop from 70 mph than the hybrid’s 183 feet—some eight feet longer than the standard model. From behind the wheel, there’s a feeling of solidity that reminds us of premium SUVs such as the BMW X5, and our test vehicle was decked out with features that bolster that impression. 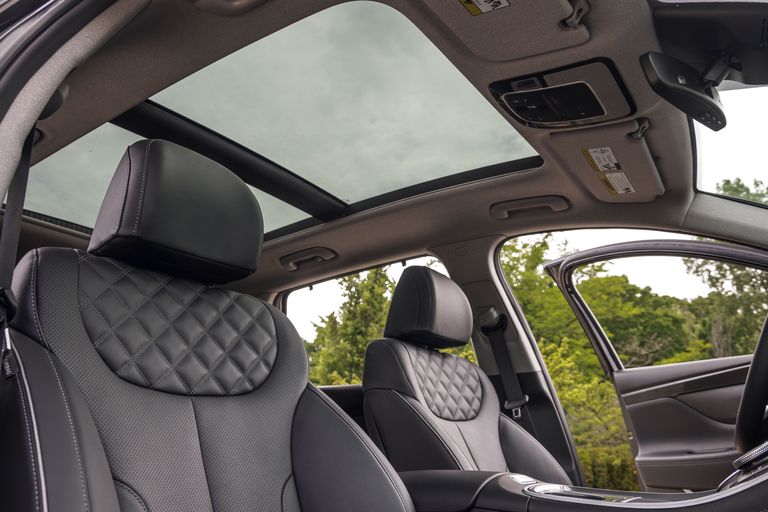 Our Black Noir-painted example featured comfortable leather-trimmed seats with an upscale quilted pattern on the backrests. Dual digital displays serve as gauges, and infotainment and other luxuries—such as a Harman Kardon stereo and a large panoramic sunroof—added to the upscale vibe. Some cheaper plastics can be found on the lower, less-visible sections of the door panels and center console, but the top Limited trim easily meets the expectations set by its $41,135 base price. Even at the entry-level Blue model’s $34,835 starting point, the Santa Fe hybrid is nicely finished.

But a hybrid also needs to deliver on fuel economy, and the Santa Fe’s EPA estimates of 33 mpg city and 30 mpg highway are well below the Venza’s 40/37 mpg ratings. We tested both vehicles on our 75-mph highway fuel-economy test and recorded 31 mpg for the Hyundai and 36 mpg for the Toyota. That said, the Santa Fe hybrid fares notably better than some nonhybrid alternatives, such as the Honda Passport and the aforementioned Santa Fe Calligraphy, both of which managed 27 mpg in the same test. We averaged 28 mpg during the course of our car’s loan. 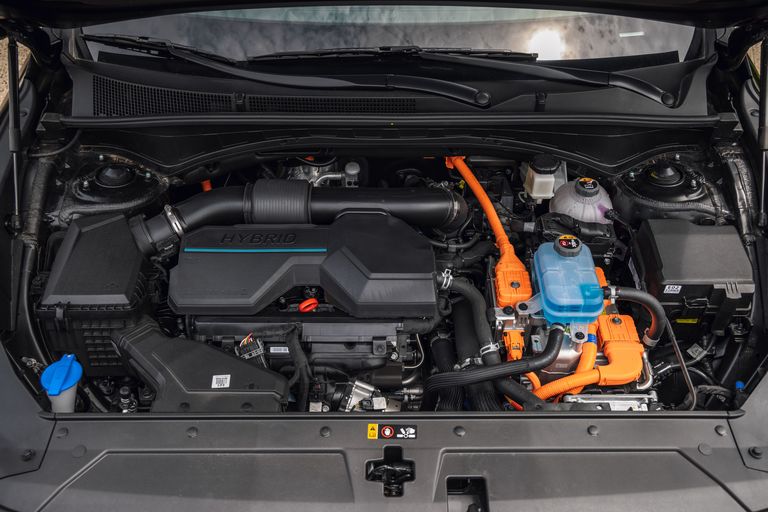 While the auto industry as a whole is moving toward electric-only driving, hybrids such as the Santa Fe offer a means for range-anxious buyers to test the waters. This Hyundai’s biggest issue is that it shares showroom space with the 2022 Tucson hybrid, which is nearly as spacious, just as nicely outfitted, and slightly cheaper. A plug-in-hybrid Santa Fe will join the lineup for the 2022 model year, but it’ll only be sold in select states. We’ll also likely see an all-electric Santa Fe-sized SUV at some point as Hyundai expands its Ioniq range of electric vehicles, starting next year with the Ioniq 5. Until then, the updated Santa Fe hybrid is an attractive two-row crossover with a premium cabin, a well-integrated hybrid powertrain, and above-average fuel efficiency.