The heroes who went clobberin’ through the pages of Marvel Comics in the 1980s were still relative kids when the mythology over at rival publisher DC started creaking under its own weight. Superman and Batman had started fighting crime in the late ’30s, for Pete’s sake, and the many iterations of their stories, not to mention those of less revered characters, had piled up in confusing or contradictory ways. The solution was a series called Crisis on Infinite Earths, envisioning a collision of alternate realities in which some characters died, others had their stories straightened out, and many (though far from all) overly literal fanboys were allowed to stop fretting if next month’s adventure contradicted one they read fifteen years ago.

That influential series solved some obvious problems. By contrast, one might wonder what issues are being fixed in Jon Watts’ Spider-Man: No Way Home, where Spidey and Doctor Strange open a rift between parallel dimensions, forcing Tom Holland’s Spider-Man to face villains who starred in movies opposite Tobey Maguire’s and Andrew Garfield’s versions of the character. 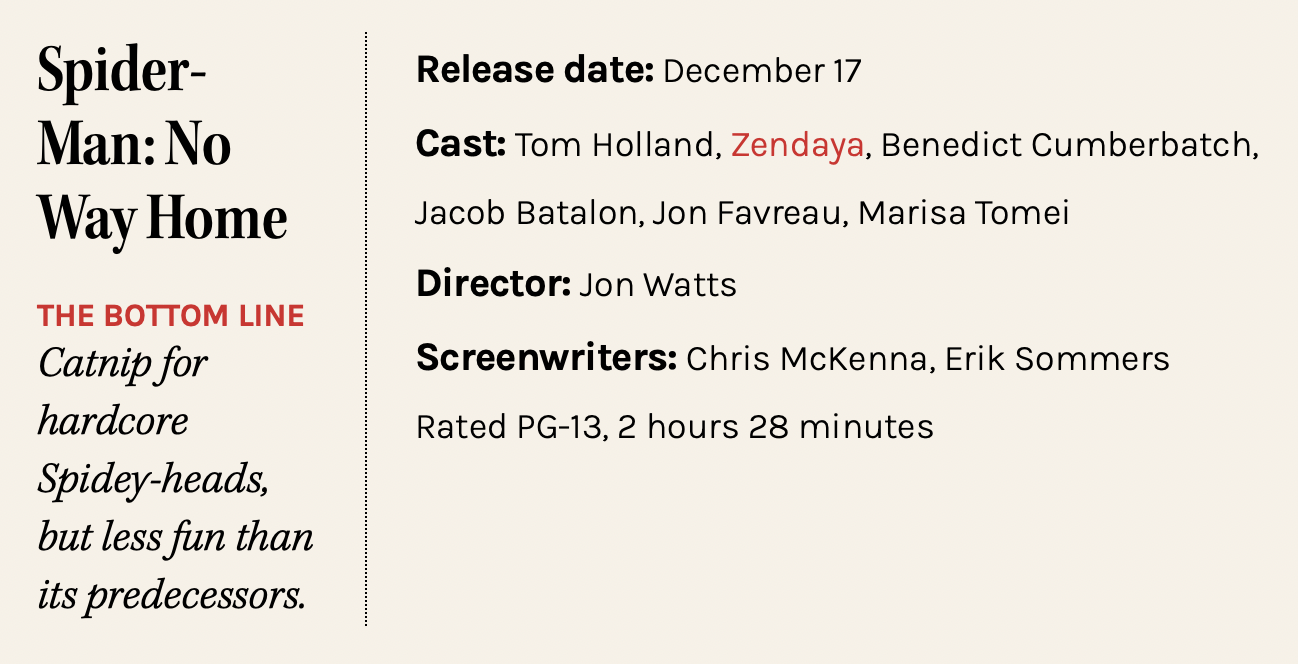 Was the problem “there’s not enough fan service in Marvel movies”? Certainly, this outing is a textbook example of that phenomenon, in which little moments of pandering (be the moments loving or cynical) make inside jokes, throw in gratuitous cameos, or bring intergalactic bounty hunters back to life because there just aren’t enough Star Wars products out there yet for Disney to sell.

Some of the fan service plays fairly well here; some is unsubtle enough you expect an actor to look into the camera and wink at you after delivering his line. But in the end, No Way Home does use its multiversal mayhem to address the only real problem with the Holland-era webslinger: the Iron Man-ification of the character, in which his already amazing powers keep getting overshadowed by the gadgets given to him by billionaire jerk-hero Tony Stark. This is the least fun of the Watts/Holland pictures by a wide margin (intentionally so, to some extent), but it’s a hell of a lot better than the last Spidey threequel, Sam Raimi’s overstuffed and ill-conceived Spider-Man 3.

The story begins with the scene that closed the last film: Spidey is perched outside Penn Station when J. Jonah Jameson (J.K. Simmons) exposes his secret identity. Soon, the whole world knows it’s Peter Parker under that mask, and hordes believe Jameson’s bizarre claim that Spider-Man is a war criminal. (This iteration of Daily Bugle editor Jameson is obviously modeled on real-life idiocy-promoter Alex Jones; but as is often the case these days, intended satire pales in comparison to the stupidity of the real thing.)

Life gets hard for our hero and his pals Ned (Jacob Batalon) and MJ (Zendaya), who have to deal with constant media attention and uncomfortable scenes at school. Somehow (just don’t question it), this notoriety even prevents the three brainiacs from getting into any of the colleges they apply to. So Peter Parker heads to Greenwich Village, hoping Doctor Strange (Benedict Cumberbatch) can cast a spell and make his identity a secret again.

Several moments of poor judgment later, Strange has had to quash his own out-of-control magic, which threatens to summon to our planet every person, on every alternate Earth out there, who knows the name Peter Parker. But the cat’s partly out of the bag, and any viewer who has seen a trailer knows at least some of the characters who are coming to play — first, and most enjoyably, Alfred Molina’s Doctor Octopus.

As the old villains reappear, we’re reminded that practically every one of them is a good soul gone wrong — some made monstrous by the same kind of dumb luck that made Peter a hero. So when Strange prepares to send them back to their own timelines (where, we may recall, most of them perish spectacularly), Peter balks. Urged on by his fiercely moral Aunt May (Marisa Tomei, the only woman in the multiverse who can get away with the godawful outfits these movies give her), he insists on trying to heal the villains before sending them home. Arguments between Avengers being what they are, Spidey and Strange duke it out in a magical realm where the scenery goes all Inceptiony on them, then Spidey steals a magic doodad and sets off to cure the bad guys.

Rather than spoil any of the surprises the plot may have in store, let’s talk about the elephant in the room: Who thought it was a great idea to tackle this material so soon after practically the same thing happened in 2018’s animated Spider-Man: Into the Spider-Verse? That rollicking, eye-popping adventure was so fresh, funny and exciting that No Way Home can really only look stodgy in comparison, relying on the novelty of faces we haven’t seen in a while and building up to the kind of operatic emotional moments the previous Watts films tended to avoid.

Yes, Peter suffers here, losing so much he’s at risk of also losing the spirit that has made Holland’s Peter Parker so winning on screen since swinging into Captain America: Civil War. At moments, the anguish feels like the paint-by-numbers routine of superhero franchise-building: more of the same, despite the unusual circumstances.

But there’s a lightness to the movie’s final scene that makes one hopeful. What if all this colliding-multiverse stuff freed Peter from attachments, not only to his former incarnations, but to some of his more grandiose present-tense buddies as well? Would it be so bad if he were allowed to be a “friendly neighborhood Spider-Man” for a while, with no obligation to fight aliens and giant monsters every other year? Let Doctor Strange explore the mystic depths for a while, and let Spidey swing.