If you’re flying Southwest Airlines this weekend,make sure to check your flight before you leave for the airport.

“Air Traffic Control (ATC) issues and disruptive weather have resulted in a high volume of cancellationsthroughout the weekend as we work to recover our operation.We appreciate your patience as we accommodate affected Customers as quickly as possible,” Southwest said in an emailed statement.

After receiving pushback to that initialstatement online from those whopointed out that the Federal Aviation Administration’s delay websiteshowed no evidence of delays, the airline issued an updated statement.

“We experienced significant impact in the Florida airports yesterday evening after an FAA-imposed air traffic management program was implemented due to weather and resulted in a large number of cancellations.

“Weare working hard behind the scenes to minimize challenges and fully recover the operationas wetake care of displaced Crews and Customers as quickly as possible. We will continue to reset our network today and hope to return to close to normal operations as we move into Sunday,” the statement from Southwestread.

Southwest did not comment on speculations circulating online claimingthe issues might be related to labor action due to vaccine mandates.

A spokesperson for the Southwest Airlines Pilots Association toldThe Arizona Republic that the organization wasunaware of any labor-related issues and would not condone any sort of work stoppage.

Though the issues did not happen in Phoenix, the impact is being felt in the Valley just as families are traveling to take advantage of fall break.By 1:05 p.m. on Saturday afternoon,Sky Harbor Airport showed110 flights delayed and 53 canceled.

Allyson Therien planned to head home to Omaha, Nebraska, on Saturday morning but was unable to due to Southwest canceling her flight twice in one day.

Therien had been in Phoenix for over a week visitingfamilyand booked a flight homeSaturday morning.

“I was booked on a flight home to Omaha from Phoenix at 12:10 p.m. today. Received a text at 6:10 a.m. today that my flight was canceled and was redirected to rebook online,” Therien toldThe Republic. “I got the lastseat on the last flight to Omaha today, leaving at 6:50p.m. That flight just got canceled via textandam rebooked for a flight leaving tomorrow at 7:20 p.m.”

However, she said she’s “90% sure” that the flight will also be canceled given the issues the airline has been experiencing.

“I am here for vacation, visiting family. Fortunately, that means that I have a free place to stay and flexibility,” Therien said. “However, I was supposed to be inMinnesota for work on Monday morning.”

Thomas Ballan-Duran had purchased flight tickets for his family to fly from El Paso to Phoenix on Saturday to attend the 49ers vs. Cardinals game on Sunday.

“It was very upsetting and disappointing, especially because my family received the cancellation at 9 p.m. (Friday) and they were supposed to fly out from El Paso at 6:45 a.m.,” Ballan-Duran said in an interview with The Republic. 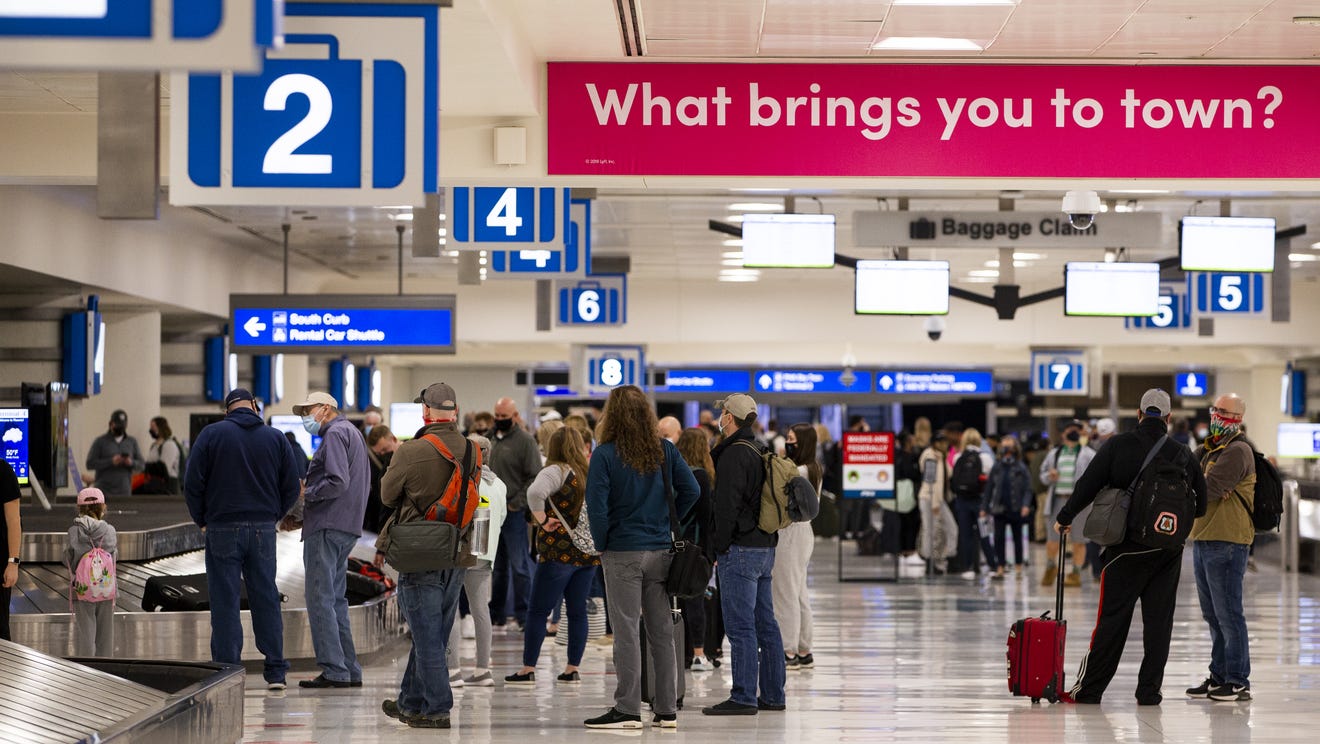 According to Ballan-Duran, the four flights were originally rebooked to a late-night flight on Sunday.

Ballan-Duran said after receiving the notice from Southwest Airlines, his family immediately reached out to the airline.“My mom was on the phone with them all night last night,” he said. “They were able to rebook my mom and my grandmother’s.”

Ballan-Duran said he was on a two-hour call with Southwest Airlines to try to rebook the other two tickets for his cousins who also plan to attend the game.

The airline offered Ballan-Duran’scousins to fly on the same flight ashis mom and grandmother, but for a charge of $280.“The other two ended up having to find a way to get a vehicle to drive out here,” he said. “Now it’s gonna be a fight as far as getting their money back.”

Ballan-Duran said the airline agents first said the flight cancellations were caused by weather concerns. “The weather is beautiful, leaving El Paso and here,” said Ballan-Duran. “They really didn’t give that definite answer as to why it was canceled.”

According to Ballan-Duran, this is the first problem his family has encountered with Southwest Airlines.“We really like Southwest,” he said. “It’s just very upsetting and disappointing.

“I just wish that they had better communication and better-accommodating situations to help the scenario,” he added.

“We encourage travelers to check their flight status with their airline before coming to the airport. And, especially because it is Fall Break, travelers should give themselves extra time and arrive early,” Heather Shelbrack, spokesperson for Sky Harbor Airport, said when reached by email.