COLUMBIA, S.C. — The University of South Carolina president has indicated he does not plan to ask the Legislature for permission to change the names of nearly a dozen campus buildings that a special committee says honors racists and Civil War figures.

Instead, interim university President Harris Pastides said he will encourage school leaders to concentrate on honoring deserving people on new buildings with the same committee suggesting a number of prominent Black leaders.

The police killing of George Floyd in May 2020 led to the removal of building names and statues to racists and Confederates across the South.

None of that happened in South Carolina because of a law called the Heritage Act passed in 2000 that requires a two-thirds vote from the General Assembly to change the name of any building based on a historical figure. In the past 21 years, lawmakers have not even taken a vote on any request from the Civil War or segregation eras.

The University of South Carolina has a special committee that has been studying building names across campus for two years. They found 11 they felt were named for racists, including a health center named for U.S. Sen. Strom Thurmond, who died in 2003. Thurmond started his political career fighting against people who wanted to end segregation, according to a draft report by the committee obtained by The State newspaper.

The committee was expected to issue its report Friday. But Pastides went ahead and sent a letter to campus leaders about it two days before.

“State law currently prevents us from changing those names, and we will follow the law. However, we have a duty to tell a more complete history of these individuals and their acts in the context of our shared community values,” Pastides wrote.

The interim president’s letter seemed to indicate the university would not ask lawmakers to change any names.

Before the 2021 legislative session started, Clemson University wanted to remove the name of U.S. Sen. “Pitchfork” Ben Tillman, who led violent racist mobs to stop Blacks from voting, from the name of its administration building, and Orangeburg wanted to remove a Confederate statue from outside its courthouse. The requests were never taken up, even in a legislative committee.

The 2000 Heritage Act was part of a compromise that removed the Confederate flag from atop the South Carolina Statehouse dome. In 2015, lawmakers removed the flag from the Capitol grounds after a racist massacre at a Charleston church killed nine Black worshippers. 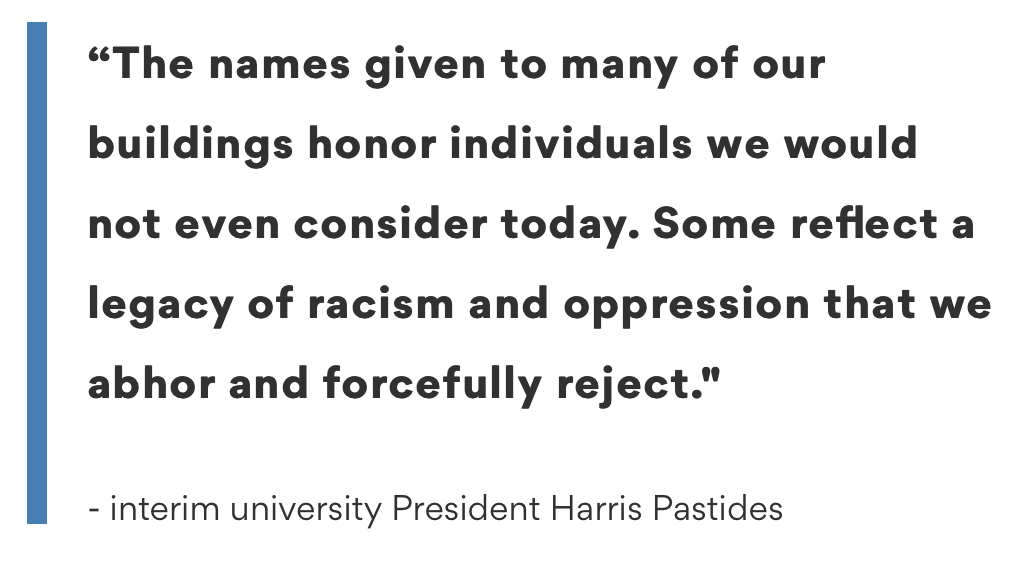 After the Confederate flag’s final removal six years ago, Republican House Speaker Jay Lucas said no more requests to remove statues or change building names would be taken up as long as he was in power. Lucas has kept his word.

Many South Carolina lawmakers and officials are waiting for a ruling after the state Supreme Court heard arguments in May for the first challenge of the Heritage Act. The widow of state Sen. Clementa Pinckney, one of the people killed in the 2015 church massacre, is one of the people suing the state.

Among the African American leaders the University of South Carolina wants to honor on new buildings are Robert Anderson, James Solomon and Henrie Monteith Treadwell, who were the first Black students at the school, as well as U.S. Rep. Jim Clyburn and Ernest Finney, who was the first Black chief justice of the state Supreme Court.

The new names “reflect our institutional values and culture of diversity, equity and inclusion,” Pastides wrote in his letter.

“The names given to many of our buildings honor individuals we would not even consider today. Some reflect a legacy of racism and oppression that we abhor and forcefully reject,” Pastides wrote.