Presenting Car and Driver’s 2021 EV of the Year

Foreshadowing a future when an electric vehicle’s range is secondary to how it drives, the Ford Mustang Mach-E is our EV of the Year.

If an automaker wanted to convert people from EV skeptics to EV evangelists, it’s hard to imagine a better vehicle for the job than the Ford Mustang Mach-E. It arrives in the familiar shape and size of the crossovers Americans love, at a price that competes with gas-powered alternatives, and with a design that gets noticed. The Mach-E has the range and charging speed to wave off the most common EV criticisms, and thanks to Electrify America’s recent work, there’s a nationwide charging network that makes long interstate trips not just possible but tolerable. For new EV converts, piloting a Mach-E isn’t so different from driving a gas-burning SUV that it feels foreign, yet the experience is futuristic enough to be exciting. It’s the right car to bring drivers along during this watershed moment as EVs transition from niche alternative to new normal.

Best of all, the Mach-E is fun. It moves us past the argument that we should drive EVs because they’re better for the environment and proposes a simpler, more fundamental truth: EVs can be as rewarding to drive as their gas counterparts. The Mach-E strikes a sweet balance between practical and visceral, landing in the space where Mazda often operates. Ford has built an EV that’s suited to kid-hauling duty, Costco runs, and daily commutes but that doesn’t strip the soul out of driving.

You don’t attack a road in this Mustang. You set a swift pace and find flow in a seamless plateau of torque as you transition between foot-to-the-floor acceleration and the precise modulation of regenerative braking during one-pedal driving. The all-wheel-drive, big-battery version makes 346 horsepower and hits 60 mph in 4.9 seconds. On city streets, tapping into that power is exhilarating. The Mach-E punches out of 25-mph corners and zaps past dawdling delivery trucks. Thrust arrives as fast as your foot can ask for it. 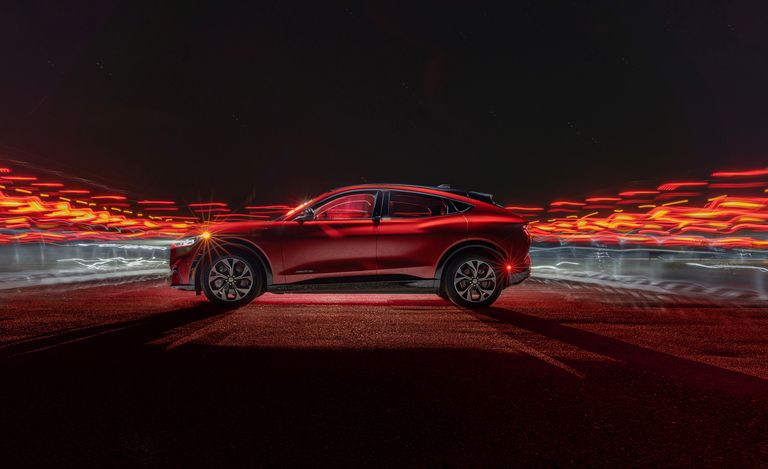 Ford adds drama with a synthetic soundtrack of a big-engine burble that’s been smoothed into a warble. The piped-in audio doesn’t read like a combustion engine and isn’t exactly the stuff of science fiction either. But based on how many of our drivers were content to keep the sound enabled, it appears that Ford has come the closest of any automaker to figuring out what an EV should sound like.

Unlike so many nose-heavy gas-powered competitors, this family crossover is surprisingly neutral if you push the speed in corners, and quick steering places the Mach-E exactly where you want it. Ballasted by the 88.0-kWh battery pack under the floor, the body stays flat and passengers remain upright as the car swings around bends feeling as planted as a hundred-year-old oak tree. On Michigan’s nastiest roads, though, the Mach-E bounces in a way that reminds us of other Mustangs, both the two-door and four-legged varieties. Ride quality is the one aspect where this Ford sometimes left us wanting.

The Mach-E sails down a 70-mph highway with remarkable isolation. To passengers, the outside world sounds like a 68-decibel breeze. The seats are supremely comfortable, and the driving position neatly splits the difference between car and crossover. You sit relatively high at the elevated vantage that so many buyers want, yet your legs stretch out in front of you, as in a car, thanks to the underfloor battery. Back-seat space is generous, and the deep cargo hold is roomy despite the fastback roofline. 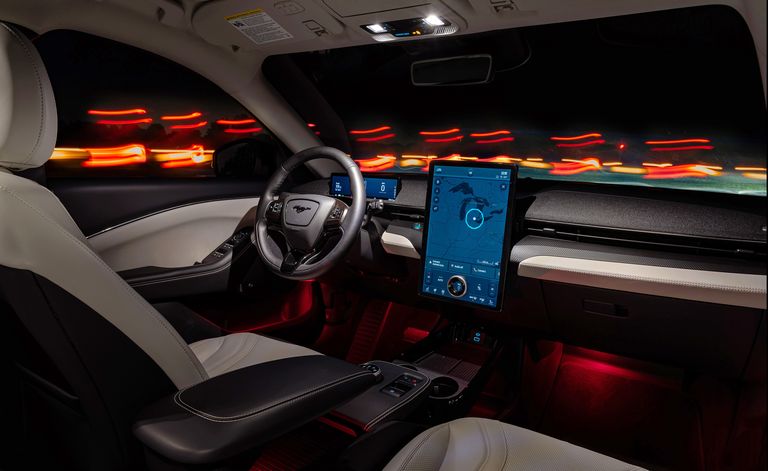 Ford clearly borrowed a few ideas from Tesla: panoramic fixed-glass roof, unconventional door handles, vertically oriented center display. While these highlights aren’t particularly original, Ford managed to make the cabin design feel fresh without resorting to gimmicks or trying to pass off cost-cutting meas­ures as innovation the way Tesla does. And unlike in, say, a Model Y, there’s no learning curve for driving a Mach-E. The gear selector doesn’t double as the cruise-control switch, like it does in Teslas. There’s a simple instrument cluster in the driver’s line of sight. And if we have to live with touchscreens in our cars, they all should be this huge. The Mach-E’s 15.5-inch screen supersizes the virtual buttons so they’re easy to peck at, and the interface is logically laid out.

All of these strengths would be moot if the Mach-E didn’t have the range to go long. According to the EPA estimate, the Ford is good for 270 miles on a full charge, and at a constant 75 mph in our hands, it came just 20 miles shy of that figure. In Car and Driver’s range testing, only the Tesla Model S has covered more ground. Not coincidentally, the Model S is the sole EV currently for sale with a larger battery.

The Mustang Mach-E starts at $43,995, a couple of thousand above the average transaction price of a new vehicle, although the federal tax credit can take $7500 off that sting, for now. The more powerful, longer-range, all-wheel-drive version that we drove opens at $56,400. Even at that price, the Ford has the premium materials and build quality to make the more expensive luxury cars in this year’s EV test look like rip-offs.

One key requirement for our EV of the Year—in addition to fun, value, and mission fulfillment—is that it make electric vehicles more desirable to buyers to a degree that moves the industry forward. That’s where the Mach-E stands out from the 10 other vehicles we evaluated. At long last, an automaker has given us an EV that competes head to head with Tesla on design, performance, price, and range, and it neither looks nor feels like it was built in a tent. It’s the perfect vehicle to rewrite preconceptions that were formed when the vast majority of EVs were too small, too slow, too expensive to buy yet too cheap to live with, and hobbled by too-short range and too-spotty public infrastructure that wouldn’t allow them to venture far from home. Plus, the Mach-E has the driving dynamics and design to push new buyers past mere acceptance of EV technology to excitement.

The worst thing about the Ford Mustang Mach-E is the name, which implies a loud and rowdy machine that will have you seeing red anytime a stoplight turns green. Ford triggered our emotions and raised our expectations by calling its EV crossover a Mustang, then delivered a vehicle that’s great in an entirely different way. It’s as smooth and calm as cars come, with quiet dynamic competence, ample room for four, and a cabin that appears luxury-car expensive.

But if the name is our biggest gripe, that says something major about the stuff that matters. An established automaker has created a relatively affordable, long-range EV with the gotta-have-it factor of a Tesla. It’s a pivotal moment as electric vehicles become far more intriguing to both mainstream buyers and enthusiasts. Even if we’re still not comfortable with the idea of calling the Mach-E a Mustang, we are calling it our EV of the Year.