November 20: A look at major COVID-19 developments over the past week

While new coronavirus infections remain relatively low in Georgia, there has been a slight uptick over recent days.

The seven-day rolling average of new confirmed and suspected COVID-19 infections has been in decline since the end of August, and bottomed out Nov. 8. But it has grown by about 23% since then, according to state data published Thursday.

Public health officials have warned about the risk of indoor gatherings as temperatures get colder.

Last year, Georgia started its third wave of the virus in October, but didn’t see infections peak until January, before vaccines were widely available. This year, the delta wave started around July 4 and didn’t peak until the end of August.

Vaccine wasn’t a factor in last year’s holiday surge, but this year about half of Georgians are fully vaccinated. Still, there are concerns about the state’s relatively low vaccine coverage as residents prepare to gather for the holidays.

Here’s a look at major developments over the past week and a look ahead related to the COVID-19 pandemic.

Boosters for all adults OK’d

U.S. regulators gave the OK to open up COVID-19 booster shots to all adults Friday.

The Food and Drug Administration’s decision stands to simplify what has been a confusing list of who’s eligible by allowing anyone 18 or older to choose either a Pfizer or Moderna booster six months after their last dose — regardless of which vaccine they had first. The move came after about a dozen states had started offering boosters to all adults.

Later Friday, advisors to the Centers for Disease Control and Prevention agreed anyone 18 and older can choose a booster of the Pfizer or Moderna vaccine but went an extra step and stressed that people 50 and older should get one.

CDC Director Rochelle Walensky signed off on the recommendation quickly, a final step to make the booster doses available to all adults.

The CDC also put out a plea for those who had previously qualified but hadn’t yet signed up for a booster to quit putting it off — saying older Americans and people with risks such as obesity, diabetes or other health problems should try to get one before the holidays.

Anyone who got the one-dose Johnson & Johnson vaccine could already get a booster. And the CDC recommends those adults who received the J&J vaccine should receive a booster shot at least 2 months after receiving the one-dose vaccine. 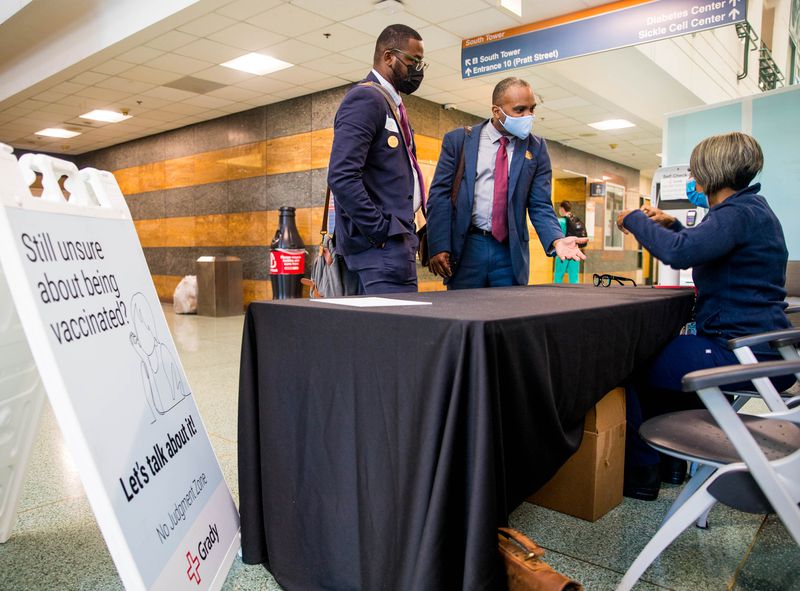 The CDC reports nationwide 31.4 million people have received booster shots, representing 17% of all adults who are fully vaccinated.

In Georgia, according to the state Department of Public Health, 690,227 Georgians have received a booster dose since they were authorized for some people on Aug. 13. That means 13.3% of fully vaccinated Georgians have had a booster shot.

Seniors continue to be the most vulnerable to serious illness caused by the virus, and with the vaccine showing waning efficacy five to six months after vaccination, boosters for that age group were among the first authorized by health officials.

The CDC reports that around the U.S., 37% of all fully vaccinated people 65 and over have received a booster, while in Georgia a third of those 65 and up already vaccinated have now received boosters.

Last year, almost as many Americans traveled by car during Thanksgiving as before the pandemic.

This year, they also are taking to the skies.

The Thanksgiving holiday rush will be a major test for airlines, which have struggled with staffing shortages and occasional operational meltdowns in recent months as traffic rebounded after plunging last year.

Atlanta’s Hartsfield-Jackson International Airport expects 2.22 million passengers for the Thanksgiving travel period between the Saturday before Thanksgiving and the Monday after the holiday.

That’s still below the 2.6 million people who passed through the terminals in Thanksgiving 2019, but up sharply from about 1.6 million last year.

The Wednesday before the holiday and the Sunday afterward are expected to be the busiest days of the Thanksgiving period. 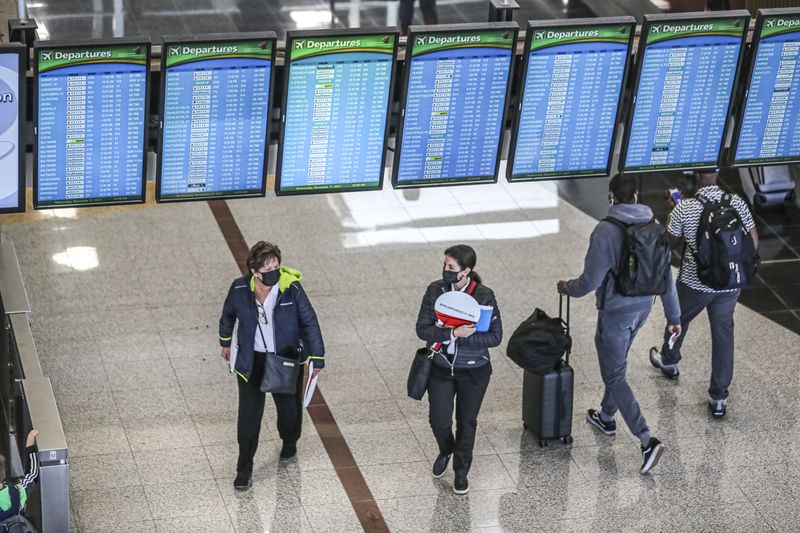 After staying home during the lockdowns early in the pandemic, many people ventured out last Thanksgiving to visit families in other cities, but they went by car and avoided planes.

AAA predicts 1.6 million people in Georgia will travel this Thanksgiving, including more than 108,000 taking flights. That will bring total traveler counts to just 3% shy of 2019, with airline passenger counts within 13% of 2019. Domestic leisure air travel has almost completely recovered, according to travel experts, while business and international travel lag.

Atlanta-based Delta Air Lines expects to handle as many as 5.6 million passengers across its flight network from the Friday before Thanksgiving through the Tuesday after Thanksgiving. That is more than double the 2.2 million last year but still short of the 6.3 million for Thanksgiving 2019.

Delta has worked for months to ramp up its workforce for the return of travelers, but acknowledged that it fell short in some areas earlier this year, leading to hours-long waits on customer service phone lines and headquarters employees called on to help staff and clean airport lounges. 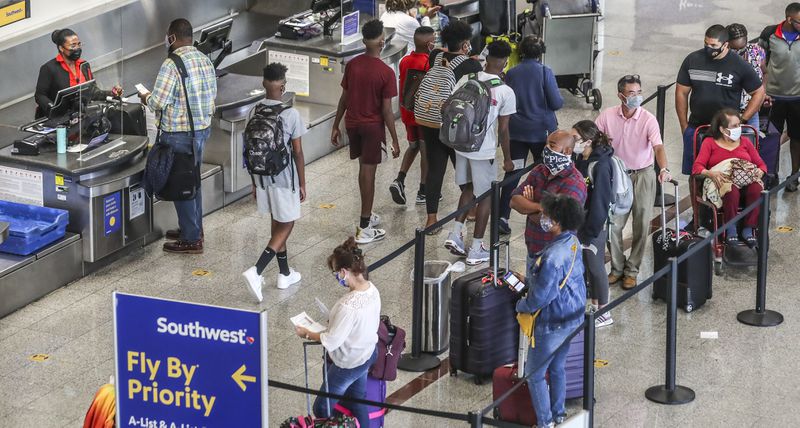 Southwest Airlines, the second-largest carrier at Hartsfield-Jackson, has had bouts of mass cancellations amid staffing shortages and other issues. Spirit Airlines also had hundreds of flight cancellations that frustrated passengers over several days in August.

Kelly Yamanouchi and The Associated Press contributed to this report.