As health experts question the wisdom of proceeding with the games in Japan — where just 6 percent of the population is fully vaccinated — the broadcaster, with billions at stake, is taking a big risk.

During the TV industry’s upfronts in May, Disney enlisted Jimmy Kimmel to liven up the proceedings with a stand-up routine. The ABC late-night star roasted the broadcast community but reserved his arguably sharpest words for NBCUniversal, saying, “NBC is planning to move forward with the Olympics this summer, even if they have to kill every last person in Japan to do it.”

As the Tokyo Olympics’ July 23 opening ceremony draws nearer, the outrage behind Kimmel’s zinger indeed has become a matter of urgency and zero humor within the host country of Japan, where just 6 percent of the population has been fully vaccinated against COVID-19 and polling regularly reports a large majority of the public is steadfast against the games going forward. The event has been engulfed by a cloud of cynicism, as commentators highlight the huge financial incentives behind the International Olympic Committee’s insistence on holding the games amid a pandemic.

“There’s always been big-time money lurking right behind the shimmering scrim of Olympism, but this time we’re seeing it laid totally bare — and we’re seeing how that money to an extent drives the entire Olympic machine,” says Jules Boykoff, a professor at Pacific University who specializes in sports politics (and who also played on the U.S. Olympic soccer team).

The IOC, led by Thomas Bach, generates almost 75 percent of its income from selling broadcast rights, and NBCUniversal, the U.S. rights holder, is the single largest source of that revenue, representing about 40 percent of the total. NBC paid the IOC $4.4 billion for the four Olympics spanning 2014 to 2020 and another $7.75 billion for the next six games running 2022 through 2032. Discovery Inc., which holds the European rights, is another major benefactor. Both companies have been banking on leveraging the games to boost their streaming platforms, Peacock and Discovery+.

When Tokyo was awarded the 2020 Summer Olympics in 2013, organizers forecast that spectators, mostly incoming international tourists, would spend some $2 billion on tickets, hotels, meals and merchandise, and the beneficial exposure and word-of-mouth effect of that foreign influx and attention — what local economists call “legacy effects” — would generate an additional $10 billion in inbound consumer spending in the coming decade. But with all foreign spectators now banned from attending the rescheduled Tokyo Olympics, the vast majority of the anticipated economic benefit for Japan is gone.

Instead, much of what remains of the Olympic profit bonanza may funnel overseas to the IOC and its broadcast partners, while the brunt of any public health calamity that might occur could likely first hit the Japanese people hardest. The scenario has the makings of an example of the economic principle of “moral hazard” — when an entity has an incentive to increase its exposure to risk because another party will bear the potential costs. Adds Boykoff, “NBC’s relationship to the Olympics — and that relationship being one of the main driving factors in pushing the Olympics to go ahead during a pandemic — raises serious ethical questions for both parties.”

While Japan’s medical community has been consistent in its opposition to holding the event under current conditions, IOC member Dick Pound told the media in May that the Olympics would take place “barring Armageddon” and regardless of whether Japanese prime minister Yoshihide Suga explicitly asks that they be canceled. Bach caused additional outcry in late May by saying there was the “need to make sacrifices” (the IOC tried to roll back his comments by insisting he wasn’t referring to the health of Japanese people). Meanwhile, NBCUniversal CEO Jeff Shell said during an investor conference hosted by Credit Suisse that the pandemic-tainted Tokyo Games “could be our most profitable Olympics in the history of the company.”

Such remarks have played a role in denting the Olympic brand in Japan. “It’s just so blatantly crass, self-serving and careless for the fate of the Japanese people and the majority of humankind that hasn’t been vaccinated,” says Koichi Nakano, a professor of comparative politics at Sophia University in Tokyo.

Suga, who has become deeply unpopular over his handling of the pandemic and the Olympics, with a domestic approval rating hovering at less than 35 percent, insisted for months that his hands were tied and only the IOC has the authority to cancel or again postpone without Japan incurring steep financial penalties. Recently, however, facing an election in September, Suga appears to have wagered his career on Japan being able to pull off what he’s repeatedly promised will be “a safe and secure Olympics.”

Nakano says there is a reckless logic to Suga’s stance, despite the Olympics unpopularity in Japan. “If he cancels now, no one will thank him — even though it’s the right thing to do — because everyone will ask why he waited so long,” Nakano explains. “Whereas if he goes ahead with it, and somehow wins his gamble and the Olympics can be said to be a success, maybe he’ll have a chance to have a good election.”

Thanks in large part to the local public’s near ubiquitous vigilance in wearing masks, Japan has experienced relatively low levels of infection compared with major hotspots like the U.S., Europe, India or Brazil. But the country’s slow vaccination rollout, which has only just begun to pick up steam, combined with its gray demographics — a world-leading 28 percent of its populace is at least 65 years old — leaves the country dangerously exposed.

Officials estimate that 15,400 athletes will participate in the Olympics and Paralympics that take place throughout July and August. Including coaches, family members, media, IOC staff and sponsors, the two events are expected to bring about 93,000 people from 200-plus countries into Japan.

The IOC insists that more than 80 percent of athletes will be vaccinated and all of those attending will have to submit to complex testing protocols before leaving their home countries and once on the ground. They also must follow social distancing rules, refrain from using public transport during their first 14 days in Japan and agree to have their whereabouts tracked via cell phone. Still, public health experts both inside Japan and abroad have criticized the Olympic organizers’ COVID-19 prevention policies as dangerously inadequate. The New England Journal of Medicine published a paper in late May stating “the IOC’s determination to proceed with the Olympic Games is not informed by the best scientific evidence” and that the organization’s so-called playbooks detailing the rules for safe behavior during the games “are not built on scientifically rigorous risk assessment.”

“If there are tens of thousands of people coming into Japan from all over the world, nothing like 100 percent safety and security will be possible in a broad sense,” says Kentaro Iwata, an infectious disease specialist at Kobe University Hospital. “It is very likely that a new variant could be introduced and then spread.”

The IOC and Suga, in alternating statements, have said that holding the Olympics will create hope and serve as “proof of human victory against the coronavirus.”

But that message itself is irresponsible, experts like Nakano say. “The world has not triumphed over COVID-19, far from it,” Nakano explains. Although vaccination campaigns in the richest nations of the West have pushed caseloads downward, vast swaths of the globe are remain vulnerable. As of June 10, more people worldwide had died of COVID-19 in the first half of 2021 — 1.88 million — than in all of 2020 combined.

Caseloads in Japan have declined recently as warmer weather has drawn people outdoors, but there are still more than 25,000 active COVID-19 infections in the country as the dangerous Delta variant that first emerged in India gains in prominence. Iwata says that telling the country that conditions are safe enough to hold a global sporting celebration will lead to the Japanese public letting its guard down, which in turn will inevitably lead to greater loss of life. “Holding the Olympic Games will only create new opportunity for infection and new social pressure to spread the disease, instead of preventing it,” he adds.

During his remarks to bankers at Credit Suisse in mid-June, NBCU’s Jeff Shell likened the public health concerns in Japan and elsewhere to pre-event jitters: “I lived in London: everybody was worried about the traffic; and last time it was Zika. And then once the Opening Ceremony happens, everybody forgets all that and enjoys the 17 days.”

The risk for NBC, the IOC and Suga is a post-Olympic wave of COVID-19. Adds Boykoff: “If the Olympics does go wrong, get ready for the plausible deniability festival where everyone who was responsible for it points at everyone else.” 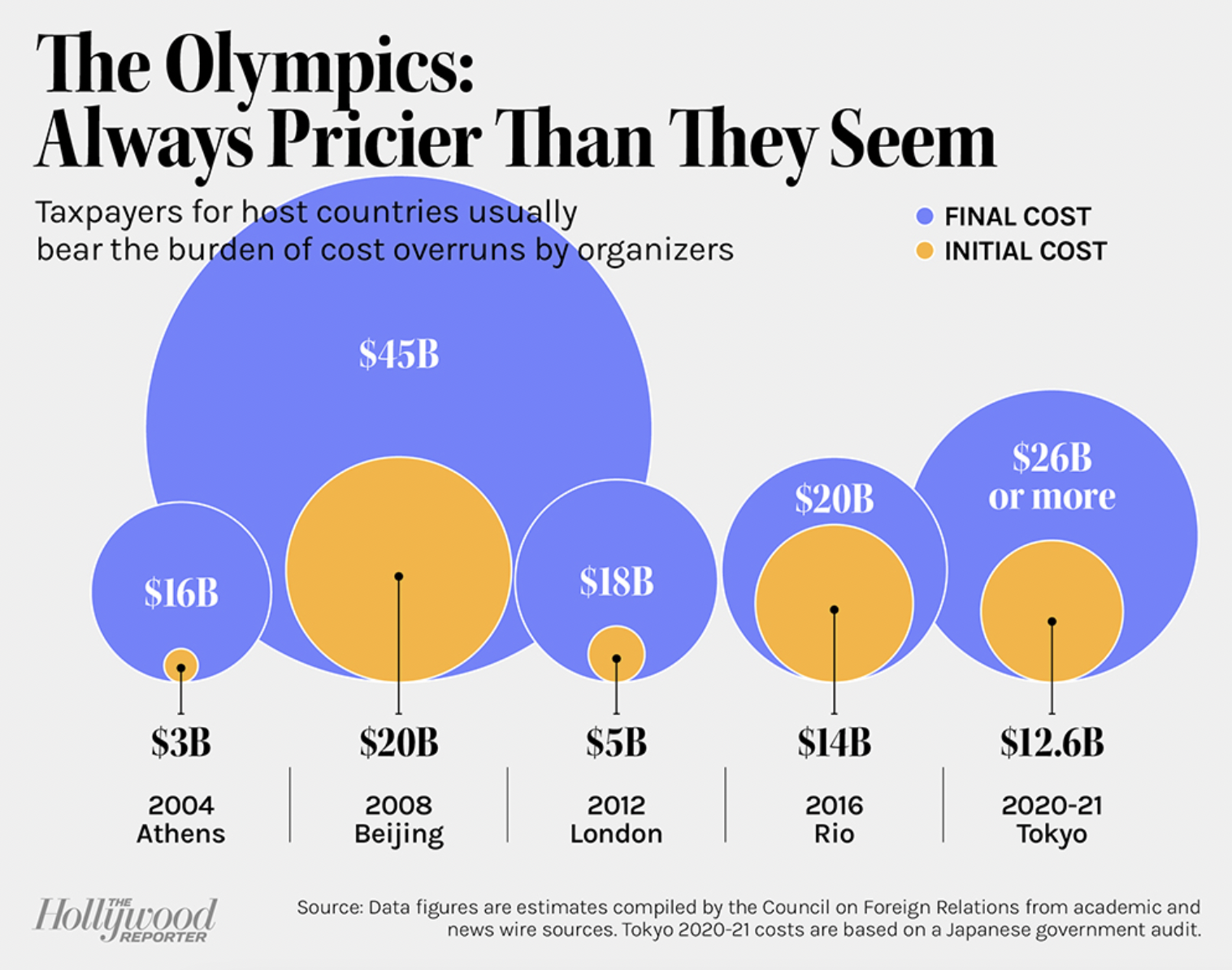