Many employers hold off on big renovations as office workers return

By Andy Peters, The Atlanta Journal-Constitution

When workers return to Randstad’s Cobb County office this fall they may not recognize the place.

Gone are the rows of cubicles. Tables of different shapes and sizes are spread about with plenty of room to walk around. Many workstations let employees switch between sitting and standing.

“Everything is 100% new,” said Dean Jones, Randstad’s vice president of workplace. “We completely gutted it down to the concrete floor and the ceiling.”

The Dutch staffing company’s U.S. headquarters, located in a 15-story building at the Cobb Cloverleaf interchange, has been empty since March 2020. Managers hope the changes will make the 600 workers assigned to the office want to come back as often as possible.

Despite a surge in new COVID-19 cases and low vaccination rates, many big metro Atlanta employers hope to bring most staff back to offices this fall after more than a year of remote work.

The offices that employees left might be different when they return — but probably not like at Randstad.

Most have yet to pull the trigger on major changes, though, instead playing a waiting game to see how big they need to go and what the future should look like.

Instead, small additions and minor adjustments have been the norm, like adding more hand-sanitizing stations or installing foot pedals on bathroom doors.

Many employers are still “in the wait-and-see category,” said Erin Greer, an interior designer in the Atlanta office of design firm Gensler. 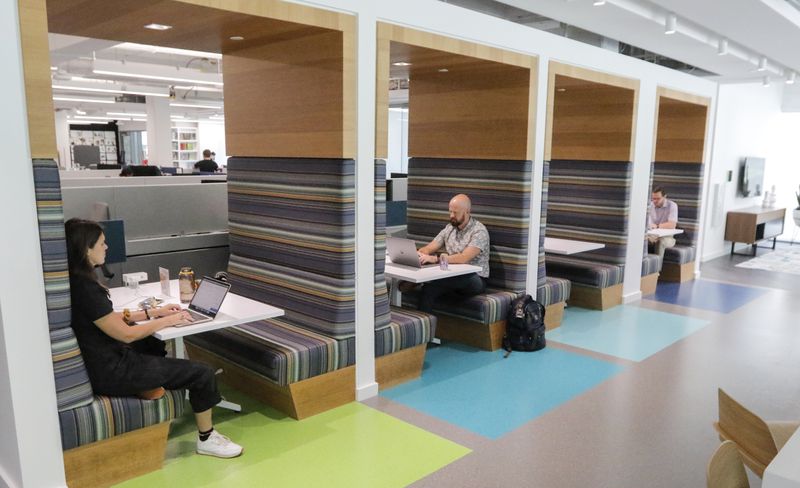 About 39% of U.S. office construction activity through the first six months of this year involved renovations instead of new construction, only slightly higher than the 10-year average of 37%, according to Dodge Data & Analytics. Randstad’s project is a renovation because it is not a new building.

Employers believe having workers in the office can foster esprit de corps among staff. At the same time, they must ensure workspace safety.

They also know that some staffers will keep working from home, but they don’t know how many. They run the risk of spending big bucks on redesigns for smaller crowds than they expected.

In a Deloitte survey last fall, three-quarters of CEOs said they’ll need less office space than before the pandemic. But if more employees show up than expected, they may have nowhere to sit. On the other hand, social-distancing measures may require more space but for fewer people.

Randstad eliminated some desks to generate extra space. That lowered its seating ratio from one chair for every employee to one for every 0.6 employees. The company plans to bring its workers back next month.

Stratix, which manages and repairs smartphones on behalf of businesses, hospitals and schools, required that all 300 employees be in the office five days a week before the pandemic. It switched to a hybrid model in June 2021.

The company redesigned its Peachtree Corners office with new furniture before the pandemic hit. But it found other ways to tweak the office for safety.

It installed large mirrors in hallways so employees can see around corners to avoid bumping into each other. And ice machines that utilized a scoop in a large ice bin were replaced with automated ice makers that drop ice into containers.

“No one ever wanted to put their hand inside an ice machine, even before the pandemic,” said CEO Louis Alterman.

Interface, the commercial floor covering maker, went further. It overhauled its Midtown headquarters to provide a more appealing place to work — and a showroom for prospective corporate clients. The company installed its own carpet products, using colored sections to designate where small groups can meet. The carpet also directs foot traffic to prevent unsafe clustering of workers.

Some open-office floor plans can get noisy, said Greg Minano, chief human resources officer at Interface. Its renovation allows for “dozens of spaces across our building that are designed for temporary, or private sessions,” without infringing on the privacy of other workers.

The semi-private workspaces are created by moving portable partitions manufactured by Steelcase, a new product linedeveloped in response to the pandemic.

“They help create spaces that feel very secure and private, but at the same time you’re not on top of your neighbor,” said Alison Millsaps-Morris, a senior sales executive at Interface.

Air-quality and ventilation experts say indoor workspaces can be made safer by increasing outside air, using ultraviolet lamps as a disinfectant and installing higher-rated air filters that block more harmful particles.

WeWork, which rents out shared office workspaces, has spent “tens of millions of dollars on updating hygiene and safety” globally, including boosting outdoor air supply, said Errol Williams, an Atlanta-based vice president at the company.

RocaPoint Partners and Georgetown Co. included ultraviolet lighting in the HVAC system of a new four-story officebuilding they’re scheduled to open later this year at the Halcyon mixed-use development in Forsyth County. 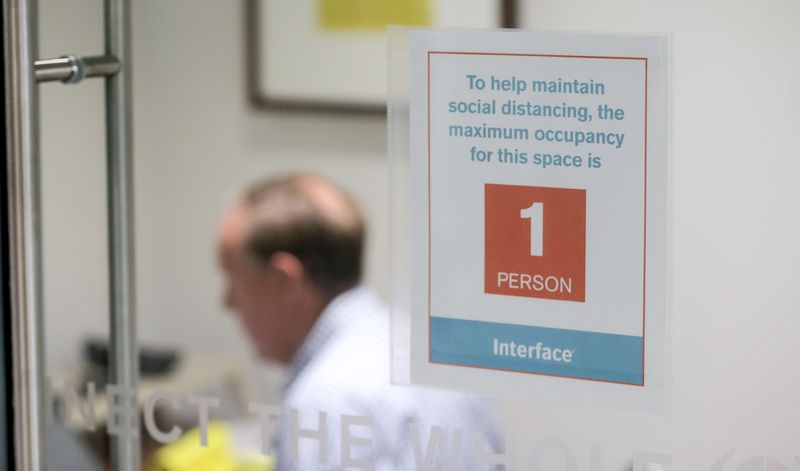 But Harvard University public health expert Joseph Allen warned that many office buildings in the U.S. had not upgraded air ventilation and filtration as of earlier this year.

Most office work, though, obviously will still be done indoors.

Randstad hired Gensler to design a space that encourages personal interactions between employees, yet also gives them private space to work on an important assignment.

“Sometimes you may want heads-down time, so you reserve a desk,” said Jones at Randstad. “Or you may want to work in a collaboration area with other teammates. It all depends on the type of work day you have planned.”