By Kiersten Willis, The Atlanta Journal-Constitution

Tyrese Gibson said he was going for a “regal vibe” with his home. One look at it, and you’ll know why.

The star of “F9: The Fast Saga,” gave Architectural Digest a tour of his Atlanta mansion. To quote another performer who calls the Big Peach home, it gives new meaning to the lyric “lifestyles so rich and famous Robin Leach will get jealous.”

The 1980s series “Lifestyles of the Rich and Famous” was an inspiration for the Los Angeles native.

“My first instinct was like, I can’t believe human beings can actually own Rolls-Royces and castles!” Gibson said. “But eventually that TV show gave me the audacity to believe that it was possible to have these things, to break the cycle of poverty.”

Gibson’s 25,000-square-foot house has six stories and an elevator. There are seven bedrooms. Touches of luxury are found throughout the singer’s primary bedroom and bathroom. His headboard features 24-karat gold buttons and the bathroom is floor-to-ceiling marble.

Mona Stephen, owner of Atlanta-based M One Design Group, is responsible for some of the French Chateau-style mansion’s livable opulence.

Stephen accessorized each room in weeks, while Sue Wishengrad, designer and owner of Los Angeles–based Sue Wishengrad’s Trade Secrets, was responsible for the furniture. She also walked through the floor plan with the former owner, who spent $300,000 on the kitchen.

Gibson’s Buckhead mansion was the setting for former Atlanta Mayor Kasim Reed’s high-profile birthday party. Reed announced he’ll be running for mayor at the June 10 bash. Gibson was right beside him on his winding staircase. Nearby, Bumblebee, one of two 16-foot-tall Transformer statues in the home, stands guard. Gibson, who starred in the “Transformers” franchise, said the statues — the other is Optimus Prime — will be part of Voltron Studios Hollywood, the full-service film studio he’s building in Atlanta. 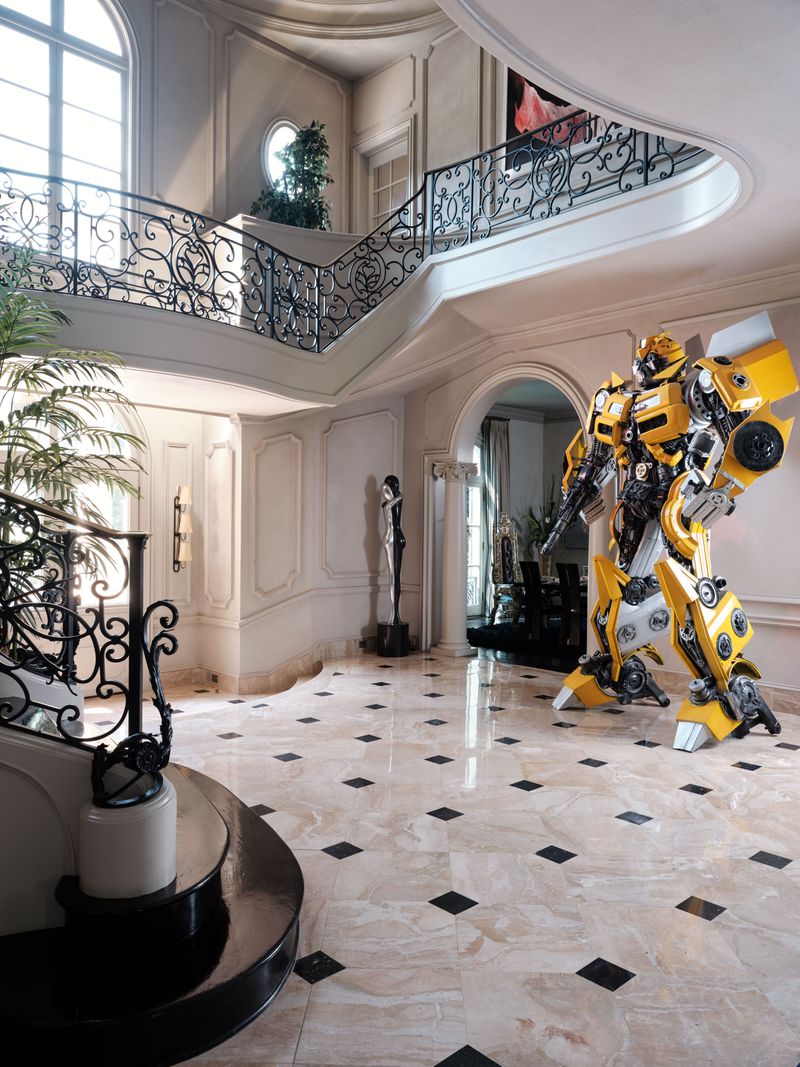 The home also features a 2-acre backyard. There’s a pool and an outdoor theater with a 4k projector and a waterproof screen.

“It’s completely isolated. It’s surrounded by greenery,” Gibson said of the property. “When you come home, you wanna feel safe.”

Gibson’s home is complete with a recording studio, board room, indoor theater and a man cave.

Now that the star calls Buckhead home, he’s listed his Los Angeles dwelling for sale. He bought that house for $1.385 million in 2011. It was listed for $3.5 million in May, according to the Los Angeles Times.